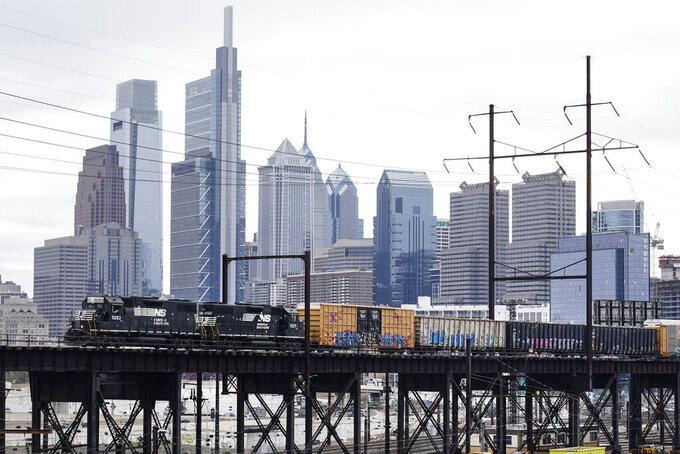 FILE - In this March 31, 2021 file photo, a Norfolk Southern freight train moves along elevated tracks in Philadelphia. Norfolk Southern’s profit improved in the first quarter as the railroad hauled 3% more freight while the economy continued to recover from thee coronavirus pandemic. The railroad said Wednesday, April 28 that it earned $673 million, or $2.66 per share, during the quarter. (AP Photo/Matt Rourke, File)

OMAHA, Neb. (AP) — Norfolk Southern's profit improved in the first quarter as the railroad hauled 3% more freight while the economy continued to recover from the coronavirus pandemic.

The railroad said Wednesday that it earned $673 million, or $2.66 per share, during the quarter. That was up from $381 million, or $1.47 per share, a year ago when Norfolk Southern's profit was weighed down by a one-time charge of $385 million. Without that charge, profit was up 1%.

The results beat Wall Street expectations. The average estimate of five analysts surveyed by Zacks Investment Research was for earnings of $2.55 per share.

"The reopening of the economy provides meaningful tailwinds for continued strength in both the consumer and manufacturing sectors,” said Jim Squires, the railroad's chairman, president and CEO.

Norfolk Southern reiterated that it expects its revenue to grow roughly 9% this year as industrial and consumer-related shipments remain strong.

The railroad cut its expenses 3% to over last year’s adjusted results to $1.6 billion as it continued to overhaul its operations to improve efficiency. If last year’s one-time charge were included, expenses would be down 21%.

Edwards Jones analyst Jeff Windau the railroad delivered a solid quarter while continuing to improve its operations. He said Norfolk Southern was able to handle the increase in volume without adding much costs by using longer trains.

“When you add a little volume, you're really able to take advantage of a more efficient operation,” Windau said.

The Norfolk, Virginia-based company is one of the nation's largest railroads, and it operates about 19,500 miles of track in 22 eastern states and the District of Columbia

Norfolk Southern shares have climbed 19% since the beginning of the year, while the S&P’s 500 index has climbed 11%. The stock has climbed 69% in the last 12 months.

Elements of this story were generated by Automated Insights (http://automatedinsights.com/ap) using data from Zacks Investment Research. Access a Zacks stock report on NSC at https://www.zacks.com/ap/NSC