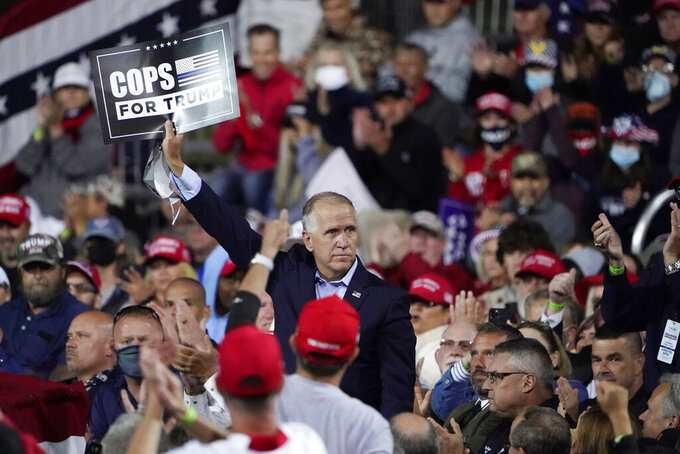 FILE - In this Sept. 19, 2020 file photo, Sen. Tom Tillis, R-N.C. holds a sign as President Donald Trump speaks at a campaign rally at the Fayetteville Regional Airport in Fayetteville, N.C. North Carolina Democrats were hoping this November they would break the backs of Republicans, who, after dominating state politics for much of the past decade, saw their power erode in the 2016 and 2018 elections. Instead, state Democrats had little to tout after Election Day beyond Gov. Roy Cooper’s close yet expected reelection, a narrow victory for Attorney General Josh Stein, and picking up two U.S. House seats largely handed to them by redistricting in 2019. (AP Photo/Chris Carlson, File)

RALEIGH, N.C. (AP) — The North Carolina State Board of Elections certified the results of the November general election on Tuesday, awarding the state's 15 electoral votes to President Donald Trump.

The certification does not formalize the results in the statewide race for state Supreme Court chief justice between Republican Paul Newby and Democrat Cheri Beasley. Out of nearly 5.4 million cast, Newby leads by about 400 votes, as of Tuesday. Both candidates have pending protests in the race that went to a recount.

The five-member board tasked with overseeing elections voted 4-1 to certify the results. Former Republican state Sen. Tommy Tucker said he opposed certification because of a legal settlement approved by the state board and appeals courts that, among other things, extended the deadline for counties to receive mail-in ballots postmarked by Election Day.

Tucker, who was not on the board at the time the settlement was reached, called the agreement “unconstitutional," expressed concerns about the deliberative process that went into it and said the board should have gone through the General Assembly if it wanted to make changes to election laws.

Despite multiple lawsuits by GOP leaders in state and federal court over the extended deadline, both the U.S. Supreme Court and North Carolina's highest court declined to intervene before the election.

Jeff Carmon, a Democratic member of the board, called Tucker's comments “dishonorable” and stressed the need to make it easier for people to vote amid the coronavirus pandemic. Damon Circosta, chairman of the state board, said Tucker's decision not to certify the results was disappointing.

“Nothing in this conversation or that happened today should detract from the fact that this election was secure,” Circosta said. "This election was safe. This election was conducted in the midst of a pandemic, and yet, we achieved record turnout. Anything other than gratitude for the people working on this, this does not seem to sit well with me.”

Three Democrats and one Republican approved the certification.

The 2020 election in North Carolina saw historic participation, which was partially fueled by a sharp rise in mail-in voting. More than 1 million voters cast their absentee ballots by mail, up from 191,601 cast in 2016.

Over 5.5 million of the more than 7.3 million registered voters cast ballots in this year’s election. The 75% voter turnout surpassed the 69% participation seen in November 2016.

Follow Anderson on Twitter at https://twitter.com/BryanRAnderson. Anderson is a corps member for the Associated Press/Report for America Statehouse News Initiative. Report for America is a nonprofit national service program that places journalists in local newsrooms to report on undercovered issues.