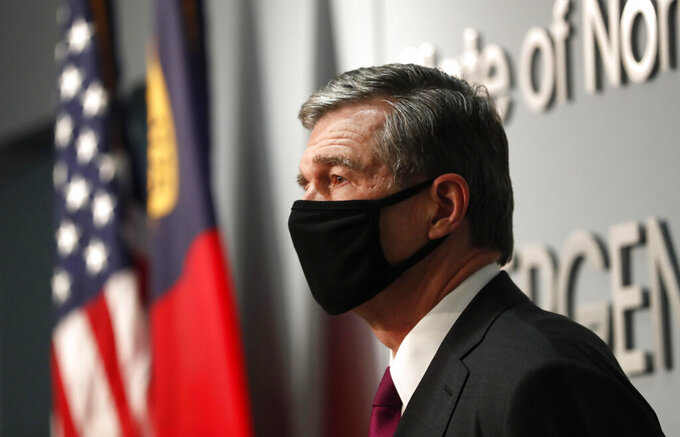 Gov. Roy Cooper listens as Dr. Mandy Cohen, secretary of the N.C. Department of Health and Human Services, answers a question during a briefing at the Emergency Operations Center in Raleigh, N.C., Wednesday, Oct. 28, 2020. Democratic Gov. Roy Cooper signed an executive order on Wednesday preventing landlords from evicting tenants who are unable to pay their rent.(Ethan Hyman/The News & Observer via AP)

The mild-mannered governor has often been reluctant to criticize President Donald Trump. He has been generally praised for his handling of the coronavirus pandemic.

However, some complained he was slow to reopen K-12 public schools and certain parts of the economy. Forest often criticized the shuttering of small businesses, including bars, bowling alleys and gyms.

Cooper had banked on the support of voters who approved of his handling of the coronavirus, while Forest had aimed to appeal to business owners and K-12 public school parents dissatisfied with the state’s slow reopening.

“It’s time to do the hard work of healing because North Carolinians deserve that," Cooper said in an acceptance speech minutes after The Associated Press called the race in his favor. “It’s time that we focus on what we have in common rather than on our differences. Regardless of our political beliefs, most all of us want people to be healthy, have a good paying job and to live in safe communities.”

Cooper highlighted issues of health care, education and racial inequality and said it was time to move on from a costly, combative gubernatorial election.

The race attracted attention from outside groups, which spent millions to shape voter attitudes, and was among a few being closely watched nationwide.

Cooper took in more than $17 million between July 1 and Oct. 17, with over $11 million being given by political party committees and $281,000 coming from other political committees, according to the campaign’s latest quarterly report filed with the State Board of Elections.

Forest raised a substantially smaller $4 million during the same July 1 to Oct. 17 period. The campaign filing shows $532,000 came from political party committees and nearly $100,000 from other political committees.

After the race was called, Forest alluded to the discrepancy and struggle to boost his name recognition at a time when Cooper has gotten more attention from the news media because of the coronavirus pandemic.

“We were outraised by massive amounts of numbers, not only tens of millions of dollars, money coming in from all over the country for this governor's race, but having a governor that's an incumbent, and, with coronavirus, on TV every day for nine months," Forest said. “What an uphill battle it was, and we're like, that close.”

Forest said he unsuccessfully tried multiple times to call Cooper on the phone to concede.

“I did not get through to him, but I do wish him all the best,” Forest said. “We will be praying for the governor and his family and his leadership as we move forward and praying for the people of North Carolina. We certainly love this state and wish all goes well.”

A spokesperson for the Cooper campaign did not immediately respond to a text message seeking comment about whether Cooper had received a call and not accepted it.

Montana is expected to have the most competitive gubernatorial contest in the country. U.S. Rep. Greg Gianforte, a Republican, is running for an open seat against Democratic Lt. Gov. Mike Cooney. Despite not having any major media markets in the state, campaigns and the parties’ governors groups spent more than $24 million on the election through September. In Missouri, Republican Gov. Mike Parson faces a strong challenge from Nicole Galloway, the state's Democratic auditor. The contest in Missouri is Democrats' best hope for flipping a governor's seat this year.

In North Carolina, Cooper avoided the physical campaign cycle this election, instead choosing to participate in a small number of virtual gatherings. Supporters of the mild-mannered Democrat believe he’s responsibly prioritized public safety.

“I think Roy Cooper’s doing a great job,” said Ryan Commedo, a Fayetteville resident who took part in early, in-person voting. “He’s handling everything with the coronavirus and giving updates that we don’t get from the president. I think he cares about the people.”

Forest had hosted several large in-person events with little to no mask wearing or physical separation between attendees. The lieutenant governor had called for a more aggressive reopening of businesses and schools and vowed to immediately repeal the statewide mask mandate Cooper enacted in response to rising coronavirus cases.

It was too early to call the U.S. Senate and presidential contests in North Carolina. Cooper pushed for all votes to be properly accounted for.

“For months, the nation has focused on North Carolina, and it's come down to counting the votes,” Cooper said. “I know that there are a lot of important races that are still too close to call, and we must let the process work to be sure that all the legal votes are counted.”