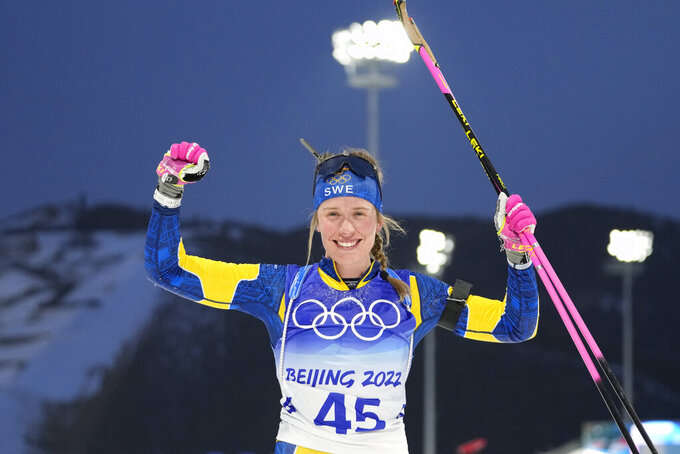 Elvira Oeberg of Sweden raises her fist after crossing the finish line during the women's 7.5-kilometer sprint competition at the 2022 Winter Olympics, Friday, Feb. 11, 2022, in Zhangjiakou, China. (AP Photo/Frank Augstein)

ZHANGJIAKOU, China (AP) — Marte Olsbu Roeiseland of Norway put in the best performance of her career when it mattered the most — on an Olympic stage, for an Olympic gold medal.

Another gold medal, that is.

Roeiseland, the overall World Cup leader and sprint leader, hit all 10 targets and finished the 7.5-kilometer women's sprint race in 20 minutes, 44.3 seconds for her third medal — and second gold — at the Beijing Games.

“My ski time has never been better and I was really focused on the shooting range today,” she said. “I think I did a really good job in my head before today’s race, and for that I’m really happy. It feels great.”

The Norwegian was on the gold-medal winning mixed relay team during the opening biathlon race of the Winter Games and won bronze in the 15-kilometer individual race earlier in the week.

Sweden’s Elvira Oeberg, in her first Olympics, also shot clean and skied to silver, 30.9 seconds back. Her sister, Hanna, won a gold medal in the 2018 Olympics in the individual race. She finished 19th, 1:34.8 back in the sprint.

“I’m super proud that I shot clean when it mattered the most,” Oeberg said. “It feels really good. Now we are two Olympic medalists in the family. It’s crazy.”

The sisters embraced and cried after the race.

“She said that she was super proud of me and that I really deserved this medal,” Oeberg said. “Those are amazing words to hear.”

Dorothea Wierer of Italy came in 37.2 seconds behind Roeiseland for bronze, her first individual Olympic medal. She won bronze in the mixed relay in the 2014 and 2018 Winter Games.

“I’m really happy today,” Wierer said. “Normally, I’m not so good in the sprint. I’m better normally in the pursuit or mass start, so it was really cool that it worked out like this.”

Wierer is known for her fast and accurate shooting, some of the best on the World Cup circuit.

“I was lucky on the prone shooting. The last one closed just after one second,” she said. “The standing shooting was really good, and the last loop on the track, it was really long. I was just so tired.”

Temperatures for the sprint race hovered around minus-6 C (21F) — balmy compared with the minus-16 C (3.4F) last weekend. More important for the shooting, there was no wind.

Roeiseland uncharacteristically missed two shots in the 15-kilometer event — one prone and one standing. That added two minutes to her time.

“After the 15k, I was a bit disappointed because I missed the last shots, so I have worked a lot for three days now to try to focus on today and forget about the last race," Roeiseland said.

She won silver in the 2018 Winter Games sprint race. Laura Dahlmeier of Germany won gold, but she has since retired. Roeiseland finished second in the overall standings last season, just behind her teammate Tiril Eckhoff. But she's stayed on top this season.

“This year I have been enjoying biathlon even more,” she said. "I just feel so lucky that I am here and I can race good races.”