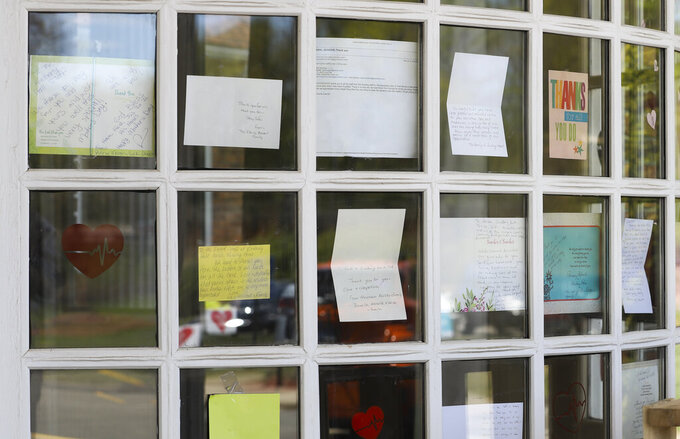 FILE - This May 14, 2020, file photo shows notes for healthcare workers taped in the front window at the Kimberly Hall North nursing home in Windsor, Conn. Nursing home residents account for nearly 1 in 10 of all the coronavirus cases in the United States and more than a quarter of the deaths, according to an Associated Press analysis of government data released Thursday, June 18. (AP Photo/Chris Ehrmann, File)

WASHINGTON (AP) — Nursing home residents account for nearly 1 in 10 of all the coronavirus cases in the United States and more than a quarter of the deaths, according to an Associated Press analysis of government data released Thursday.

As federal data collection becomes more robust, a clearer picture is emerging of the ravages of COVID-19 in nursing homes. About 1.4 million older and medically frail people live in such facilities, a tiny share of the American population that has borne a crushing burden from the pandemic. Most residents have been in lockdown since early March, isolated from families and friends, even in death.

AP's analysis of data from the Centers for Medicare and Medicaid Services found that nearly half of the more than 15,000 nursing homes have reported suspected or confirmed cases of COVID-19 as of June 7. About 1 in 5 facilities — or 21% — have reported deaths.

Nationwide, nursing homes reported nearly 179,000 suspected or confirmed cases among residents and 29,497 deaths. The latest figures include about 95% of nursing homes.

Earlier this week, a special House panel on the coronavirus pandemic launched an investigation into the crisis in nursing homes.

The vulnerabilities are many. Residents live in close quarters, usually two to a room before the pandemic. They shared dining and recreational areas, and physical therapy gyms. Many staff aides work in several facilities, so they can unwittingly carry the virus from one nursing home to another.

Lawmakers are concerned “that lax oversight by the Centers for Medicare and Medicaid Services and the federal government’s failure to provide testing supplies and personal protective equipment to nursing homes and long-term care facilities may have contributed to the spread of the coronavirus," said committee Chairman James Clyburn, D-S.C. “Despite CMS’s broad legal authority, the agency has largely deferred to states, local governments, and for-profit nursing homes to respond to the coronavirus crisis.”

But CMS chief Seema Verma has said that “trying to finger-point and blame the federal government is absolutely ridiculous.” She says nursing homes with poor ratings on infection control are more likely to have high numbers of cases, a claim that academic researchers say they have not been able to substantiate.

The AP's analysis also found that:

— Among states, New Jersey had the highest proportion of nursing homes with suspected or confirmed COVID-19 cases, about 82%. This comprises 299 of the state’s 363 nursing homes.

— Massachusetts had the highest proportion of nursing homes with COVID deaths, nearly 66%. That represented 247 of the state’s 376 nursing homes.

— In 30 states, nursing homes’ share of COVID-19 deaths was higher than the national average of 26.7%. In some of the hardest-hit, such as Connecticut and Massachusetts, more than one-third of the state’s deaths occurred in nursing homes.

Consumers will have access to coronavirus information through Medicare's NursingHomeCompare website. They will be able to look up individual nursing homes to learn the number of cases and deaths among residents and staff. Data are expected to be updated weekly.

CMS head Verma says nursing home reporting required by her agency will “constitute the backbone of a nationwide COVID-19 surveillance system” to identify and contain expected rebounds of the virus as communities reopen. The nation's first major outbreak, reported in late February, was in a Seattle-area nursing home.

The nursing home industry says it's going to need much more help from the federal government to regularly test staff and residents. Facilities have also lacked adequate supplies of protective gear.

“Long-term care residents and staff need to be a priority for supplies and support,” Mark Parkinson, head of the nursing home industry group American Health Care Association, said Thursday in a statement about the new data. "It’s time that America rally around our nation’s seniors and caregivers just as they did with hospitals.”

The federal data release comes as many states have yet to meet a White House goal to test every resident and staff member for COVID-19. That was supposed to have happened before the end of May.

Also unmet is a separate federal goal for state inspectors to assess all nursing homes for infection control. There is no deadline, but federal officials are growing impatient. As of a couple of weeks ago, only a few states had inspected all facilities.

Even before the coronavirus pandemic, many nursing homes had “persistent” problems with infection control, according to a recent report from the Government Accountability Office, a watchdog agency for Congress.

Thorough, methodical, ongoing testing of residents and staff is considered one of the keys to making nursing homes safer.

Federal officials have recommended a one-time test for all residents and staff, as well as weekly retesting of staff. Nursing homes should retest residents weekly until none test positive.

Verma says states should use “extreme caution” before reopening nursing homes to visitors.