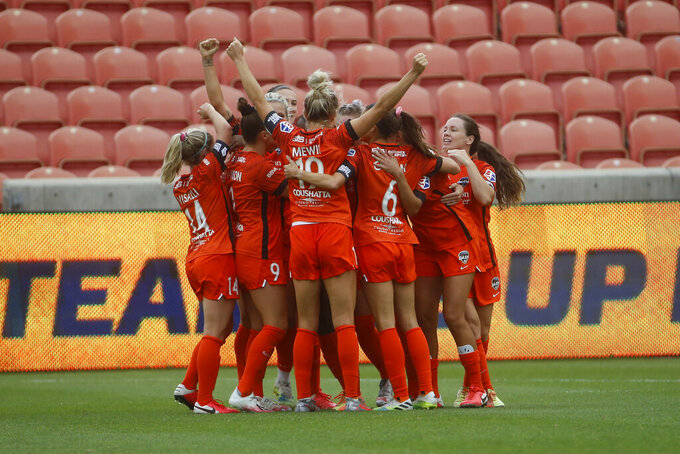 Houston Dash forward Rachel Daly (3) celebrates with her teammates after scoring against the Portland Thorns during the second half of an NWSL Challenge Cup soccer semifinal match Wednesday, July 22, 2020, in Sandy, Utah. (AP Photo/Rick Bowmer) 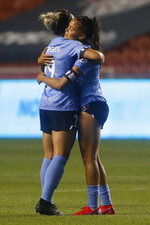 As Portland Thorns coach Mark Parsons got ready to head home after his team was eliminated from the Challenge Cup, he said he was honestly surprised the National Women's Soccer League pulled off the tournament.

“I was one who, when I first heard it, I was like, 'No chance. This is impossible,'” he said. “The power of leadership and the players’ association and all the owners and the clubs to make this possible, it's one of the best experiences I've had in a long, long time.”

After nearly a month during which the teams were sequestered in Utah, the tournament heads into the finals Sunday with its extensive precautions having held up in the face of rising COVID-19 cases nationwide.

“Having the belief that you can do live sports and you can do it effectively, safeguard players in preseason and then do it in a bubble, I think we’re walking away, all of us, with confidence in the medical protocols that we put in place," league Commissioner Lisa Baird said Friday.

With no cases reported during the tournament, the league's successful efforts have been noteworthy as other sports — including the NBA and Major League Baseball — embark on their return to play.

The NWSL was the first professional team league to return to play in the United States after the sports world had been shut down by the pandemic. The league had been riding high before then, boosted in the wake of last summer's World Cup by national sponsors and a new broadcast deal with CBS. Baird had also come aboard after a successful run as marketing director for the U.S. Olympic and Paralympic Committee.

The plan to host the Challenge Cup was ambitious, devised with the help of a panel of more than a dozen medical experts. Players were sequestered at the expansive training facility for the Utah Royals and Real Salt Lake of Major League Soccer. The limited size of the league — just nine teams — also worked in the plan's favor.

But it hit a snag a week before the tournament was set to start when the Orlando Pride was forced to withdraw after a number of positive coronavirus tests.

That took the Challenge Cup field down to eight teams, and organizers had to hastily redo the schedule. As a result, all the teams made the quarterfinals, with performance in the group stage determining seeding.

There were also some high-profile players who opted out of the tournament. U.S. national team players Megan Rapinoe, Christen Press and Tobin Heath decided not to play out of personal concerns.

In the end, the soccer was generally better than expected despite limited full-team practices due to stay-at-home orders in many communities. The tournament also showed the parity in the league, with the sixth-seeded Chicago Red Stars set to meet the No. 4 Houston Dash in the televised final Sunday.

“We came in with an objective, I think, which was to raise the profile of the league and what we’re about," Baird said. "And remember the core of that is always about the quality of play, the outstanding players we have, including the more than 50 players from all around the world at play in our league. I think right now that what we’re proving is that the awareness of who we are, what we are, has gone up."

The league also celebrated expansion during the Challenge Cup. A Los Angeles team — backed by actress Natalie Portman and a majority-woman ownership group — was announced earlier this week and will begin play in 2022. An expansion team in Louisville joins the league next year.

In a state of the league news conference Friday, Baird was asked if there had been interest in additional expansion teams during the course of the tournament. “Yes,” she said, laughing. “Other than that I'm not going to say anything.”

Up next for the NWSL is answering a tricky question about how to have some kind of regular season or even exhibition games to keep momentum going. With COVID-19 cases and deaths still on the rise, it remains to be seen what a season could look like, but Baird said the league will use the lessons learned at the tournament.

“Anything that you’re doing right now, you’ve got to be flexible and nimble. But our approach -- and I’m not saying it’s the right approach for everybody -- is come up with what we call the end-to-end solution. And that is absolutely about health and wellness, but it’s all also about putting together tournament or competition formats that our players can excel and thrive in," Baird said. "And I think the tournament format for this time was exactly the right format.”