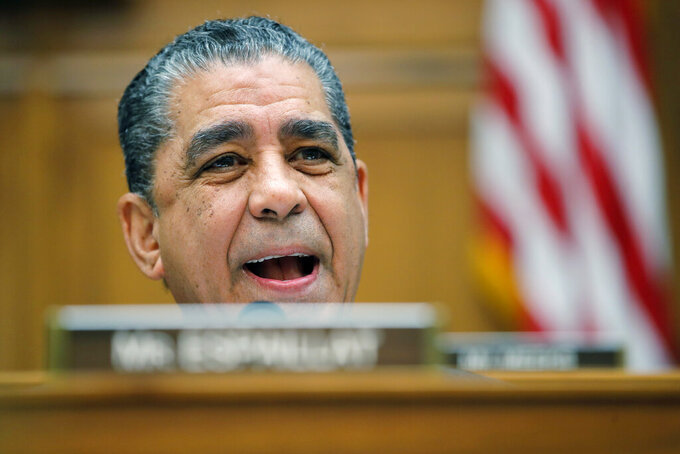 FILE - In this Feb. 28, 2020 file photo, Rep. Adriano Espaillat, D-N.Y., speaks during a House Foreign Affairs Committee hearing in Washington. Espaillat says he has the coronavirus. The New York Democrat's announcement Thursday makes him the latest House member to report testing positive since dozens huddled together for protection during the Jan. 6 mob attack on the U.S. Capitol. (AP Photo/Carolyn Kaster)

NEW YORK (AP) — U.S. Rep. Adriano Espaillat said Thursday that he has the coronavirus, making the New York Democrat the latest House member to report testing positive since dozens huddled together for protection during the Jan. 6 insurrection at the U.S. Capitol.

Espaillat said in statements that he wasn't experiencing any symptoms, was quarantining at home and would keep up his work representing his Upper Manhattan district. He added that he'd received both doses of a COVID-19 vaccine, the second of them last week, and tested positive on Wednesday evening.

The federal Centers for Disease Control and Prevention say it typically takes a few weeks after vaccination for people to build immunity to the virus. But, the agency notes, experts believe that the vaccine can help prevent people from getting seriously ill even if they do get infected.

At least three other House members besides Espaillat have tested positive since the Capitol breach, when dozens of lawmakers were rushed to a secure location as supporters of President Donald Trump stormed and ransacked the building. Some members of Congress stayed for hours in the large room, while others were there for a shorter period.

An inquiry was sent to a spokesperson for Espaillat about whether he was among those lawmakers.

It’s not clear where and when lawmakers caught the virus, but the Capitol’s attending physician has told all House members they might have been exposed to someone in the room who had the virus. The physician, Dr. Brian Moynihan, urged all members to get tested.

Three Democratic members — U.S. Reps. Brad Schneider of Illinois, Pramila Jayapal of Washington, and Bonnie Watson Coleman of New Jersey — announced earlier this week that they had tested positive. The three blasted some Republican colleagues who declined to wear face masks even when offered them in the secure room, as seen on video that subsequently surfaced.

Espaillat, for his part, said the varying ages, ethnicities, races and genders of the newly infected lawmakers show that “COVID-19 does not discriminate, and why it is incumbent on each of us to prioritize social distancing from one another — even if that poses a temporary inconvenience — and wear a face mask.”

“The COVID-19 vaccine is just one part of a larger vigilance that we must all adhere to," he said.