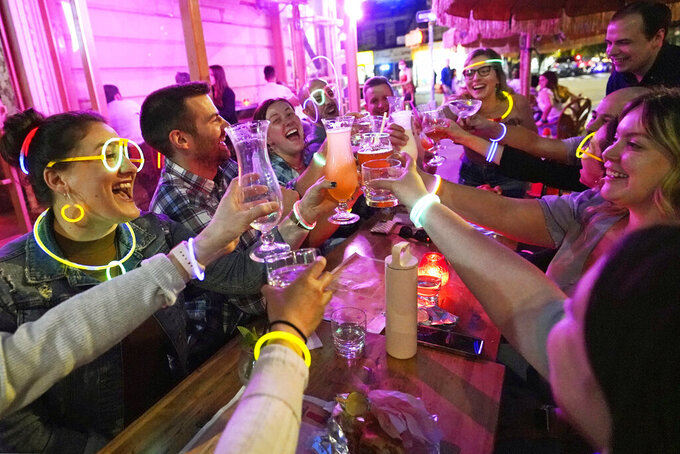 FILE - In this May 17, 2021, file photo, Emily Baumgartner, left, and Luke Finley, second from left, join friends from their church group in a birthday toast to one of the members, upper right, during their weekly "Monday Night Hang" gathering at the Tiki Bar on Manhattan's Upper West Side in New York. After a statewide midnight curfew on outdoor dining ended May 17, a similar indoor curfew for bars and restaurants ended on Monday, May 31 as coronavirus restrictions ease. (AP Photo/Kathy Willens, File)

Bars and restaurants no longer have to close at midnight across New York state, as its coronavirus curfew for indoor dining ended Monday.

Gov. Andrew Cuomo announced last month that the restriction would be lifted. With that, establishments can return to the closing times that their liquor licenses or other regulations allow.

A similar pandemic curfew for outdoor dining ended May 17, although some local governments have their own closing-time rules for outdoor tables.

“The lifting of the curfew is critically important,” the NYC Hospitality Alliance's executive director, Andrew Rigie, said in an interview earlier this month. The alliance advocates for restaurants and nightlife in New York City.

“We’re a 24/7 city, so there’s tons of people that would still be out eating and drinking after midnight,” Rigie said.

Gov. Andrew Cuomo said in a release Monday that the curfew's end “is the result of New Yorkers banding together, practicing safety precautions and getting vaccinated, so we can defeat the virus and work our way towards a new normal.”

In one sign of nightlife resuming, the comedy club Carolines on Broadway reopened Thursday and celebrated with a ceremonial ribbon-cutting Monday, featuring U.S. Senate Majority Leader Chuck Schumer and other dignitaries.

The club, like Broadway theaters and other entertainment venues, shut down March 2020 as the virus was on a staggering spike in New York City.

“To be able to see this club some back to life and to be able to make this person laugh and that person laugh, I’m super-excited about it,” comedian Donnell Rawlings, who headlined the opening shows, told WABC-TV last week.

“People have been cooped up so long. They want to do something. And what gets us through the most trying times of our lives? Comedy,” he said. “We have to find something to laugh at.”