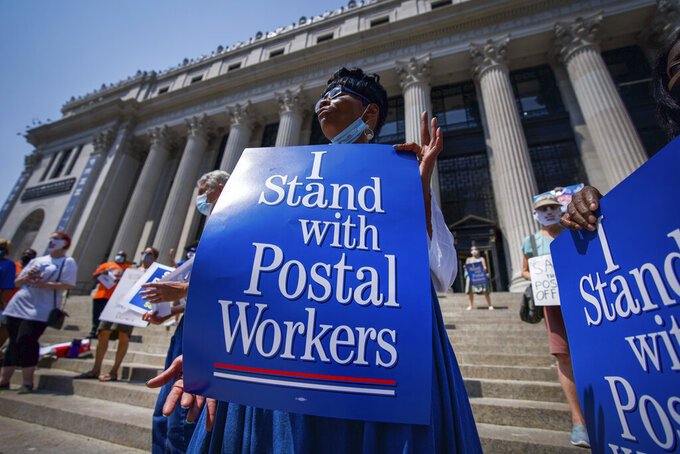 Retired postal worker Glenda Morris protests postal cutbacks, Tuesday, Aug. 25, 2020, in New York. Postmaster General Louis DeJoy told lawmakers Monday that he has warned allies of President Donald Trump that the president's repeated attacks on the legitimacy of mail-in ballots are "not helpful," but denied that recent changes at the Postal Service are linked to the November elections. (AP Photo/Robert Bumsted)

NEW YORK (AP) — New York’s attorney general added Tuesday to the growing pile of lawsuits seeking to halt disruptions to the U.S. Postal Service ahead of November's presidential election, saying several communities in her state have gone some days without mail.

Attorney General Letitia James, a Democrat, said the changes imposed by President Donald Trump’s administration amounted to voter suppression with the use of mail-in ballots expected to surge while people stay home because of the coronavirus pandemic.

Trump is an ardent opponent of voting by mail, even though he has voted by mail himself. He speculates that widespread use of mail-in ballots could lead to fraud.

“These changes are a thinly veiled attempt to advance the president’s own political agenda,” James told reporters on a conference call announcing the lawsuit.

Postmaster General Louis DeJoy announced last week that he was suspending new operational changes to mail service amid complaints that they had led to delivery slowdowns, but that it wasn't necessary to restore machinery and collection boxes already taken away.

Trump previously acknowledged withholding emergency aid from the postal service to make it harder to process mail-in ballots, but later altered his position, saying he wanted to speed up the mail, not slow it down.

Since March, according to James' lawsuit, the Republican president has publicly voiced opposition to mail-in voting on more than 30 occasions.

James' lawsuit, filed in federal court in Washington D.C., names Trump, DeJoy and the U.S. Postal Service as defendants. DeJoy, a former supply-chain CEO and major donor to Trump and the GOP, faced grilling questions from Congress in recent days over the changes.

The lawsuit, which seeks a court order to cancel the changes, is the third filed by state attorneys general over alterations to the postal service’s operations.

Last week, Washington state Attorney General Bob Ferguson and Pennsylvania Attorney General Josh Shapiro, both Democrats, filed lawsuits in collaboration with other states. James said those cases differed from hers, leading her to file a separate lawsuit. James’ lawsuit also includes Hawaii and New Jersey as plaintiffs, as well as the cities of New York and San Francisco.

“We have sought immediately to declare his actions as unconstitutional and to suspend all of those actions immediately, so that we can move forward in our effort to make sure that voting ballots are returned to respective board of elections in a timely fashion," James said.

Three communities near Buffalo, which together receive about 80,000 pieces of mail each day, did not get a single mail delivery on July 11, according to the lawsuit.

Some New York communities saw mail delivery skipped on at least three days in July and August; boxes of mail slated for delivery on Aug. 7 were still sitting in a Bronx postal facility a week later; and 173 Express Mail packages sent to the Buffalo area went undelivered from Aug. 10-12, the lawsuit said.

Beyond the potential impact on the election, James and members of the state's Congressional delegation who joined her conference call expressed concerns about the mail slowdown harming everyday lives by hampering deliveries of vital medications, perishable goods and payments.

DeJoy told lawmakers on Monday that election mail is his “No. 1 priority." He said he will authorize expanded overtime, extra truck trips and other measures in the weeks before the election to ensure on-time delivery of ballots.

“I am not engaged in sabotaging the election,” DeJoy said.