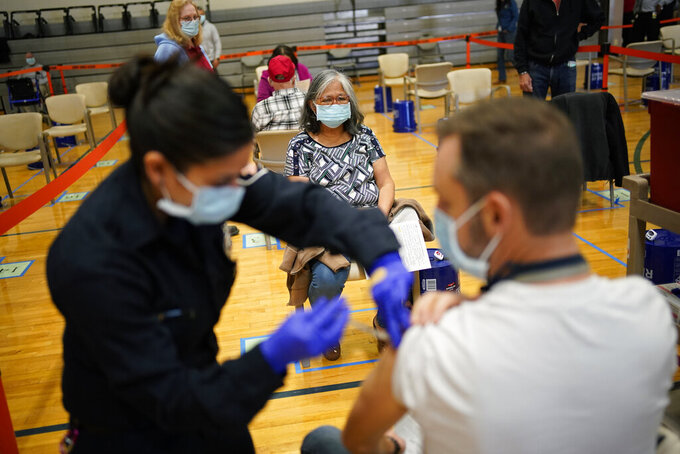 FILE - In this Feb. 17, 2021, file photo, people receive the COVID-19 vaccine at a vaccination site in Las Vegas. Coronavirus management officials acknowledged Wednesday, March 10, 2021, that some vaccination appointment slots are going unused in Las Vegas, and that more doses are available than are being administered at the area's two largest mass vaccination sites. (AP Photo/John Locher, File)

LAS VEGAS (AP) — Coronavirus management officials acknowledged Wednesday that some vaccination appointment slots are going unused in Las Vegas, and that more doses are available than are being administered at the area’s two largest mass vaccination sites.

However, state COVID-19 response chief Caleb Cage did not promise immediate changes or say during a conference call with reporters that the recipient pool would soon expand statewide to people 55 and older.

“We’ve had challenges with doses on shelves or appointments not being filled and those sorts of things,” Cage said, casting problems reported by the Las Vegas Review-Journal as growing pains in a huge vaccination effort.

Cage said the statewide coronavirus playbook is being shaped with local health districts, elected leaders and emergency managers according to the varied economies and workforces in the north, south and rural areas.

“Everyone’s goal is the same,” Cage said. “To get as many Nevadans vaccinated as possible.”

Public vaccine sites at ashman Center conference hall near downtown Las Vegas and at the Las Vegas Convention Center near the Strip can each deliver up to 4,000 doses per day.

In Reno, chief health officer Kevin Dick told reporters that vaccination efforts are keeping up with an increase in shipments of vaccines to Washoe County.

More than 540,000 vaccinations have been administered in Nevada, according to state health officials, including nearly 300,000 second Moderna and Pfizer doses. A vaccine by the Janssen subsidiary of Johnson & Johnson is now also available.

A study released Tuesday by University of Nevada, Reno School of Medicine researchers charted an increase in the number of people saying they would likely get the vaccine once it becomes available to them — up to 73% in January from 64% in December.

Dr. Mark Riddle, primary study investigator, said the results might reflect increased public confidence that vaccines are safe and effective and that people who have been hesitant are changing their minds.

Scientists generally believe the threshold for COVID-19 herd immunity — when enough people have had the virus or been vaccinated to stop uncontrolled spread — is higher than 70%.

The state Department of Health and Human Services on Wednesday reported 325 new COVID-19 cases statewide since Tuesday and 13 more deaths. That brought totals to 297,147 cases and 5,067 deaths since last March. Most infections and deaths have been in and around Las Vegas, the state's most populous area.

The state’s two-week positivity rate, measuring the number of infections among the number of people tested, has declined from a peak of 21.6% in mid-January to 6% on Wednesday. The World Health Organization goal is 5%.

— The nonprofit advocacy group Vegas Stronger is providing free ride credits through the rideshare company Lyft for people to get to vaccine appointments. Organization co-founder Dave Marlon said people can reach him by telephone or email to coordinate the credit. Lyft also partners with entities including CVS Health, the YMCA and other non-profit organizations.

— Officials in rural Nye County announced that government offices will reopen full-time and in-person next Monday. County Manager Tim Sutton said requirements for face coverings, social distancing and sanitization practices remain in place, and offices will restrict the number of people in lobbies. Many services will remain available online.