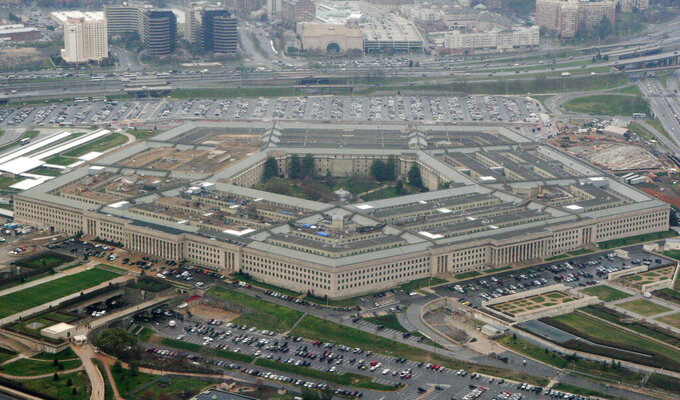 FILE - This March 27, 2008, file photo, shows the Pentagon in Washington. Reports of sexual assaults across the U.S. military increased by a very small amount in 2020, a year when troops were largely locked down for months as bases around the world grappled with the COVID-19 pandemic, according to U.S. officials. (AP Photo/Charles Dharapak, File)

WASHINGTON (AP) — Reports of sexual assaults among the U.S. military increased by a very small amount in 2020, a year when troops were largely locked down for months as bases around the world grappled with the COVID-19 pandemic, according to the Pentagon.

The annual report released Thursday showed that sexual assault reports involving service members went up by about 1%, compared with the 2019 totals. According to the report, there were a total of 7,816 reports in 2020, roughly the same as in 2019. Of those, 6,290 involved members of the military and occured during during their military service — a 1% increase over the 6,236 Service member reports received in 2019.

The report said that the number of assaults reported by civilian victims as well as those involving pre-enlistment attacks decreased.

Army and Marine Corps saw slight increases in the number of reports, while the Navy and Air Force saw small decreases. It is unclear how much of a role the pandemic played in the small increase in assaults last year, or whether any new programs had an impact.

Maj. Gen. Clement Coward, director of the Pentagon's sexual assault and prevention office, said Thursday that while some progress has been made, “we must do more to prevent this crime.”

While small, the increase is likely to only fuel the escalating debate about the Defense Department's failure to reduce the number of sexual assaults and harassment over the last decade or more. And it will do little to quash growing arguments that military prosecutions of the crimes must be taken away from commanders and turned over to civilians.

Defense Secretary Lloyd Austin’s first directive after he took office in January ordered senior leaders to look into their sexual assault prevention programs, and he later created an independent panel to study the matter. That panel has already recommended that decisions to prosecute service members for sexual assault be made by independent authorities, not commanders.

Such a change would be a major reversal of military practice and a shift long sought by congressional lawmakers. Austin has given service leaders 30 days to review the recommendation and come back to him with their input.

The latest report said that a bit more than two-thirds of the 3,358 cases that were resolved last year resulted in some type of discipline or other action taken against an attacker — roughly the same as the previous year. The punishments ranged from courts martial to administrative actions. According to the data, commanders concluded that 33 cases were unfounded, and there was insufficient evidence to prosecute in another 801 cases.r

The military's handling of sexual assaults and other violence has come under significant scrutiny in the aftermath of a series of violent crimes, including murders and suicides last year at Fort Hood, Texas. More than two dozen Fort Hood soldiers died in 2020, including Spc. Vanessa Guillén, who was killed by a fellow soldier.

Her death prompted an independent review, which found that military leaders were not adequately dealing with high rates of sexual assault and harassment at the post. The chairman of the independent review panel told members of Congress in a hearing earlier this year that the base leadership was focused on military readiness, and “completely and utterly neglected” the sexual assault prevention program. As a result, he said, lower-level unit commanders didn’t encourage service members to report assaults, and in many cases were shaming victims or were actually the perpetrators themselves.

Those conclusions have spurred military and defense leaders to pursue new solutions to the problem, which has stymied Pentagon officials for years.

“No member of the Army team should be subjected to sexual harassment, sexual assault, or associated retaliation,” said Army spokesman Lt. Col. Gabriel Ramirez., adding that the Army will continue to improve programs and encourage reporting.

The department releases a report every year on the number of sexual assaults in the military. Because sexual assault is a highly under-reported crime, the department also sends out an anonymous survey every two years to get a clearer picture of the problem. That survey was last done in 2018, and was scheduled for last year, but those plans were scrapped due to the pandemic.

The department has worked to encourage victims to come forward and implemented a wide range of programs to both deter assaults and protect and treat victims. Officials have also focused more time training leaders how to better reach out to their young troops.