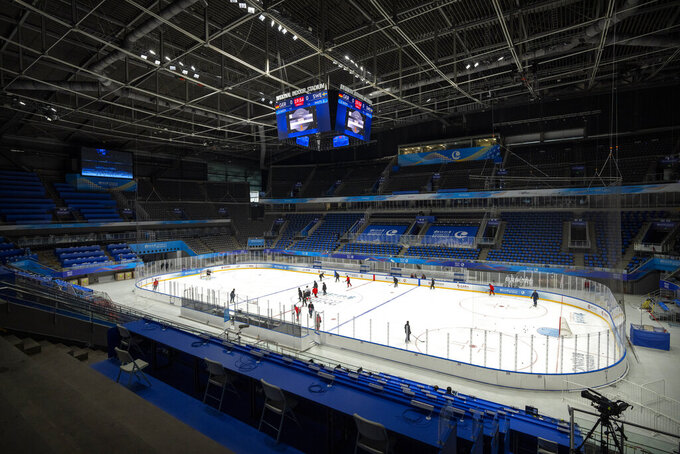 FILE - The China Ice Sports College hockey team practices on the ice during the Experience Beijing Ice Hockey Domestic Test Activity, a test event for the 2022 Beijing Winter Olympics, at the National Indoor Stadium in Beijing, Nov. 10, 2021. China's men's team is ranked 32nd in the world and is in a group with the United States and Canada, two of the medal favorites among the 12 teams going to the Winter Games in February. (AP Photo/Mark Schiefelbein, File)

International hockey officials are hoping to avoid a Humiliation On Ice when the Chinese men’s national team debuts at the Beijing Winter Olympics.

They begged the NHL to send players to the Games in China, but now they are worried that the home team might not even be able to score a goal.

The host nation automatically qualifies for every sport at the Olympics, but the Chinese men’s lineup — with a handful of naturalized Americans and Canadians — will face off against virtual NHL all-star teams from Canada and the United States in the first round. The International Ice Hockey Federation fears historic blowouts could hurt Olympic hockey’s image, especially after persuading the NHL to take a two-week break to allow the world’s top players to compete.

To figure out how it might all go down, the IIHF is holding an unusual test next week in Moscow, where players on the Chinese team will play against Russian professionals and attempt to be competitive. It’s not clear what might happen if the team plays as poorly as it has in recent games, which raised fears that it might not score even once on home ice in front of its own fans.

Ice hockey is not a popular sport in China, with no pro or significant amateur league. After China won the right to host the Games, an academy was set up to nurture young talent, and Chinese officials went around the world looking for players with Chinese ancestry — or who were willing to naturalize there — who could join the team.

But China’s men’s team is ranked 32nd in the world, and it is in a group with the U.S. and Canada, two of the medal favorites among the 12 teams going to the Winter Games in February. It has struggled against other competition.

That's why new IIHF president Luc Tardif scheduled the games in Moscow, where the Beijing-based Kontinental Hockey League team Kunlun Red Star — which has been used as something of a proxy for the Chinese national team to get experience in a professional league — will play against Russian opponents.

IIHF and Chinese hockey officials will be watching closely, in person and online, and hoping the team isn't on its way to being embarrassed against NHL competition in February.

It's unclear who will grade this test — or how. The IIHF said last week it will not remove China from the tournament — it does not have the unilateral authority to do that — and it would be up to the Chinese government to pull the plug.

That would be a humiliating step: A host country’s team has never been withdrawn from the modern-day Olympics for solely performance-related reasons, according to Olympic historian Bill Mallon.

There is good reason it is even being contemplated: Kunlun has lost 20 of its 26 KHL games this season and been outscored 96-57 in the process. Kunlun has played in the mostly Russian league since 2016.

Tardif said there are no such concerns about China’s women’s team, which is ranked 20th and in an Olympic group with less daunting competition.

The disappointing performance by the Chinese men's team so far is not for lack of effort. The Chinese Ice Hockey Association failed in its attempt to develop a homegrown roster, so the team's top players are North American — some with family ties to the country and others who have been naturalized after joining Kunlun and earning international approval to play for China.

Leading scorers Spencer Foo and Brandon Yip and top defenseman Ryan Sproul are Canadian and starting goaltender Jeremy Smith is American, though there is still some uncertainty about who will go to Beijing. The IIHF would not confirm which players on Kunlun’s roster were eligible.

Stocking Olympic rosters with international players is not uncommon, certainly not since the host country started getting an automatic berth in the hockey tournament in 2006. Italy that year had nine Canadians and two Americans, and South Korea in 2018 had six Canadians and one American. Neither team won a game.

Yip, by far the most accomplished player for China with 174 games of NHL experience, hopes playing together for several years and employing a tight defensive scheme can help his team hang with Canada, the U.S. and Germany in a difficult Olympic group.

“Obviously when you look at our teams on paper, it’s a big discrepancy," said Yip, a 36-year-old from British Columbia who has played for Kunlun since 2017. “We obviously know what we’re up against. They’re the best players in the world, so we’ve got a big task in front of us.”

How big a task?

Longmou Li, a longtime Chinese broadcaster who is VP of communications for Kunlun, figures the U.S. and Canada will shut out China, maybe 8-0 or 10-0, and added the focus is on the third game against Germany. Asked what would be considered success, Li said: “Score one goal and better performance. Not a disaster.”

China has endured painful sporting losses before, namely in soccer when it did not qualify for the 2010 World Cup and sacked its manager after going winless on home soil at the 2008 Olympics. Susan Brownell, a professor at the University of Missouri-St. Louis and expert on Chinese sports, believes a poor result this time could cause an inspection of hockey from the head government level.

“If I was a hockey administrator, I’d be shaking in my boots," said Brownell, who considers the failure of China's hockey academy program a big reason for the current conundrum. “The criticism really is that you invest all this money and you can’t produce results."

Much like in other sports, China brought in international coaches to help: Stanley Cup winner Mike Keenan was fired after just 36 games behind the bench with Kunlun in 2017, and the team has gone through Bobby Carpenter, Curt Fraser and Alexei Kovalev before landing on Italian-Canadian Ivano Zanatta for the Olympic job.

Li Li Ji, a Chinese national and professor of kinesiology who brings Chinese athletes and coaches to study at the University of Minnesota, said money is usually not an issue for China in building Olympic teams, but time was not on its side.

Li pointed out that it took Switzerland decades to reach the top level of international hockey, and China only put efforts into high gear after being awarded the 2022 Olympics in the summer of 2015.

The result could be similar to men's basketball, in which China lost 108–57 in the ‘88 Games to a U.S. team made up of college all-stars. Still, it sparked the nation’s appreciation of that sport's best and the NBA-stacked Dream Team steamrolled the competition four years later while the world watched in admiration.

“It’s going to be six dream teams — hockey teams — that play in Olympics in front of China fans,” Li said.

Still, there could be unwelcome optics if China gets blown out of its sparkling arena by Canada and the U.S. while relations between it and those nations are chilly. And there's the possible blowback of home fans taking issue with a Chinese team full of foreigners.

Brownell, an American who represented Beijing University in collegiate track and field in the 1980s, said Chinese people will take it as an honor if foreigners perform well. If they don't, it could become a source of parody.

As one of those players who chose to play for China, Yip is trying to see the big picture. Beyond a few anticipated losses in February, he wants to set the stage for a brighter future.

“If I’m sitting on the couch 20 years from now and I flip on the TV and you see a Chinese national player getting drafted in the first round or the Chinese men’s hockey team in the Olympics again, and they interview one of those players: ‘Why did you get into hockey?’ And they said, ‘I watched the Chinese national team in Beijing in 2022 and that inspired me' — that would be really what success is determined by this whole experience,” Yip said.