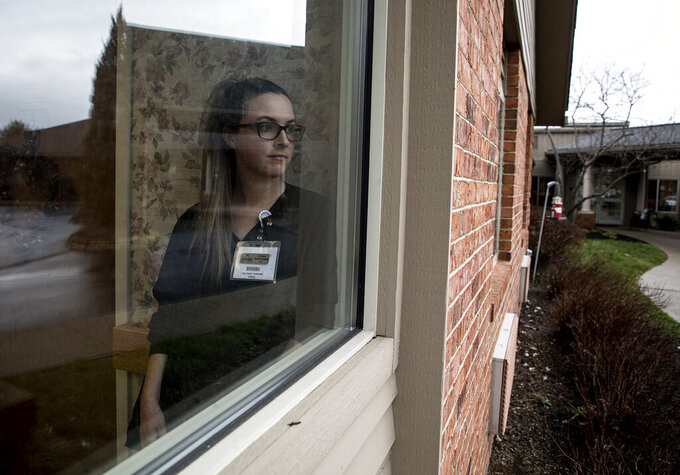 In this Tuesday, March 17, 2020 photo, nurse Alisha Disbennett poses for a photo at a window inside The Inn at Chapel Grove, in Heath, Ohio. Disbennett, along with her fellow staff, have all decided to go on lockdown with the residents, essentially moving into the residence. They made this decision to keep from inadvertently bring the coronavirus into the building and infecting residents who are the most vulnerable population to this virus. Disbennett has two children who are remaining at home in the care of their father. (Jessica Phelps/The Advocate via AP)

COLUMBUS, Ohio (AP) — Gov. Mike DeWine announced the coronavirus-related death of a state prison guard, while the number of prison employees with COVID-19 jumped to 48, along with 17 inmates. DeWine also urged institutions with surgical masks not to throw them away because a new sanitizing process can provide up to 20 reuses.

A look at coronavirus-related developments in Ohio on Wednesday:

Dawson had worked since 1996 at Marion, where the prison system's first positive case was reported this month. He had some underlying health conditions, the governor said.

The governor said 48 employees and 17 inmates have now tested positive at seven different prisons. The process is underway for a limited release of just over 200 Ohio prisoners, including pregnant inmates or women with children with them behind bars, inmates over 60, and prisoners eligible for early release because their sentences are nearly done.

No violent or sex offenders would be released, nor would inmates with poor prison records or domestic violence convictions, or those who were previously imprisoned. Ohio houses about 49,000 inmates.

DeWine urged institutions with surgical masks not to throw them away, but to arrange for them to be sanitized by Battelle, a private research company in Columbus that has developed a technology allowing masks to be reused up to 20 times.

The Ohio Hospital Association released guidelines for how hospitals can allocate scarce resources, including ways to implement a triage group to determine who should receive resources when they're not available for all patients.

In central Ohio, 44 staff members agreed to live in two assisted-living facilities, The Inn at Chapel Grove in Heath and The Inn at SharonBrooke in Newark, to reduce the risk of exposure to residents, The Advocate reported.

“I never thought in my whole nursing career that this would even happen, but I came to realize that in my entire nursing career, this is the time that they’re going to need me the most,” nurse Alisha Disbennett told the newspaper.

More than 5,100 people in Ohio have tested positive for the virus and 193 have died, with nearly 1,500 hospitalizations as of Wednesday, according to the state health department. Health Director Dr. Amy Acton is now predicting about 1,600 cases a day at the epidemic's anticipated peak later this month. The state has now tested more than 53,000 people.

Mahoning County leads the state with 28 deaths, followed by much larger Cuyahoga County with 23. Men continue to make up 66% of deaths, compared with 34% of women.

DeWine asked the state insurance fund for injured workers to rebate $1.6 billion to employers to ease the impact of the economic shutdown.

Following their mid-March closures, the state's casinos and racinos reported a $112 million revenue drop in March compared with one year ago, a 61% drop-off, according to the lottery and casino control commissions.

DeWine said he continues to receive questions about churches ignoring Acton's stay-at-home order. The Republican governor said he’s not going to violate people’s First Amendment rights by banning worship, but urged churches not to gather in-person, saying he’s not aware of any religion that supports putting others in danger. “We just ask everyone to love your neighbor," DeWine said.

The city of Blue Ash in suburban Cincinnati joined a long list of communities canceling events into mid-June, including the city's Memorial Day parade and a children's theater production.