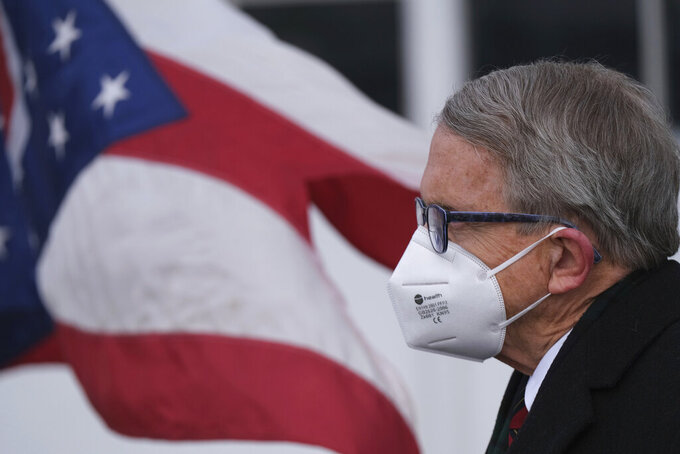 Ohio Gov. Mike DeWine looks on during a press conference Wednesday, Nov. 18, at Toledo Express Airport in Swanton, Ohio. On Tuesday DeWine announced a three-week 10 p.m. to 5 a.m. general curfew, with multiple exceptions, meant to slow the spread of the coronavirus as cases stay at near-record high levels. (J.D. Pooley/Sentinel-Tribune via AP)

The governor's reward? A suggestion by the president that another Republican should challenge him in Ohio's 2022 election.

Trump's warning came after DeWine said it was time to realize Joe Biden had won the presidential race. That was just the start of a rough few days last week for the Ohio governor, who is dealing with a state he says “is on fire” with skyrocketing coronavirus cases, and now finds himself fending off questions about his political future.

DeWine is feeling the heat mostly from within his party. Statehouse Republicans pushed forward a series of bills last week that would limit his authority to issue orders in response to the pandemic, and they sent a letter criticizing him for telling businesses to act as “mask police.”

On top of that, a group of anti-abortion organizations announced they no longer had confidence in DeWine because of his choices to lead the state's health department. It was another surprising turn against a governor who last year signed one of the most stringent abortion restrictions in the nation.

GOP dissatisfaction with the governor is leading to plenty of talk about who might run in a Republican primary against DeWine, who has been elected to almost every position in Ohio during a 40-year career and could rightly be considered the state's most successful politician in decades.

One name being brought up is U.S. Rep. Jim Jordan, a hard-right conservative who is one of Trump's biggest allies in Congress and has the name recognition and fundraising capability needed for a statewide run.

Jordan hasn't said whether he has any interest in running for governor, but several times recently he has poked fun on Twitter at DeWine's mask and curfew orders.

Former Republican U.S. Rep. Jim Renacci, who ran a failed U.S. Senate campaign two years ago, is thought to be considering a run and at the same time has been unleashing a string of tweets criticizing DeWine's handling of the pandemic.

DeWine, 73, said this past week he's “not spending much time thinking about politics at this point. We have a pandemic to deal with.”

Ohio GOP strategist Terry Casey said it’s likely that a Republican will challenge DeWine, but “the question is whether anybody with name ID and money, who knows who to run a state campaign, will actually file.”

Polling still shows DeWine has strong and broad support despite the frustration and unhappiness stemming from the pandemic, Casey said.

Early during the coronavirus outbreak, DeWine won praise for his aggressive steps to slow the spread, but since then he has encountered criticism from those who think he went too far with business shutdowns and believe he backed down from protecting the public.

“A lot of people around here enjoy their liberties and feel he's infringing on them in a big way,” said Richard Delzeith, the GOP chair in rural Mercer County, where DeWine won 80% of the vote two years ago. “People have lost their businesses to the shutdown. They will definitely remember this."

“People tell me they will never vote for DeWine ever again,” he said. “That’s pretty strong wording.”

The party's leaders in a handful of other rural counties said it's too early to know whether the frustration out there now will last.

Lacie Sims, who owns the Village Family Restaurant in Waynesville, a village in southwestern Ohio, said DeWine “doesn’t have many supporters here."

She voted for him in 2018 but soured on him after he shut down indoor dining last winter before many counties, including hers, had any confirmed cases. Her restaurant has lost $250,000 since then, she said.

Sims, who wanted it known that she takes the virus seriously, said she would welcome a Republican primary for governor in 2022.

“I would be very hard pressed not to support someone who believes in small government,” Sims said. “If that candidate is out there, I hope they run. They’ll have my support."

The revolt among conservatives stems from Trump's outsized influence over the party, which has displaced the power of more traditional Republicans, said La Trice Washington, an Otterbein University political science professor.

The question for DeWine is whether voters in rural Ohio who overwhelmingly support Trump and remain skeptical of the coronavirus and DeWine’s protective measures will still feel that way in less than 18 months when Ohio holds its primary election.

Perhaps DeWine can recover, Washington said, “but I don’t think Donald Trump will be anything less than relentless, and he’ll be watching.”