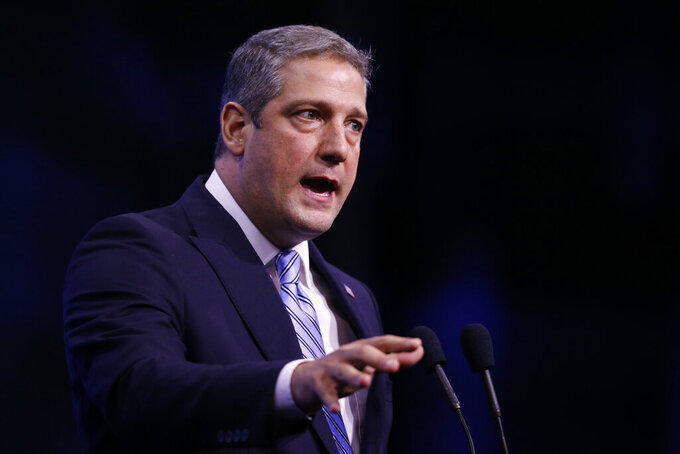 FILE - In this Sept. 7, 2019, file photo, Democratic presidential candidate Rep. Tim Ryan, D-Ohio, speaks during the New Hampshire state Democratic Party convention in Manchester, N.H. An open Senate seat in Ohio has set off a round of jockeying among ambitious Democrats and a spirited debate over who is best poised to lead a party comeback in a one-time battleground that has been trending Republican. (AP Photo/Robert F. Bukaty, File)

COLUMBUS, Ohio (AP) — An open Senate seat in Ohio has set off a round of jockeying among ambitious Democrats and a spirited debate over who is best poised to lead a party comeback in a one-time battleground that has been trending Republican.

At the core of the fight, triggered by the unexpected retirement of Sen. Rob Portman, is whether the party should prioritize gender or racial diversity in its nominee or again align behind a white man with the hope of winning back the white, working-class voters who have been leaving the party for years.

“As the Democratic Party, we have done the same thing over and over and over again, which is to run white men, and we haven’t been successful,” said Dayton Mayor Nan Whaley, among the Democrats considering jumping in the race. “I think we have to offer something different and I think that’s important; whether that’s people of color on the ticket in a meaningful way, and women, you know we are the base of the party, and we shouldn’t be an afterthought.”

The fight in Ohio is a replay of the one that consumed Democrats' presidential primary last year and suggests the ultimate victory of a white man — now President Joe Biden — did nothing to settle it. Biden lost Ohio by 8 percentage points.

Now some influential Democrats are urging Dr. Amy Acton, a white, former state health director who emerged to prominence during the pandemic, to jump in for what would be her first bid for public office. Meanwhile, veteran Congressman Tim Ryan, a white man who represents Ohio's blue-collar Steel Valley, also has said he's strongly considering a bid, encouraged by Democrats who tout his appeal to working-class voters.

While Acton and Ryan are believed to be the furthest along in their deliberations, several politicians who are Black are also eyeing the seat. They include Franklin County Commissioner Kevin Boyce, a former state treasurer; U.S. Rep. Joyce Beatty, a five-term congresswoman from Columbus; and Ohio House Democratic Leader Emilia Sykes. Former Columbus Mayor Michael Coleman dropped out of the running Wednesday.

“Ohio does need to shake it up and this race will dictate where we go in the future,” said state Rep. Thomas West, chairman of the Ohio Legislative Black Caucus. The group is working to recruit a Black candidate for the Senate seat, he said.

Democrats have traditionally won the state on the strength of their support with voters in Ohio's many cities, including Cleveland, Columbus and Cincinnati, all places with large Black populations. That base was augmented with support from a stretch of counties along the Ohio River. But Republicans have been cutting into that support for years, leading to two victories for Republican Donald Trump and a shutout for Democrats in statewide executive offices since 2006.

That's left Democrats looking for a new formula — one that might boost turnout in the cities and build off recent momentum with suburban voters and women.

Antoinette Wilson, a Democratic consultant and recent contender for state Democratic chair, said the party began working to recruit Acton even before Portman announced his decision last week not to run for reelection. Early in the virus outbreak, Acton was a regular on television screens across the state, spawned an Amy Acton Fan Club with its own yard signs, inspired a bobblehead and had young girls dressing like her.

But she also sparked intense pushback over the restrictive health orders she was imposing on the state, at Republican Gov. Mike DeWine's request, which included anti-Semitic swipes and armed protests at her suburban home. She left the administration in June.

As a political newcomer, it's not clear how the physician and former college professor would do on the rough-and-tumble campaign trail, Wilson noted.

“The key question is always about electability,” Wilson said. “Does Amy Acton have great name ID? Yeah. Do people know her name? Of course. But that versus a political candidate is a different dynamic."

Ryan, 47, is coming off a tenth win in his once-solidly Democratic district. But he received a smaller percentage of the vote — 52.5% — than in any of his previous elections, a reflection in part of the GOP's steady inroads with voters in the northeast part of the state. Notably, Ryan outperformed Biden, who touts his own working-class following, in the district that includes the General Motors plant in Lordstown.

“To me that would be the big element of his candidacy,” said Pickrell, who ran Biden’s Ohio campaign last year. “He should be able to tap into the sort of suburban, exurban areas where Trump didn’t do as well, but then undercut the Republican gains made in areas that had traditionally been Democratic, like the Mahoning Valley and Appalachia.”

Some Democrats liken Ryan to Sen. Sherrod Brown, an outspoken economic populist who won a commanding reelection victory in 2018. But any similarity has never been tested, as Ryan has explored but never pursued a statewide race.

Still, Ryan got a boost Saturday when Hillary Clinton, the party’s 2016 presidential nominee, declared on Twitter that she was “all in” for a Ryan Senate candidacy.

Meanwhile, the Pulitzer Prize-winning columnist and author Connie Schultz, who is married to Brown, has tweeted about Acton’s potential candidacy: “Imagine Dr. Amy Acton as Ohio’s next U.S. senator. I sure can.”

The party's debate comes just as a new group of younger, more diverse leaders takes over the state party, led by the party's first female chair and the first Black executive director.

For some Ohio Democrats the cautionary tale is 2018, when a group of female gubernatorial candidates all ceded their ambitions to former Obama administration consumer chief Richard Cordray, who lost the race.

“You look at all these women who ran for the Democratic nominee against white men and the white men got the nomination and then lost the general election,” said Democratic consultant Sandy Theis. “Ohio is littered with that history. Okay, well, why don’t we learn from the past and why don’t we give the women a try?”

Theis said her favorite picks for the Senate bid are Acton and Beatty, 70, whom Theis said showed grit when she was pepper sprayed during a Black Lives Matter rally this summer while protecting another much younger demonstrator from police.

Another prospect is Sykes, 35, who holds a seat that's been in her powerful Akron political family since her father won it in 1983. Vernon Sykes, now a state senator, was succeeded by his wife, Barbara, who also made an unsuccessful run for state auditor in 2006.

Boyce, 49, has been a commissioner in Ohio's largest county since 2016, after holding a series of previous offices, including city councilman and state representative. He was appointed state treasurer by Strickland in 2008, becoming the first Black Democrat ever to hold statewide, non-judicial office. Boyce lost a bid to be reseated two years later.