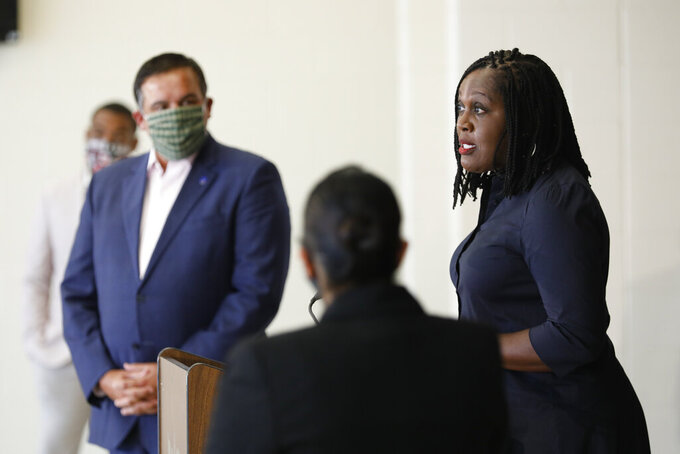 COLUMBUS, Ohio (AP) — Day cares can return to normal staffing ratios, but county fairs will be reduced to junior fairs featuring livestock competitions for children and teens, without the usual rides, games and grandstand events, Gov. Mike DeWine announced Tuesday in his latest updates about the impact of the coronavirus in Ohio.

Despite the best efforts of fair officials so far, it has become obvious that fairs can't go on normally because of the pandemic this year, the Republican governor said. The change, which the governor called a “difficult decision,” takes effect Friday.

The announcement limits fairs to livestock competitions and 4H and other events for children and teens. It also allows harness racing without spectators.

Day cares can raise their ratio limits, or apply for subsidies to maintain their current, lower ratios, the governor said. Providers must still comply with health requirements such as face masks, temperature checks, hand-washing and frequent cleaning, DeWine said.

He said the state had recorded 306 coronavirus cases among child care professionals in day cares and 106 among children in those centers since the pandemic began. One in four cases came directly from the centers, the governor said.

Expanding day care capacity was the better alternative “to children in unsafe conditions as people go back to work,” DeWine said.

He expressed skepticism at Tuesday's announcement by Ohio State University that, if football games are played in the fall, it would likely allow only 20% of normal capacity inside Ohio Stadium, which normally seats more than 100,000.

He urged people to limit the size of gatherings, which he said has led to outbreaks among family members, and to be vigilant about mask-wearing, especially in counties without high numbers of cases.

“We are at a critical stage in this virus," the governor said. "We don’t know which way it’s going to go.”

Also Tuesday, the superintendent of Columbus City Schools, Ohio’s largest district, announced all grades will be taught virtually at least through October.

Franklin County, home to Columbus, has some of the highest numbers of positive COVID-19 tests in Ohio. Even before DeWine issued his statewide mask order, the county was under its own mandate for mask-wearing in public.

Under the plan, school will begin Sept. 8 — at least two weeks later than normal — and students will learn virtually at least through the first quarter, ending Oct. 27. Students can take online classes through their school or enroll in a Columbus-run digital academy.

The city would have to see at least four weeks of declining coronavirus cases before a return to school could be recommended, said Dr. Mysheika Roberts, the city's public health commissioner.

Amiri is a corps member for the Associated Press/Report for America Statehouse News Initiative. Report for America is a nonprofit national service program that places journalists in local newsrooms to report on undercovered issues.