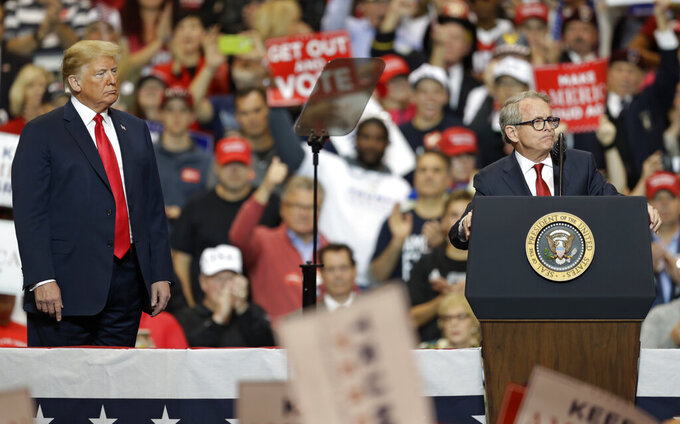 FILE-This Monday, Nov. 5, 2018 file photo shows President Donald Trump listening as Ohio gubernatorial candidate Mike DeWine speaks at a campaign rally, in Cleveland. DeWine on Monday Nov. 16, 2020 found himself on the receiving end of criticism by President Donald Trump and praise by President-Elect Joe Biden with a focus on the 2022 elections. Trump on Monday appeared to suggest in a tweet that DeWine needed a primary challenger. (AP Photo/Tony Dejak, File)

COLUMBUS, Ohio (AP) — Republican Ohio Gov. Mike DeWine found himself on the receiving end of criticism by President Donald Trump and praise by President-Elect Joe Biden on Monday, with the result being an early focus on the 2022 elections.

It started when Trump appeared to suggest in a tweet that DeWine needed a primary challenger. The president's remark came a day after DeWine said on CNN that Trump should begin a transition to Biden, repeating a statement he put out last week that set him apart from many other Republican officeholders.

“Who will be running for Governor of the Great State of Ohio? Will be hotly contested!,” the president tweeted.

DeWine said Sunday that Trump has every right to go into court with evidence, but added: “It's clear that, certainly based on what we know now, that Joe Biden is the president-elect."

Speculation has swirled that DeWine might attract a primary challenger from the right because of dissatisfaction among conservative Republican lawmakers over his handling of the coronavirus, including a statewide mask mandate, a 10 p.m. curfew for bars and restaurants, and strict limits on gatherings. Among names mentioned have been former U.S. Rep. Jim Renacci, a former Wadsworth mayor who ran briefly for governor in 2018, or U.S. Rep. Jim Jordan, a bulldog for Trump's agenda in Congress.

Later Monday, Biden gave a shout-out to DeWine as a leader among conservative Republicans for his proactive efforts to slow the spread of the coronavirus.

DeWine said in a statement Monday he has always had a “great working relationship” with the president.

“I am proud to have served as President Trump’s Campaign Co-Chairman in Ohio where we won by the largest margin of any swing state in the country," the statement said. “And I intend to run a winning campaign for governor in 2022.”