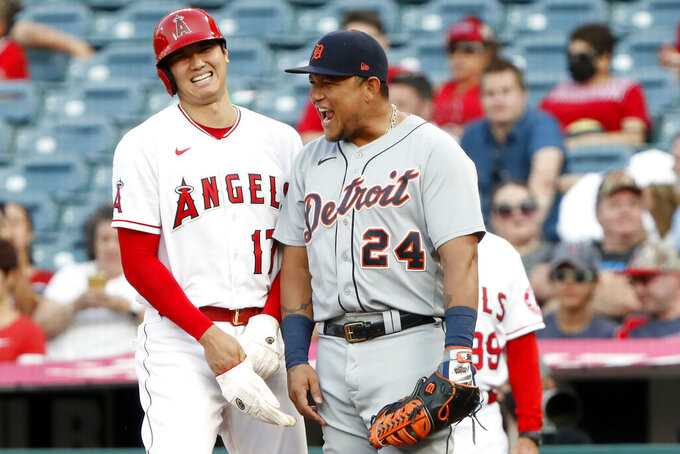 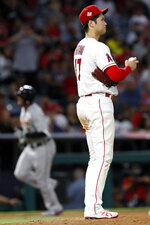 ANAHEIM, Calif. (AP) — Shohei Ohtani hadn't pitched in front of a full, rowdy crowd at Angel Stadium since he was a major league rookie three years ago, and he had missed the feeling.

With 30,709 fans cheering them on, Ohtani and the Angels rode that wave of energy to yet another win.

Ohtani (3-1) also drew two walks at the plate for the Angels, who celebrated the Big A's return to full capacity with their 15th win in 23 games. The Halos have improved markedly over the past month even without Mike Trout, and Ohtani's two-way performances are leading the way.

“Definitely felt good pitching in front of a lot of people,” Ohtani said through his translator. “Definitely better than no fans. It gives me energy, gives me confidence. Only good things come out of the fans being there.”

Luis Rengifo and David Fletcher drove in early runs for Los Angeles, and Ward highlighted a five-run seventh by drilling a 418-foot shot to center field for his seventh homer of the season. The Angels stumbled home after a three-game sweep in Oakland interrupted their momentum this week, but Ohtani already sees it returning.

“If we can play the ball we were playing during the winning streak, we can do a lot of good things, so today was a good start,” he said.

Ohtani was on again in his 10th mound start of the season, which matches his total during his AL Rookie of the Year campaign. The Japanese star struck out five and issued just one walk to the Tigers, who didn’t get a runner to third base until Schoop hit his 12th homer in the sixth.

“I thought Shohei illustrated all of his talents today,” said Angels manager Joe Maddon, who pulled his starter after 78 pitches. “He shows you a pretty complete game of baseball. ... I thought that was a pretty significant day’s work for him. It’s still June, and I want this guy to have one of the greatest seasons ever, so I don’t want to jeopardize his overall health.”

Jonathan Schoop homered off Ohtani in the sixth for the Tigers, whose three-game winning streak ended after they rallied too late against the Angels' struggling bullpen.

“He walked Ohtani, but I think we should walk Ohtani a lot, to be honest,” Hinch said. “With two runs (allowed while pitching) against Ohtani, it’s going to be tough. But the work we did against Ohtani, we got him out maybe an inning earlier than they would have wanted, and then we got to work against their bullpen.”

Los Angeles had a 7-1 lead heading into the eighth, but reliever Mike Mayers allowed four straight Tigers to reach base and didn't get an out while giving up three runs.

Raisel Iglesias got the final six outs for his 12th save, but he gave up two run-scoring hits in the eighth and allowed another run on a wild pitch in the ninth.

The 23-year-old Manning was the ninth overall pick in the 2016 draft out of high school in Sacramento, and the son of a former NBA player became one of MLB's top pitching prospects.

His development stalled last season due to the coronavirus pandemic and a forearm strain, and Manning hadn't been particularly impressive at Triple-A Toledo this season with an 8.07 ERA and 11 homers allowed in his seven starts. With a rash of pitching injuries and a desire to see what Manning can do at the highest level, the Tigers promoted him anyway.

“I was able to put away some of the emotions part of it and not make it bigger than it was,” Manning said. “I just felt comfortable, and as the game went on, it kept building.”

Manning was largely sharp against the Angels, issuing two walks — both to Ohtani — and striking out three. He allowed two runs in the second largely thanks to his teammates' poor defense.

Manning finished strong in front of dozens of friends and family members — “too many to count,” he said.

“I’m so happy I was able to debut in my home state," he added.

Tigers: LHP Matthew Boyd, who left his last start with an arm injury, will meet with Dr. Neal ElAttrache while Detroit is on the West Coast, Hinch said.

Angels: 3B Anthony Rendon (triceps) was out of the lineup for the third consecutive game, clearing the way for Rengifo to get a start.