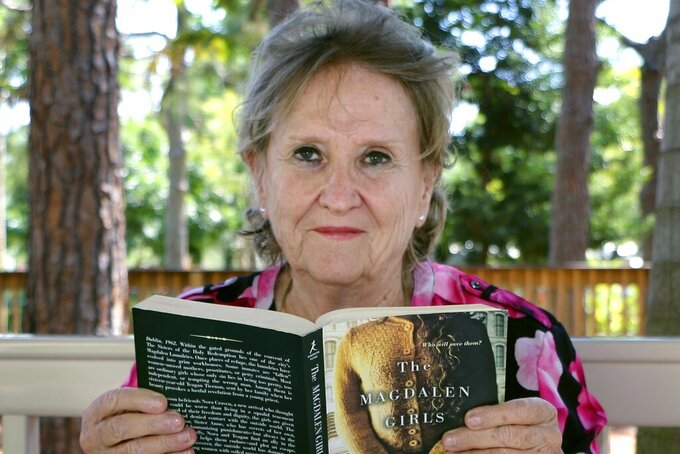 In this March 27, 2020, photo provided by John Knox Village, resident Jeanne Jordan poses for a photo at the retirement community in Pompano Beach, Fla. The retired newspaper editor quickly created a virtual book club when her monthly community gathering was canceled due to the coronavirus outbreak. (John Knox Village via AP)

PORTLAND, Maine (AP) — This isn’t the way Betsy Steen and her husband wanted to spend their golden years: Hunkered down at home, living with fear and isolation.

Steen, 76, and her husband David, 75, both take immuno-suppressant medications, placing them at high risk if they contract the coronavirus. They try to keep positive, but it’s hard to escape the flood of bad news.

“It’s just surreal,” the retired teacher said from her Bowdoinham home. “It’s kind of like a dream. Every once in a while, you wake up and say that’s real.”

States with older populations carry special worries during the deadly pandemic: Loneliness takes an emotional and physical toll on fragile residents. Delivering food and medicine to the homes of isolated shut-ins presents an enormous challenge. Rural hospitals, meanwhile, worry about overwhelmed emergency rooms if the virus continues to spread.

In Maine, behind the idyllic scenes of lighthouses and lobster boats, all of those problems are intensified with the nation’s oldest and most rural population, according to the U.S. Census Bureau.

“Here’s the thing: You have a lot of folks who are isolated, who cannot get out, who don’t drive. How are they connected? Who’s checking in on them?” said Lori Parham, AARP’s state director.

Even before the pandemic, Maine's challenging demographics were exacerbated by a nursing shortage and health care consolidation, which left fewer medical services in New England’s poorest and whitest state. The same backdrop crosses economic and racial lines in large cities such as Chicago, New York, New Orleans and Milwaukee whose black populations disproportionately suffer from poverty and reduced health care access, making them vulnerable to the virus.

All told, Maine has only 300 intensive care unit beds and about 330 conventional hospital ventilators for a population that includes about 276,000 residents 65 or older. So far, Maine’s hospitalization rate for the coronavirus is a third higher than the national average, said Dr. Dora Anne Mills, chief health improvement officer at MaineHealth.

“I hope people are staying home because it’s our only hope. We’re doing everything we can. But holy cow, there are limits,” said Steven Michaud of the Maine Hospital Association, who acknowledged he’s “terrified” by some of the things he has learned about the virus.

The Maine National Guard is working to create additional health care capacity. As of Sunday, more than 600 people had tested positive and nearly 20 people had died from the virus in Maine.

Around the world, seniors have been hard-hit by COVID-19, the illness caused by the coronavirus. For most people, the new virus causes mild or moderate symptoms, such as fever and cough that clear up in two to three weeks. For some, especially older adults and those with existing health problems, it can cause more severe illness, including pneumonia and death.

Many seniors are more worried about isolation and loneliness than the virus as they face the prospect of being sequestered for weeks.

Gayle Sprague, who lives alone in Machias, 90 miles from the closest hospital with an intensive care unit, said she’s frustrated because she can’t see her 3-month-old great-grandson.

Ditto for Jerry Horn, who lives alone with no cellphone, no computer and no television in Sanford. Now there’s no knitting group, no YMCA, no square dancing, no library — the things she did for fun, she said.

In Florida, retired newspaper editor Jeanne Jordan quickly created a virtual book club when her monthly gathering was canceled at her retirement community. The club serves as an escape from the realities of the pandemic.

“You get outside of yourself by talking about books,” said Jordan, 75, of Pompano Beach. “If we get outside ourselves, we can still access that beauty and imagination and normality.”

In Bowdoinham, population 2,900, Betsy Steen is reading books, sewing protective masks, providing video lessons to her grandchildren, sending out weekly emails about the town’s history — and trying not to worry. “Fear is not useful,” she said. “What will happen, will happen.”

Doctors know that isolation and disruption can make people stressed, making the elderly even more vulnerable.

“Isolation leads to loneliness. Loneliness leads to depression. It absolutely puts them a greater risk,” said Ellen Flaherty, director of the Dartmouth University’s Centers for Aging in Hanover, New Hampshire.

Chicago learned what can happen when no one checks on the elderly in 1995 when a heat wave killed over 700 people — many of them senior citizens living on their own.

“People died because they did not have the essential social contact they needed to stay safe,” said Eric Klinenberg, a sociology professor and director of the Institute for Public Knowledge at New York University, and the author of “Heat Wave: A Social Autopsy of Disaster in Chicago.”

In Maine, seniors are scattered across a state with vast stretches of sparsely populated land. About one in three Mainers are on welfare, and rural residents are more likely to live in poverty, have limited health care, and slower internet access, officials say.

Others are in assisted living communities, or nursing homes, which carry their own risks because the virus can spread quickly in close quarters.

Chicago, for its part, is doing a better job of keeping tabs on seniors. The Department of Family & Support Services, for example, is armed with contact information on the 40,000 people who use the community centers that have been closed because of the virus. Volunteers spend their days reaching out to everyone on that long list.

“We are doing robo calls to them and we are making what we call reassurance calls to check in on them to see if they’re OK. We are calling them multiple times a week,” said spokeswoman Quenjana Adams-Olayeni.

Society will be judged by how it treats its seniors during this crisis, said Dr. Jabbar Fazeli, a leading geriatrics physician in Maine.

“People’s character is tested when we come against (something like this),” Fazeli said. “We fail when we say, ‘It affects only older people, so let’s not worry about it.’”