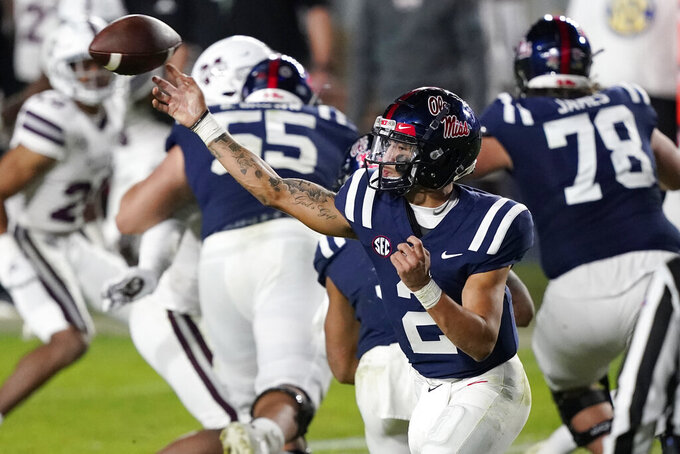 But Kiffin chose a path that returned him to the head coaching ranks, first at Florida Atlantic and then this year at Ole Miss.

Now they’re preparing to face off for the first time in an actual game -- an end-of-season matchup Saturday at LSU's Death Valley.

“In practice we used to go after it all the time,” Orgeron recalled. “We were very competitive, and I loved it. But, yeah, it will be the first time” to face one another as head coaches on opposite sidelines.

“Me and him recruited a lot of great players together," Orgeron said. "We have a lasting bond.”

“I learned a lot from him,” Kiffin recalled. “Just watched how he worked.”

The Tigers seemed to be going in the wrong direction after consecutive losses to No. 5 Texas A&M and No. 1 Alabama – the latter by a score of 55-17.

But Orgeron rallied a Tigers squad decimated by injuries and opt-outs, and they stunningly upset then-No. 6 Florida in the Swamp last weekend.

“I think we’re all going to learn from having a week like we had last week where some teams or some men would have crumbled," Orgeron said. "We decided to get stronger and fight.”

Mississippi (4-4) has steadily looked stronger under Kiffin, who has the Rebels on a three-game winning streak.

Ole Miss now has a chance to finish the regular season with a winning record against an all-SEC schedule, which Kiffin said, “Would be pretty exciting in our first year to do -- especially knowing that we let a couple of them slip away that we should’ve won.”

Mississippi has not played since Thanksgiving weekend because of COVID-19 protocols that wiped out the Rebels’ game against Texas A&M, which had already been rescheduled once from earlier this season.

“We’re definitely going to have fresh legs; that part is good,” Kiffin continued, but also noted that he’s concerned about whether some key players will have enough practice before the game.

“It has taken a little time getting back into it,” he said.

LSU freshman Max Johnson got his first start at quarterback last week and made a strong case for why he should start again over fellow freshman TJ Finley, who’d started four games after junior Myles Brennan injured his abdomen.

While Orgeron remains highly complimentary of Finley, he also didn’t downplay how pleased he was with Johnson’s debut as starter in the victory at Florida.

“We’re very impressed with Max’s leadership, his toughness, his ability to run the football, his ability to make decisions under pressure. And the biggest thing is no turnovers,” Orgeron said. “Think about this: You’re a true freshman, you go into the Swamp. You’re a 23-point underdog and you win. That tells you a lot about the young man.”

While Ole Miss still could go to a bowl, LSU already has announced a self-imposed postseason ban for this season in an effort to appease NCAA investigators probing recruiting violations from earlier this decade.

So Tigers players know they must win Saturday if they want to finish on a triumphant note.

Menawhile, Kiffin expects LSU’s victory in Florida to make them even tougher to play this week.

“I think that re-energized them,” Kiffin said. “It would’ve been a lot harder if you lose that game, you go back and are on whatever losing streak they would’ve been on. I’m sure that gave them a bunch of energy and they want to finish strong.”

While LSU’s defense has been solid in three of its past four games, the unit’s collapse against Alabama was reminiscent of bust-filled games earlier this season and begs the question of how the unit will hold up against an Ole Miss offense averaging 563 yards per game.

Led by quarterback Matt Corral and versatile running back Jerrion Ealy, the Rebel offense ranks first in the SEC and all other Power Five conferences, trailing only Kent State and UCF nationally.