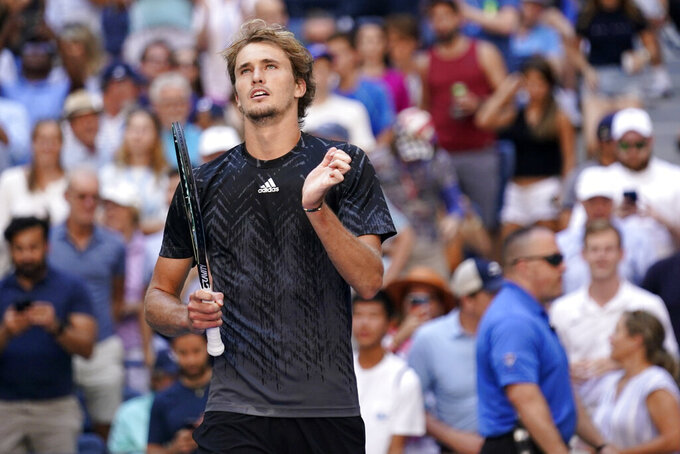 Alexander Zverev, of Germany, celebrates after winning his match against Jannik Sinner, of Italy, in the fourth round of the US Open tennis championships, Monday, Sept. 6, 2021, in New York. (AP Photo/Seth Wenig)

NEW YORK (AP) — Alexander Zverev and Belinda Bencic want a trophy in their hands to go with the gold medals they had around their necks.

The Tokyo Olympics tennis champions both moved into the quarterfinals of the U.S. Open on Monday, getting a step closer to their first Grand Slam titles.

Zverev beat Jannik Sinner 6-4, 6-4, 7-6 (7) for his 15th straight victory. The No. 4 seed from Germany started that run in Japan, carried it through a title in Cincinnati and then kept right on going at the U.S. Open, where he was the runner-up to Dominic Thiem last year.

Zverev said his gold medal is with him in New York. The 24-year-old, who has been accused by a former girlfriend of domestic abuse, joked in his on-court interview that he cuddles with the medal when he’s in bed because he doesn’t have a girlfriend.

He said keeping the medal with him is a way to remind himself of his success over the last month. He pointed to the confidence he's gained from it as a reason he pulled out a couple of close games late in the second set, then came from behind to take the tiebreaker.

“I think that’s maybe the last few months for me, right there,” he said.

Bencic also had her best result in a major at the U.S. Open, reaching the semifinals in 2019 in her last appearance. The 24-year-old from Switzerland is a victory away from getting back there after beating 2020 French Open champion Iga Swiatek 7-6 (12), 6-3.

“The set was so even, so I think in the tiebreak it’s always a little bit about luck,” Bencic said.

But luck doesn’t explain her results in New York, where she has reached the last eight in three of her six appearances. She was a quarterfinalist in 2014 in her debut.

Raducanu reached the fourth round and Wimbledon and has now gone a step further at the year's last Grand Slam tournament. She is the third qualifier in the professional era, which began in 1968, to reach the U.S. Open quarterfinals, joining Barbara Gerken in 1981 and Kaia Kanepi in 2017.

“Belinda is a great player who’s in great form, so I know I’m going to have to bring it on Wednesday,” Raducanu said.

Rogers beat No. 1 Ash Barty in the third round and jumped to a 2-0 lead Monday before Raducanu reeled off the next 11 games.

Zverev’s winning streak includes a victory over Novak Djokovic in the semifinals at the Olympics. He hit 17 aces Monday and will play South African Lloyd Harris, who eliminated No. 22-seeded American Reilly Opelka 6-7 (6), 6-4, 6-1, 6-3.

The top-ranked Djokovic was in action later Monday against 20-year-old American Jenson Brooksby in the same stage where he was eliminated at last year's U.S. Open.

It was in the fourth round that Djokovic was defaulted for accidentally hitting a line judge in the throat with a tennis ball after dropping a game in his match against Pablo Carreño Busta.