Olympic couple hopes to give speedskating a boost in Britain 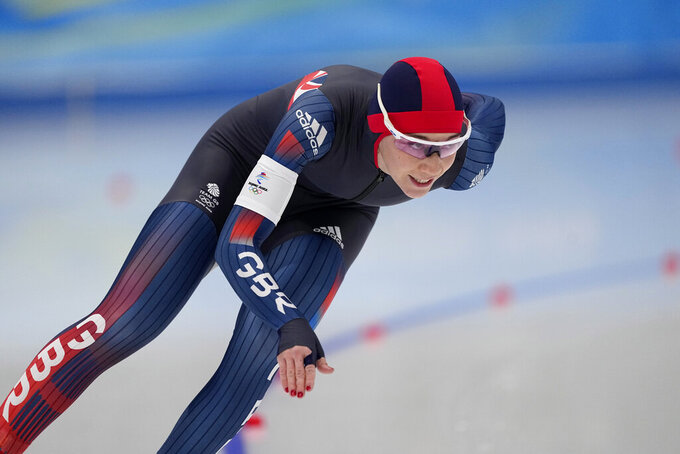 BEIJING (AP) — Ellia Smeding and Cornelius Kersten are realistic about their medal chances at the Olympic speedskating oval.

Frankly, that's not on their radar.

The British duo — who are partners on the ice and in life, not to mention their burgeoning coffee business — actually have bigger beans to roast in Beijing.

They want to raise the popularity of the sport they love so much in a country that barely knows it exists.

Smeding and Kersten have already made a bit of history for Britain just by earning spots at this year's Winter Games.

Kersten is the country's first male speedskater to compete at the Olympics since the 1992 Albertville Games.

“It means the world to me,” Kersten said. “At the start line there, I was just very emotional. It was like everything we worked for, everything is coming together now. This is the race. Time to go. To put long track back on the map again (in Britain), I'm really proud to do that. To go through this experience with Ellia makes it even more special.”

Kersten and Smeding live and train in the Netherlands, the hotbed of speedskating and pretty much a necessity since there's not a single oval in all of Britain.

While short track speedskating has a bit of a following in the country, the traditional version of the sport had faded into obscurity in recent decades.

With hardly anyone showing interest, speedskating is largely ignored — financially and otherwise — by the British Olympic committee, which prefers to put its resources into sports that actually have a shot at medals.

Smeding and Kersten know that medals are not a realistic expectation for themselves, but they hope their mere appearance in Beijing will give the sport a jolt.

“I don't know what the affect will be," Kersten said. “Maybe next year at long track, we’ll see more people pop up. I don't really know what we’ve achieved yet, but hopefully we’ve achieved something.”

The long-term goal is to spark enough interest to eventually get a 400-meter oval built in Britain.

“That's the biggest thing,” Smeding said. “If you don't have the facilities, it's really hard to grow a sport."

They both competed in the 1,500 meters to get their programs started in Beijing.

Smeding placed 27th out of 30 skaters, while her partner did a bit better on the men's side, beating out 10 other competitors to finish 19th.

“I really wanted to put down a good race, make the country proud and show what long track is," Smeding said.

She hopes to be a bit more calm after the thrill of her first Olympic race.

"It was quite overwhelming, to be honest,” Smeding said. “It's really cool to be able to call myself an Olympian now."

It was only natural for both of them to pursue speedskating.

Kersten was born in the Netherlands to a Dutch father and a British mother. The 27-year-old was a Dutch junior champion, but he decided to compete for Britain as he moved up the ladder.

The 23-year-old Smeding was born in England, also to a Dutch father and British mother. The family moved to the Netherlands when she was 8, giving her an up-close look at one of that nation's most popular sports.

Even though his roots are firmly rooted in the Netherlands, Kersten felt as British as any athlete on Team GB when he stepped to the line at the Ice Ribbon oval.

“It's so special to have the lion on there,” he said, rubbing the familiar logo on his uniform. “We've been standing in front of the mirror, dusting it off a bit. I'm really proud.”

The couple founded a coffee company — Brew'22, get it? — to help fund training and travel expenses. Their flavors include Trailblazer, Underdog, Powerhouse, Dreamcatcher and One of a Kind.

They brought plenty of single-cup filters to Beijing, making them quite popular in the Olympic bubble.

Maybe another good thing will come from their Olympic experience.