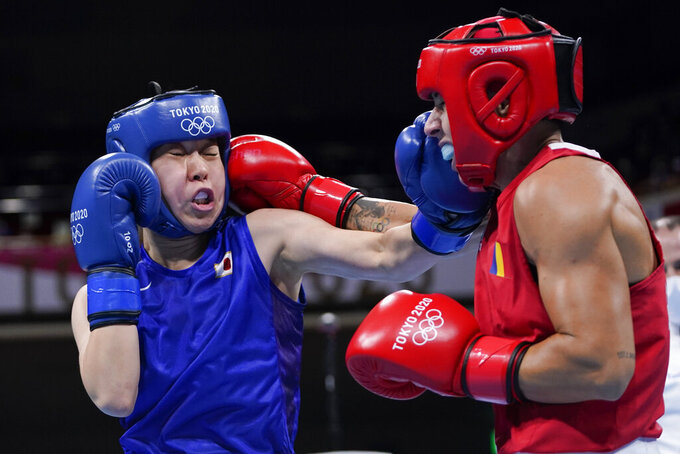 TOKYO (AP) — About 15 minutes after Nesthy Petecio clinched the Philippines' first-ever medal in Olympic women's boxing, Irma Testa laughed with joy when she achieved the same history for Italy.

“It was the result of 13 years of work for me," Irie said through a translator. “But this tournament is a very big moment for women's boxing in Japan and in the world. We have come a long way. I hope this helps our sport.”

Just nine years after the sport's debut in London, the biggest women’s boxing field in Olympic history is more talented and more exciting than ever before — and it's flattening all kinds of milestones in Tokyo.

Petecio, Testa and Irie made their bits of national history Wednesday by winning in the quarterfinals of the Olympic 57-kilogram featherweight division, which didn’t exist before this year. Tokyo features 100 women fighting in five weight classes, nearly tripling the 36 fighters who competed in just three classes in London and Rio.

Women's boxing has grown rapidly over the past decade, both at the amateur and professional levels. But the sport has reached another level of legitimacy and attention in Japan, and it's mostly because of the blossoming of the seeds planted in London.

Dozens of girls who watched the sport's debut on television from Britain in 2012 are all grown up now, and they arrived in Tokyo ready to fight.

Caroline Dubois was only 11 when Ireland’s Katie Taylor and Britain's Natasha Jonas fought each other in the quarterfinals of the London Games. Taylor went on to win gold, and Dubois was fascinated.

Dubois is now the loaded British team’s lightweight, and while she's pleased by the increased number of fighters, she knows the sport's overall rise in quality is more important — and more daunting.

“It’s mad how the level, the experience, the talent has all gone up,” Dubois said. “There’s so many talented people here with so many great styles. When Katie Taylor and Natasha were here, there were a few standout talents, like them and (two-time U.S. gold medalist) Claressa Shields. There were a few girls who were just above the rest. But the level has just gone up so much. Everything is even. Everybody is so talented.”

The increase to 100 boxers is important, but the additional weight classes are even bigger to the fighters. Professional boxing has 17 weight classes for men and usually 10 for women, but boxers who don’t weigh close to the broader limits set by the Olympic sport — eight for men and five for women in Tokyo — are at a disadvantage that only gets smaller when classes are added.

For instance, Testa fought at 60-kilogram lightweight in Rio de Janeiro, and she struggled against stronger opponents. Five years later, she could compete in a lighter weight class in Tokyo — and she promptly secured a medal.

“Featherweight is best for me,” Testa said. “Every opponent and girl is very strong, but I feel better with myself. It’s very different. I'm very grateful.”

Most of the women fighting in the new 69-kilogram welterweight class feel the same, including U.S. representative Oshae Jones. In London and Rio, the span between 60-kilogram lightweight and 75-kilogram middleweight was unbridgeable for many fighters.

“It's amazing to be the first welterweight, because in boxing, women still don't get the same rights and privileges as the men," Jones said. “With two more weight classes, I think we're getting neck and neck with the men. I mean, our female team is tougher than the men, so I know we're going to make the most of it.”

The Olympic success of women’s boxing has even helped the pro game: After women's boxing spent decades being treated as a curiosity or a sexist sideshow in the pro ranks, the Olympics propelled Shields and Taylor to professional careers while boosting the overall profile of the sport.

Promoters are now taking it seriously, which means increased audiences and greater opportunities — even if the financial rewards don't match the men yet.

What the future holds for Olympic women's boxing is just as unclear as the fate of the International Boxing Association (AIBA), which championed the advances in women's boxing before being suspended for the Tokyo Games over years of financial and ethical problems.

The sport's top officials and competitors would all like to add more fighters and more weight classes to pull even with the men, but the Olympics declined to increase the sport's total athlete quota before Tokyo, which meant more women and fewer men competing in 2021.

With Paris only three years away, many of the women in Tokyo are already making plans for 2024 — but they know the competition to get there will be even tougher.

“There’s so many more females out there,” said Britain’s Karriss Artingstall, the fourth featherweight quarterfinalist. ”There’s just not the categories for them to fill yet. There’s thousands, millions of girls that want to compete at the international level. They can't get the opportunity yet, but it's coming. Women’s boxing is still just getting huge.”