Only half of EPL clubs allowed fans when restrictions eased 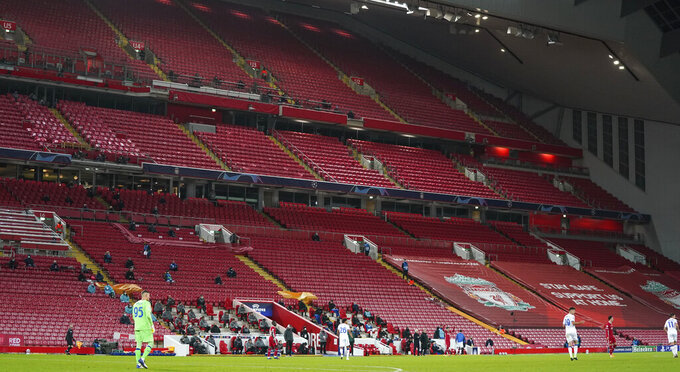 LONDON (AP) — Only half of the Premier League stadiums — mainly in London — will be allowed the return of some fans when coronavirus restrictions are relaxed next week, according to new government measures announced Thursday.

Another 10 top division clubs are in areas classified as the highest risk for COVID-19 infections so will remain closed to spectators, including Manchester sides United and City.

Even stadiums that can partially reopen will only have home fans, who will be asked to keep to social distancing and avoid close contact like hugging.

Up to 2,000 fans will be allowed into games at Liverpool and Everton from Wednesday because the region has been placed into tier two.

That is the same classification for London, providing entry for up to 2,000 fans at Arsenal, Chelsea, Crystal Palace, Fulham, Tottenham and West Ham, and on the south-coast for Brighton and Southampton.

That means Arsenal will be allowed to reopen the Emirates Stadium for the Europa League home match against Rapid Vienna next Thursday.

“While we appreciate that reduced capacity matches will be far from being ‘back to normal’, we can’t wait to welcome our fans back home for what will be a historic moment for the club," Arsenal said in a statement.

Manchester United's home game the previous night on Dec. 2 in the Champions League against Paris Saint-Germain — the day the national lockdown ends — will still be shut for spectators. But United will play in front of fans in London at West Ham on Dec. 2, which will be the first Premier League game since March to have any crowd.

The other clubs in tier three areas and closed to spectators are: Aston Villa, West Bromwich, Wolverhampton, Newcastle, Leeds, Leicester and Burnley.

Leeds manager Marcelo Bielsa said it is unfair to allow fans to return on a partial basis.

“It shouldn’t be about the category, or the consequences of being in a category, it should be about trying to maintain the competition as equal as possible with things that are controllable,” Bielsa said. “The presence of fans has an effect on the results. What the organization says is people who are from places where there’s a higher risk of infection, it means they will be penalized.”

Up to 4,000 spectators are permitted to elite sports events in tier one areas but they are currently only the Isle of Wight, Cornwall and the Isles of Scilly which have no professional football teams.

Fans have been largely shut out of sports events in England since March when COVID-19 was declared a pandemic. More than 56,000 people have died from the coronavirus in Britain.