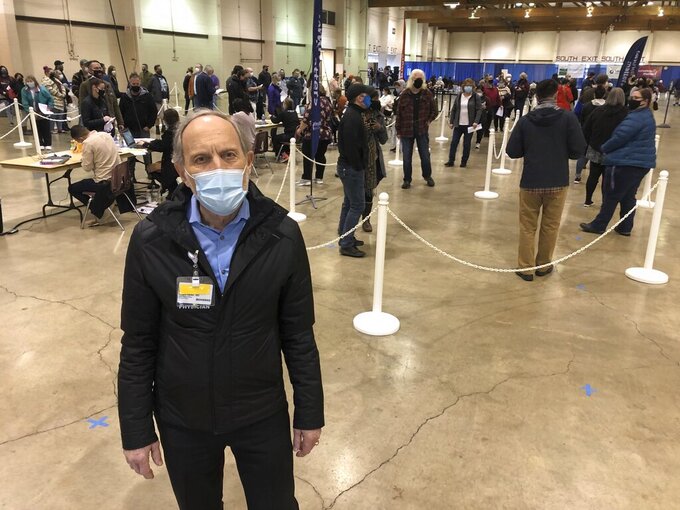 Dr. Ralph Yates, chief medical officer for Salem Health Hospital and regional care system in Oregon, poses for a photo on Friday, Jan. 8, 2021, at the Oregon State Fairgrounds, in Salem, Ore. where hospital personnel is giving COVID-19 vaccinations to a priority group of health care workers. They gave about 1,700 doses the previous day and expect to give around the same number on Friday. The Oregon National Guard will assist in the coming days. (AP Photo/Andrew Selsky)

SALEM, Ore. (AP) — Hundreds of people received COVID-19 vaccines Friday at the Oregon State Fairgrounds in a mass vaccination that the doctor in charge called “the most meaningful work of my career.”

Next week, the operation will be stepped up with the Oregon National Guard having been called up by Gov. Kate Brown to support the mission in Salem.

“The goal is to vaccinate 250 people per hour, vaccinating thousands of Oregonians,” Brown announced during a Zoom call with reporters.

“In terms of mass vaccinations (in Oregon) I think we're it,” Yates said. “This can be replicated easily.”

There is space in the building, almost the size of a Costco, to triple the vaccination stations when National Guard medics and other troops arrive as early as Tuesday.

Those eligible to receive the vaccination are in the top priority category set by the Oregon Health Authority, which includes hospitals, health care providers and residents at long-term care facilities; emergency medical service providers and other first responders.

The line of people waiting for their shots from Salem health staffers snaked into the parking lot. Oregon Health Authority Director Patrick Allen told reporters in a Zoom news conference with Brown that people would merely need to attest they're eligible for the shot. Both the Pfizer and Moderna vaccines are being used.

But Yates said the system had to be tightened after several people were found in line who did not qualify. Now, people are being asked what their jobs specifically are.

“We want the community vaccinated, but there isn't enough vaccine at this point,” Yates said.

The vaccinations at the fairgrounds started Wednesday with 200 vaccinations before getting into high gear at about 1,700 doses Thursday, and around the same number is expected on Friday, according to Yates.

“In my 41 years of medical practice, this is the most meaningful work of my career, right here,” Yates said. “Hope is here. It's not on the horizon; it's here.”

OHA expects that between 300,000 and 400,000 individuals will qualify for access to COVID-19 vaccination under Phase 1a.

Allen said the federal government has painted too rosy a picture about the rollout of the vaccines.

“This is going to take a while. I think it’s been challenging for people to hear that messaging from us when the federal government has been much more optimistic in its messaging and talking about ... how virtually everybody who wants a vaccine would be able to get it by June," Allen said.

He said the fall is “a reasonable target ... unless many more vaccines are approved or much, much more production comes online or more doses are purchased from manufacturers than are available now.”

On Friday, OHA recorded 7,994 doses of vaccine administered — including 578 second doses — raising the state’s total number of shots given to 74,914.

Questions have been raised about the governor announcing last month she wants to see schools reopen soon. In a letter to Brown on Thursday, teachers unions representing Oregon’s five largest school districts said that before schools open, staff and students need free and frequent access to COVID-19 testing and staff must have access to a vaccine.

“The harsh reality is that many of our kids across the state have been out of school for almost a year now in terms of in-classroom learning," Brown told reporters. "It’s extremely challenging for a lot of kids, particularly our littles, to be learning how to read or learning how to do math on a computer remotely.”

She also said some communities are not well connected or lack internet connections, and many parents are struggling with trying to take care of their children at home while also assisting in teaching and trying to do their own jobs.

The health agency also reported Friday that COVID-19 claimed seven more lives in Oregon, raising the state’s death toll to 1,575. There were also 1,755 new cases, bringing the total to 122,847 in a state with a population of around 4.2 million.

This story has been corrected to show the governor’s office now says the National Guard is arriving next week instead of this weekend.