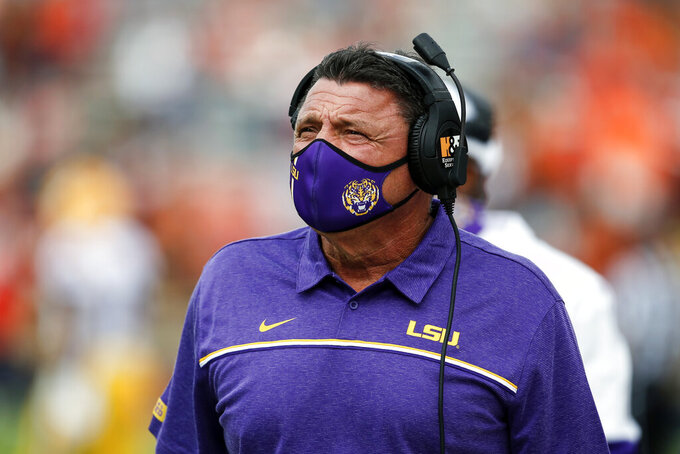 LSU head coach Ed Orgeron walks the sideline during the first quarter of an NCAA college football game against Auburn on Saturday, Oct. 31, 2020, in Auburn, Ala. (AP Photo/Butch Dill)

BATON ROUGE, La. (AP) — LSU coach Ed Orgeron says his team is contending with a corona virus outbreak and resulting quarantines that have made it difficult to know whether a number of starters or regulars will be available for Saturday's scheduled game against No. 1 Alabama — or whether the game might need to be postponed.

But Orgeron says he is certain that starting quarterback Myles Brennan will not be ably to play by Saturday because of an abdomen injury which has sidelined the QB for two games and might lead to a decision to shut Brennan down for the rest of the season.

“We're talking to the doctors right now to see what's the best for Myles,” Orgeron said during his usual Monday-of-game-week media conference. “Whether it's getting it fixed, getting it operated now or wait, I think we're still discussing that.”

Orgeron would not specify whether Brennan's top two backups — freshmen TJ Finley and Max Johnson — were affected by COVID-19 testing or quarantines, or whether their availability was in doubt.

“We have to see what happens," Orgeron said. "It’s a very fluid situation, but I will tell you we are very thin at that position.”

Orgeron said he did not want to say what his other options at quarterback are because he does not want to give away his game plan.

While Orgeron stressed he wanted to be cautious about answering medical questions and didn't want to get into the number of players affected by the team's latest outbreak, he noted that the problem when beyond the number of positive COVID-19 tests. The number of related quarantines due to possible exposure also have thinned his roster in recent days, he said.

The SEC requires teams to have at least 53 scholarship players available, less than that and the scheduled game cannot be played.

By the middle of the week, LSU expects to know if the game could still be held this weekend as scheduled, Orgeron said.

“It's going to be challenging, obviously with the guys that are out," Orgeron said. "When they tell me we're at a certain number or something like that — we can play or we can't play — I think that's up to the league ... but for right now, we're playing Alabama.”