Orioles-Red Sox opener at Fenway postponed because of rain 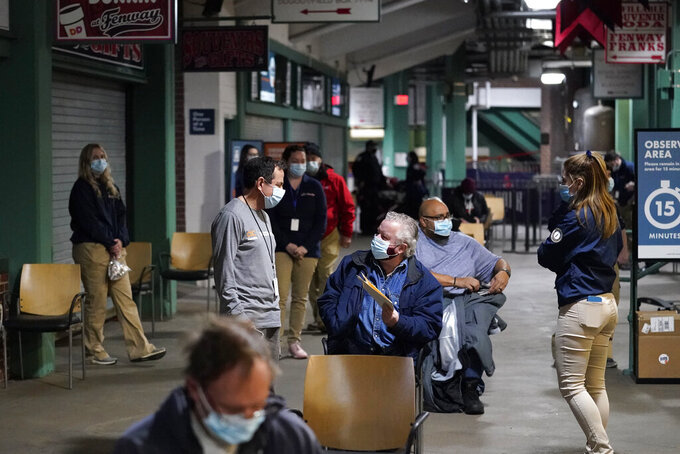 FILE - In this Jan. 28, 2021, file photo, Boston Marathon Race Director Dave McGillivray, second from left, oversees a COVID-19 vaccine injection site staged in a concession area at Fenway Park in Boston. More than 1 million COVID-19 vaccination shots have been given at Major League Baseball stadiums, with the Oakland Coliseum and Marlins Park among the sites planning to continue operating after opening day. The 11 ballparks that converted to mass vaccination centers in the offseason combined to pass a million total shots this week, MLB said Friday, March 25. (AP Photo/Charles Krupa, File)

BOSTON (AP) — The pandemic-delayed 2020 season is being followed up by a rain-delayed start to 2021 for the Boston Red Sox.

The Red Sox postponed their opener against the Baltimore Orioles at Fenway Park on Thursday because of rain that was forecast to last all day. The game will be made up on Friday, an off-day built into the schedule for just this possibility.

"One day, two days, three days — I really don't care, to be honest with you," Red Sox manager Alex Cora said. “I know there are a lot of guys that are excited, but I think it’s for the best. Tomorrow will be a better day weather-wise."

The Red Sox made the announcement at 9 a.m., about five hours before the scheduled first pitch. After delaying the start of the 2020 season until July and then playing in front an empty ballpark all year, the team had been cleared by the state to open Fenway Park to about 4,500 fans — 12% of capacity.

“The decision to postpone our first game of the season was not made lightly,” Red Sox President Sam Kennedy said. “We have been eager to have fans back at Fenway Park for the first time in 18 months and look forward to welcoming everyone back tomorrow under brighter and drier conditions.”

Nathan Eovaldi is still scheduled to pitch the opener against Baltimore's John Means. Cora said that Eduardo Rodriguez, who was scratched from the opening day start after missing his final spring training tune-up with a dead arm, will begin the season on the injured list.

“It's nothing long term. It’s just we ran out of time to build him up,” Cora said. “The hope is that he will be able to join us sooner than later, and sooner is next week.”

Rodriguez will instead pitch a simulated game at the team's alternate training site in Worcester. Rookie Tanner Houck is in line to pitch the second game of the season, on Saturday, followed in the rotation by Garrett Richards, Nick Pivetta and Martín Pérez.

Cora declined to identify his closer, saying both Matt Barnes and Adam Ottavino are “going to be very important in the eighth and ninth.”

“Talking to both of them, they know they will get important outs," Cora said. “I’m pretty sure where we want to go as a team, and they know it too.”

Cora is making his return to the Red Sox dugout after spending a year away from baseball to serve a suspension for his role in the Houston Astros cheating scheme.

“From my end I am just happy to be talking to you right now,” he told reporters on Thursday morning after the rainout was announced. “For obvious reasons. I can wait 24 hours.”