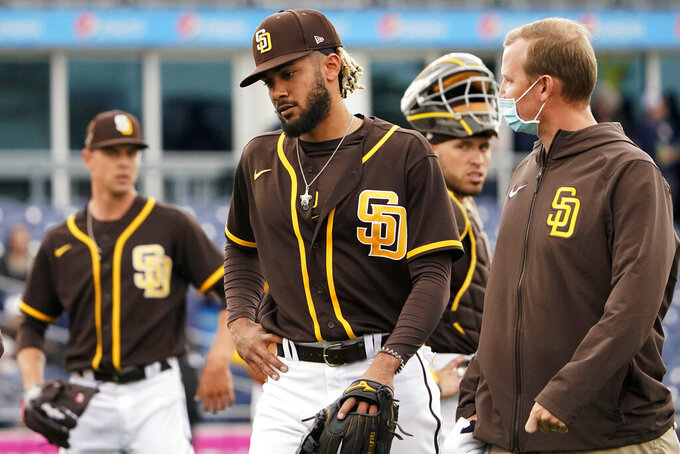 Fernando Tatis Jr. is feeling a lot better, a huge relief to the star San Diego shortstop, his team and his many fans.

A day after Tatis walked off the field during an exhibition game in a worrisome scene, the Padres said the discomfort in his left shoulder had improved.

In fact, the flashy 22-year-old wanted to play Wednesday night against San Francisco in Scottsdale, Arizona.

“He’s feeling really good today. In fact he was lobbying to get in the lineup today, so I thought that was very encouraging,” Tingler said.

“He’s going to have a good work day today and we’ll kind of see where it goes. I think everybody’s kind of expecting him to be back in the lineup in the next day or two. Very encouraging news,” he said.

The sight of Tatis suddenly leaving Tuesday’s game after making a backhanded play was a jolt to the Padres, who have high expectations for this season coming off San Diego’s first playoff appearance in 14 years. Tatis has quickly become one of the faces of baseball, and last month he signed the longest deal in major league history, for 14 years and $340 million.

Tatis fielded the ball hit by Cincinnati’s Jonathan India, made a one-hop throw to first base and then began walking off the field. He was met by Tingler and a trainer. After a few minutes in the dugout, Tatis headed toward the clubhouse accompanied by a trainer.

Tingler said after Tuesday’s game that Tatis has been dealing with a minor shoulder issue for a few years. The manager said he doesn’t know when Tatis first encountered the shoulder issue.

“Right now it just kind of pinched reaching for the ball. As far as has it been looked at? Of course it’s been looked at. Obviously he just did a very nice deal and we’re very thorough with those things. Look, there are no surprises here," Tingler said.

Tatis is hitting .391 in 10 exhibition games, but it hasn’t been a smooth spring for him. He missed time with flu-like symptoms and then jarred himself after diving headfirst into home on a flyball to shallow left field in a game on March 13. That slide might have aggravated the shoulder issue, and it kept him out of several games.

Carlos Correa homered, doubled and drove in three runs as Houston rallied from an 8-0 deficit after two innings. Kyle Tucker also had two hits and three RBIs to help the Astros overcome a horrendous debut for new starter Jake Odorizzi.

The veteran right-hander, who signed a $23.5 million, three-year contract as a free agent on March 8, served up four homers and got only three outs. He was charged with seven runs, six hits and two walks.

Ryan Zimmerman homered off Odorizzi in each of the first two innings, giving him five long balls this spring. Josh Bell also hit his fifth, and Kyle Schwarber his fourth. Schwarber also doubled and scored twice.

Nationals starter Stephen Strasburg walked five in four innings. He gave up four runs and three hits, striking out one.

Strasburg, dealing lately with what was described as a left calf strain, revealed he tore a tendon in his leg that doctors say is not needed.

“Really once I kind of ruptured the tendon, it was three to five days, a little period of tightness, but it really wasn’t an issue,” Strasburg said.

“It’s basically the plantaris tendon in your calf. I guess you don’t really need it. It’s kind of one of those lucky things where it just kind of went away and not really a big issue,” he added. “The doctor was pretty adamant about it, said if we still walked on all fours, you might need it. But you don’t need it anymore.”

Bo Bichette hit his first two home runs for Toronto. He also singled and scored on a homer by Teoscar Hernández. Marcus Semien added an RBI.

Blue Jays third baseman/outfielder Cavan Biggio was scratched from the lineup with discomfort in his right pinkie finger. He took a throw off his finger on Monday, according to the team.

Deivi García, competing for a spot in the rotation, struggled in his fifth start for New York, surrendering four runs on seven hits and two walks in three innings. Gary Sánchez and Brett Gardner each had two hits.

Yankees manager Aaron Boone said after the game he had received the coronavirus vaccine and will encourage his players to receive it.

Chris Archer made his second start in his third appearance for Tampa Bay, allowing one run on one hit and a walk in 3 1/3 innings. Manuel Margot, Austin Meadows and Mike Zunino each had two hits, Joey Wendle homered and Yandy Díaz had a two-run single.

Michael Pineda was roughed up in his second start for Minnesota, surrendering five runs on nine hits in five innings. Andrelton Simmons, who was just 1-for-17 this spring, hit his first home run and singled and stole a base. Byron Buxton tripled and Ryan Jeffers' first homer.

Corey Oswalt made his first start in his third appearance for New York, allowing one run on two hits in four innings. Jeff McNeil had a double for one of the Mets' four hits.

After the game, Oswalt was reassigned to the minors and right-hander Jordan Yamamoto was optioned to Triple-A, making lefty Joey Lucchesi the likely pick to open the season as New York's fifth starter behind Jacob deGrom, Marcus Stroman, Taijuan Walker and David Peterson.

Sean Manaea worked into the fifth inning in the start for Oakland, leaving with one out after scattering two runs on five hits, walking two and striking out three. Sean Murphy hit a solo home run, doubled and drew a bases-loaded walk. Stephen Piscotty, who got a cortisone shot Friday to treat a sore left wrist, homered in the sixth. Ka’ai Tom, a Rule 5 pick who missed the start of spring training with an oblique injury, singled in a run and is hitting .450 since making his Cactus League debut on March 15.

Outfielder Eloy Jiménez left the game in the second inning with shoulder discomfort after attempting to take away a home run. Lance Lynn worked five innings in the start for Chicago, allowing three runs on five hits, two of them solo home runs, and striking out four.

Los Angeles starter José Quintana worked 4 1/3 innings and gave up an earned run on four hits, walked two and struck out four. Mike Trout and Dexter Fowler each doubled and Justin Upton his his fourth home run. with two aboard in the sixth. Shortstop José Iglesias turned in a spectacular defensive play, diving to his left and throwing out Cam Gallagher from a seated position.

Jakob Junis struck out three of the six batters he faced in relief and Greg Holland retired the side in order in the fifth. Hunter Dozier hit his fourth home run.

Jon Gray gave up three home runs over 2 1/3 innings in his start for Colorado, allowing seven runs on seven hits. Josh Fuentes singled, doubled and had four RBI. Raimel Tapia drove in two runs with a pair of hits.

Christian Yelich hit a grand slam and Kolten Wong and Travis Shaw also homered for Milwaukee. Starter Adrian Houser gave up seven runs on nine hits over 3 1/3 innings. Brad Boxberger struck out all three batters he faced in the eighth.

JT Brubaker made his fourth start for Pittsburgh, allowing three runs on three hits and a walk, striking out six in five innings. Adam Frazier hit his second home run and is hitting .563 this spring. Kevin Newman had two hits and a sacrifice fly, raising his average to .727 (16-for-22).

The Pirates announced left-handed starter Steven Brault will be shut down for at least a month to address discomfort in his throwing shoulder. Pirates director of sports medicine Todd Tomczyk said it’s likely Brault will be out for a minimum of 10 weeks. The team had expected Brault to be a part of a totally revamped starting rotation in 2021.

José Ureña made his second start in his third appearance for Detroit, pitching 4 2/3 innings and allowing one run on five hits and a walk. Robbie Grossman homered, Miguel Cabrera had two hits and Wilson Ramos had an RBI double.

Iván Nova made his third start in his fifth appearance for Philadelphia, giving up four runs on 10 hits in five innings.

Josh Naylor homered and drove in two runs for the Indians. Roberto Pérez had a two-run double.

Dinelson Lamet made his spring debut for San Diego and worked one inning, giving up Solano’s solo homer. Lamet finished fourth in NL Cy Young Award voting last year but missed the playoffs with an arm injury. It doesn’t appear he’ll be ready to begin the season.