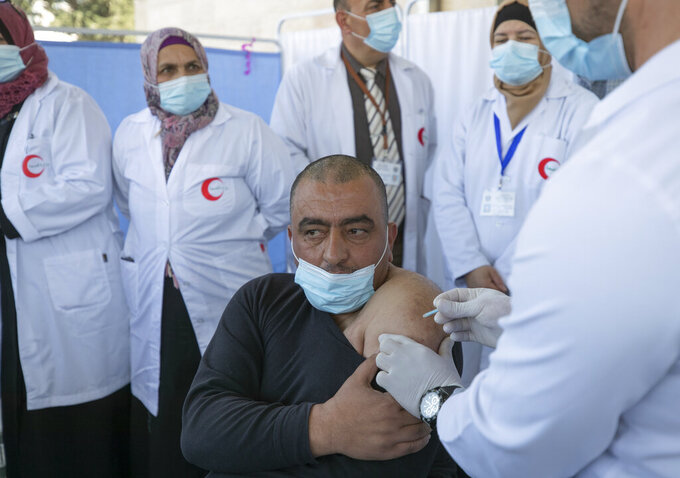 FILE - In this Feb. 3, 2021 file photo, a medic administers a Moderna COVID-19 vaccine to a fellow medic during a campaign to vaccinate front-line medical workers, at the health ministry, in the West Bank city of Bethlehem. The Palestinian Authority's decision to divert some of its tiny stockpile of coronavirus vaccines to senior officials, soccer players and others has sparked controversy, feeding into long-standing concerns about corruption as it struggles to respond to a worsening outbreak. (AP Photo/Nasser Nasser, File)

RAMALLAH, West Bank (AP) — The Palestinian Authority's decision to divert some of its tiny stockpile of coronavirus vaccines to senior officials, soccer players and others has sparked controversy, feeding into long-standing concerns about corruption as it struggles to respond to a worsening outbreak.

The PA has repeatedly said that its first vaccines would go to medical workers and elderly patients, who are at greatest risk of severe illness or death. But to date it has only acquired enough doses to inoculate 6,000 people in a population of nearly 5 million.

“We have focused from the beginning on health workers, but there are around 100,000" in the occupied West Bank and Gaza, Health Minister Mai Alkaila told reporters on Tuesday. “It’s not enough.”

The Health Ministry says it has secured tens of thousands more doses through a World Health Organization program designed to aid poor countries and through agreements with pharmaceutical companies, but they have yet to materialize following weeks of delays.

Israel, which has faced international criticism for not sharing its vast stockpile with Palestinians living in territories it has controlled for more than a half-century, has given the PA 2,000 doses of the Moderna vaccine. The PA acquired another 10,000 doses of the Russian-made Sputnik V vaccine. Both are given in two doses.

The Independent Commission for Human Rights and Aman, another Palestinian group that promotes transparency, have each issued statements calling on the Palestinian government to explain the criteria used for distributing the vaccines.

The ICHR said it had documented cases in which the vaccine was distributed “based on mediation and personal relationships, without a justified medical priority,” as well as cases in which officials had helped their relatives to obtain the vaccine without medical justification.

Alkaila said 2,000 doses have been shipped to Gaza, which is ruled by the Palestinian militant group Hamas and is under an Israeli-Egyptian blockade. She said another 200 doses have been sent to the royal court in neighboring Jordan, without providing details.

Of the remaining 9,800 doses, she said 90% have been given to health workers. The remainder went to security forces who guard President Mahmoud Abbas — who is 85 — and Prime Minister Mohammad Shtayyeh. They also went to senior members of the Palestine Liberation Organization who are over age 65, as well as civil servants preparing for elections planned for later this year.

Alkaila said vaccines were also given to members of the national soccer team to allow them to represent the Palestinians in international matches, and to students who require certificates of vaccination to study abroad.

She acknowledged that authorities had erred by giving the vaccines to at least two journalists in Bethlehem but said they had acted contrary to regulations and were admonished for it.

The Palestinian Authority was established in the 1990s as part of agreements with Israel to administer parts of the occupied West Bank and Gaza, territories Israel captured in the 1967 war that the Palestinians want for their future state. Under those agreements, the PA is responsible for health care in the areas it administers, but both sides are to cooperate in combatting epidemics.

As the Palestinians' hopes for independence have faded over the last two decades, the PA has become less popular and more authoritarian — with senior officials widely seen as neglecting the national cause while enjoying the perks of cooperation with Israel. Abbas' mandate expired more than a decade ago, and general elections have not been held in 15 years.

The Palestinians have reported nearly 190,000 cases and at least 2,063 deaths since the pandemic began, and the PA imposed new restrictions this week in response to the rising number of cases.