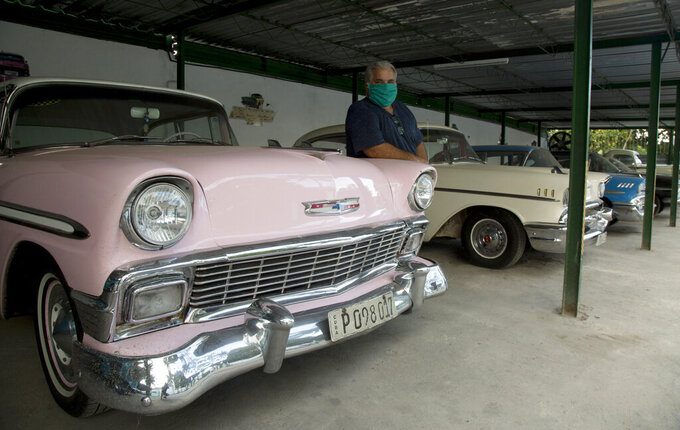 Julio Alvarez poses for a photo with his vintage American cars that tourists use to joy ride around Havana, Cuba, Friday, April 24, 2020. While only essential work is allowed to continue amid a lockdown to contain the spread of the new coronavirus, Alvarez's cars are grounded, tourists have disappeared and his drivers remain home. (AP Photo/Ismael Francisco)

Until a few weeks ago, Julio Álvarez was the image of a successful Cuban entrepreneur. He had a dozen cars — classice Chevrolets and Fords thaT arrived before the 1959 revolution — conveying photo-snapping foreign tourists along Havana's seafront Malecon for $30 an hour.

Now the new coronavirus has hit and the cars are parked, the tourists quarantined in their home countries and the drivers shut up in their own homes.

The pandemic that has frozen businesses around the world has been tough as well on the fragile private sector that has been permitted to blossom at times through the cracks of Cuba's socialist economy.

A record 600,000 people had taken out licenses to operate permitted forms of private businesses in Cuba under limited economic reforms launched by then-President Raul Castro in 2010. Many catered heavily to foreign tourists.

Then first three cases of the pandemic hit Cuba on March 11. Thirteen days later, authorities suspended classes, shut airports and told foreign tourists to stay in their hotels pending a trip off the island. Car rental services and recreational activities were closed.

Since then, at least 139,000 private businesses have temporarily handed back their licenses — permits which otherwise require them to pay monthly fees.

“We are at an impasse,” said Álvarez, co-owner of Nostalgicar, a family business launched nine years ago. “We have 16 workers contracted. We can't maintain them. They earned their money and are living on their savings.”

It's become common to find “closed” signs on private cafes, bars, restaurants and lodging houses, to say nothing of the paralyzed taxi and car services like Nostalgicar that accounted for some 50,000 of those private business licenses.

Legal entrepreneurs, who first emerged in the tough days of the 1990s following the collapse of Cuba's aid and trade with the Soviet Union, have had to struggle with occasional waves of disapproval from the state, which has imposed strict limits on the size and types of activities allowed, as well as the impact of U.S. sanctions that have aimed to squeeze off the flow of tourists.

“The private sector, especially the most attractive businesses ... entered this already suffering a contraction due to the hardening of the (U.S.) embargo policy toward Cuba, which included the closure of cruise ships," said Omar Everleny Pérez, a local economist. “After the cancellation of (U.S. airline) flights to the provinces, there were limits on people who came.”

Although 70% of Cubans work for the state, more than half a million had taken advantage of the 2010 opening to open businesses ranging from small repair and sewing shops to gourmet restaurants.

Many of private workers saw a sharp increase in their incomes. Alvarez said his mechanics earn about 2,000 Cuban pesos ($80) a month, 10 times what they'd make in a state repair shop.

The pandemic, which has infected at least 1,400 people and claimed more than 50 lives in Cuba, hit at a time when the economy already was sluggish. The Trump administration has tightened the U.S. embargo and Venezuela, which had been a key supporter of the island, itself has plunged into crisis.

Cuba's government reported gross domestic product grew by just 0.5% last year, and long lines had once again become common for some types of foods because the government found it hard to raise hard currency. The U.N.'s Economic Commission for Latin America and the Caribbean last week estimated that Cuba's economy would contract by 3.7% this year. Pérez said the drop could be as sharp as 5%.

Cuba's also hurt by an expected drop in remittances sent back by Cubans and Cuban-Americans in the United States and elsewhere. That money often provides key capital for the small private businesses.

Economist Emilio Morales of the Miami-based Havana Consulting Group estimates Cuban citizens received some $3.6 billion in remittances in 2018, in addition to an estimated $3 billion in goods brought to the island by visiting emigrants.

A few entrepreneurs said they think the crisis may eventually encourage the government to allow a greater expansion of private business, though still within a socialist system.

“I am optimistic,” said Gregory Biniowsky, a Canadian living in Cuba and cofounder of the now-shuttered Nazdarovie restaurant. “Though we are going to recover slowly,” he added.

“This crisis could shake the state and decision-makers to be more open and to make changes within Cuba that help entrepreneurs, such as permitting us to import raw materials.... They can't permit themselves the luxury that the non-state sector collapses.”