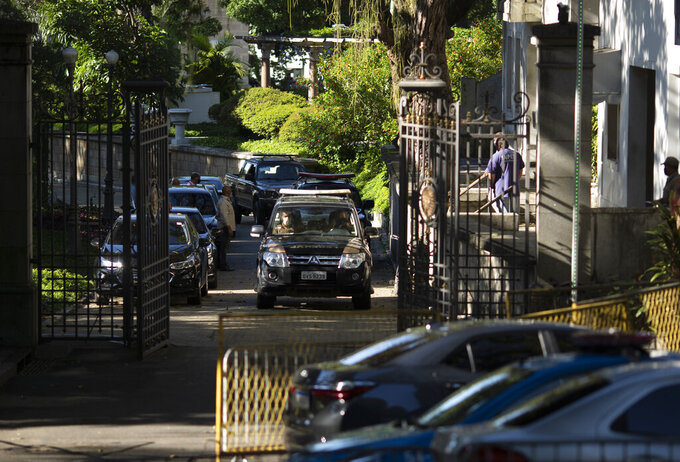 RIO DE JANEIRO (AP) — Brazil's Federal Police searched the official residence of Rio de Janeiro Gov. Wilson Witzel on Tuesday, part of an investigation into the alleged embezzlement of public resources in the state’s response to the COVID-19 pandemic.

Police did not say whether Witzel, a former federal judge, was personally targeted by any of the 12 search and seizure warrants in Rio and Sao Paulo states. An ongoing investigation pointed to irregularities in contracts awarded for the construction of emergency field hospitals in Rio, and involved health officials, police said in a statement.

“There is absolutely no participation on my part in any type of irregularity,” Witzel said in a statement. He also implied that he was the target of political revenge, saying “interference announced by the president of the republic has been made official.”

Brazilian President Jair Bolsonaro has openly challenged many governors' measures for containing the spread of the new coronavirus, with Witzel a primary focus. Bolsonaro has accused governors of inciting panic among the population with allegedly excessive stay-at-home recommendations and restrictions on commerce that he says will wreck the economy and produce worse hardship than the virus.

Bolsonaro, for his part, has been accused of attempting to improperly meddle in the federal police for political or personal ends, a claim made by former Justice Minister Sérgio Moro when he resigned last month. The allegations are at the heart of an investigation the Supreme Court authorized on April 27.

Carla Zambelli, a federal lawmaker who is close to the president, said in an interview Monday with Rádio Gaúcha that the Federal Police force was investigating governors for crimes related with coronavirus contracts. While she didn't say which governors were being investigated, Witzel pointed to comments from lawmakers aligned with Bolsonaro as evidence there had been a leak and an attempt to "build a narrative that will never be confirmed.”

Bolsonaro, speaking in the capital Brasilia, denied any prior knowledge of the raid.

“I learned about it now,” Bolsonaro told reporters on Tuesday morning. “Congratulations to the Federal Police.”

On May 14, federal prosecutors launched a separate operation looking at the state's COVID-19 response, serving 25 search and arrest warrants in Rio and neighboring Minas Gerais states.

Federal prosecutors said then that a group of businessmen had sought to take advantage of the new coronavirus pandemic and diverted some 3.95 million reais (over $725,000) in public resources through contracts for the construction of field hospitals.

AP photographer Eraldo Peres contributed to this report from Brasilia.