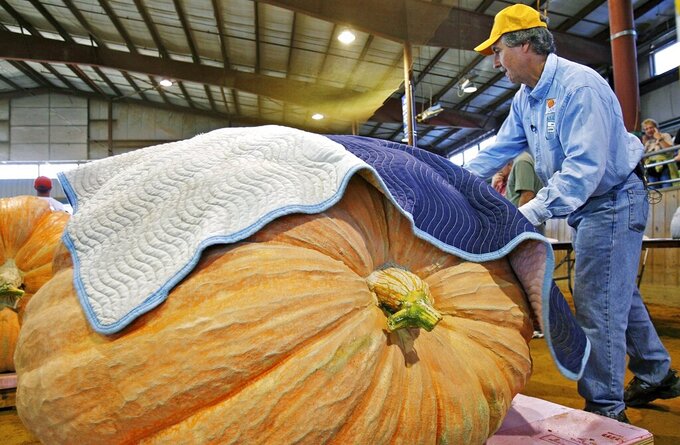 FILE - In this Sept. 29, 2007, file photo, Joe Jutras prepares to wrap his pumpkin to be fitted into a gathering strap during the annual New England Giant Pumpkin Weigh-Off at the Topsfield Fair in Topsfield, Mass. The 200-year-old Massachusetts agricultural fair, which had been scheduled to open on Oct. 2, 2020, was canceled due to the coronavirus pandemic. (Wendy Maeda/The Boston Globe via AP, File )

BOSTON (AP) — The coronavirus pandemic has forced the cancellation of a more than 200-year-old Massachusetts agricultural fair for just the third time in its history, organizers said Wednesday.

The Essex Agricultural Society, the organization that runs the Topsfield Fair that was scheduled for Oct. 2-12 this year, said the decision was made for the safety of fairgoers, staff, volunteers, vendors, exhibitors and sponsors.

“We understand the impact of this decision for small businesses, family farms, competitors, and exhibitors and the disappointment of hundreds of thousands of people who look forward to the Topsfield Fair each year,” General Manager James O’Brien said in a statement on the fair's website. “As our scheduled opening day got closer it became clear that we could not create a fun, safe, and enjoyable experience that fairgoers have come to expect and deserve.”

The fair, which began in 1818 and bills itself as America's oldest, has been canceled twice before — in 1918 because of the worldwide flu pandemic, and for three years during World War II.

One of the fair's most beloved events is the giant pumpkin contest.

Nurses for the Boston public school system along with teachers and bus drivers gathered at City Hall on Wednesday to demand that Mayor Marty Walsh and Superintendent Brenda Cassellius provide better assurances that schools will be safe when they reopen this fall.

The nurses also demanded a larger voice in reopening plans.

The Boston Teachers Union is urging the city to implement policies consistent with safe nursing practices, offer rapid COVID-19 testing at all schools, and provide all staffers and students with sufficient personal protection equipment.

The number of positive COVID-19 cases linked to a house party in Chatham earlier this month has climbed to 13, officials say.

The party July 12 was attended by 30 to 50 people, many of whom were apparently seasonal restaurant workers.ant

Chatham Director of Natural Resources Robert Duncanson told the Cape Cod Times on Tuesday that town officials are now “aware of 13 cases” linked to the party.

He said 34 people were tested Monday at a pop-up clinic for people who were at the party or had close contact with partygoers.

Also on Cape Cod, eight Falmouth lifeguards tested positive for the coronavirus last week after attending a party the week before, the newspaper reported.

A charity bicycle ride from Springfield to Boston in memory of fallen police officers and firefighters has been canceled because of the coronavirus.

The 106-mile Ride to Remember was scheduled for Sept. 12, but with Massachusetts still banning large groups and requiring social distancing, the ride’s Board of Directors opted to cancel this year's in-person event, principal organizer John Delaney told Masslive.com on Tuesday.

Instead, people who have signed up for this year’s ride are invited to go for a ride, either solo or in small groups, along any route and any distance of their choosing.