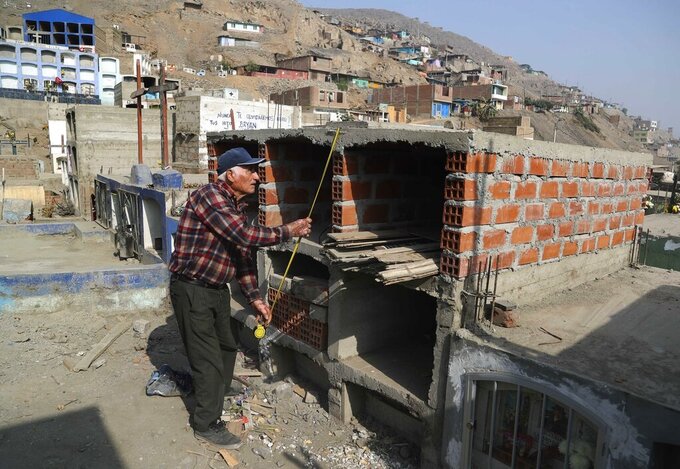 Retired merchant Victor Coba takes measurements of the tombs he's building for his family at San Lazaro cemetery on the outskirts of Lima, Peru, Wednesday, May 12, 2021. The 72-year-old retired merchant is building graves for himself, his wife and four other relatives in a narrow space in the cemetery after watching learning that two dozen of his neighbors died of coronavirus. (AP Photo/Martin Mejia)

LIMA, Peru (AP) — After Joel Bautista died of a heart attack last month in Peru, his family tried unsuccessfully to find an available grave at four different cemeteries. After four days, they resorted to digging a hole in his garden.

The excavation in a poor neighborhood in the capital city of Lima was broadcast live on television, attracting the attention of authorities and prompting them to offer the family a space on the rocky slopes of a cemetery.

“If there is no solution, then there will be a space here,” Yeni Bautista told The Associated Press, explaining the family’s decision to dig at the foot of a tropical hibiscus tree after her brother’s body began to decompose.

The same plight is shared by other families across Peru. After struggling to control the coronavirus pandemic for more than a year, the country now faces a parallel crisis: a lack of cemetery space. The problem affects everyone, not just relatives of COVID-19 victims, and some families have acted on their own, digging clandestine graves in areas surrounding some of Lima’s 65 cemeteries.

The desperate lack of options comes as the country endures its deadliest period of the pandemic yet. More than 64,300 people who tested positive for COVID-19 have died in Peru, according to the Health Ministry, but that figure is almost certainly an undercount. A vital records agency estimates that the true figure is more than 174,900, counting those whose possible infection was not confirmed by a test.

As recently as April, an infected person died every four minutes at home or in a hospital, and hospital space has been so scarce that Peruvians have read on social media about families offering kidneys, cars or land in exchange for one of the country's 2,785 intensive care beds.

Even when cemetery space can be found, burials pose a huge financial burden, especially for families who have fallen into poverty because of COVID-19. The cost of a burial in a cemetery on the edge of Lima is nearly $1,200, almost five times the monthly minimum wage of $244.

Retired merchant Victor Coba took matters into his own hands, building graves for himself, his wife and four other relatives in a narrow space in a cemetery at the foot of a treeless hill in the north of Lima.

Coba, 72, carried bricks, sand and cement to the site, where with help from a friend he began constructing his “eternal home.” He and his wife decided to act after watching the news and learning that two dozen neighbors died of COVID-19.

“You feel quite worried when there is nowhere to take them, and there are no pennies with which to bury them,” Coba said.

Many of Peru’s sprawling cemeteries have grown with no development plans or government approval. They lack walls or fences and are adjacent to irregular settlements, making it nearly impossible at times to determine where they end and where the impoverished communities begin. Graves are now encroaching on the settlements.

Of Lima’s 65 cemeteries, only 20 have a health license. One on a hidden hill has been operating for 24 years and does not require any paperwork for burials, which cost $361.

“Many cemeteries are in a state of collapse,” said Martín Anampa, an official from Carabayllo, the oldest municipality in Lima. “We are living the outcome of a bad planning process that they have had throughout history.”

Juan Bañez, 51, the father of two children, died of COVID-19 after waiting for an ICU bed. His cousin, Felix Albornoz, and other friends recently carried his coffin through a graveyard on a dusty hill to bury him in a recently expanded area of the cemetery.

“In the outskirts of Lima, in the poor areas, people come to bury themselves in the hills," Albornoz said. "There is no support. The government has abandoned us.”

Back in the Virgen de Fátima neighborhood, in the far east end of Lima, Joel Bautista died May 1 at the age of 45. He lost his eyesight by the time he finished middle school because of a congenital condition. He was unemployed but helped his sister and nieces around the house, which they all shared.

He was a fan of Mexican rock band Maná. Their song “Corazón Espinado” was played constantly during the wake, which lasted longer than expected because of the struggle to find a place to bury him.

“Everything is at critical point because of this pandemic that we are going through,” said Yeni Bautista, 52. “Cemeteries are collapsing due to deaths from COVID, but it does not mean that they are going to deny us a space. I am not asking for a huge area, but a tiny space to bury him.”