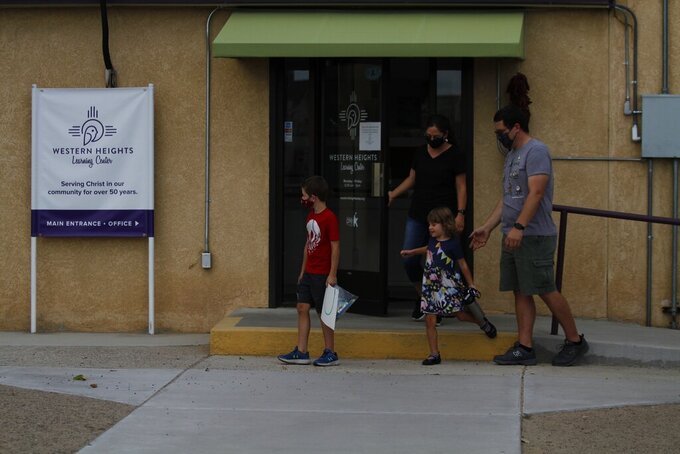 Public elementary school teachers Julia and Seth Hooper pick up their children Emry, 7, and Ivy, 4, on Monday, Aug. 10, at the Western Heights Learning Center in Albuquerque, N.M. The Hoopers said Emry will attend a private school at the center this fall because public schools won't be in person. Emry struggled with online learning in the spring and his parents were unable to help him while simultaneously teaching other online classes. (AP Photo/Cedar Attanasio)

Many have written off online learning as insufficient for their child or impractical for their work life. Even those working at home found it nearly impossible to do their job and parent when schools first closed and classes went online in March. State education officials also have acknowledged that younger children have the hardest time with online learning and require the most attention from parents.

“My attention was constantly split, and he ended up watching four or five hours of cartoons a day, which was like frying his brain probably, so I felt like a bad parent,” she said.

Strongheart, who lives in a small community just north of Santa Fe, can't afford day care and would face long waitlists even if she could.

Many child care centers are shuttered and state officials say they might not be able to provide subsidies for all families who are eligible. That would include single parents who earn around $34,000 a year, or 200% of the federal poverty line.

Public schools are closed for in-person classes until at least Labor Day, and how soon they reopen will depend on the pace of virus.

“Without everyone being able to go back to school in person, I have no doubt that we’re going to fall short on meeting everyone’s needs and child care,” the governor said during a briefing in late July.

Of the 995 licensed child care centers in New Mexico, less than 60% were open at the height of the pandemic, according to the Early Childhood Education Department. As of last week, 627 were open and the state was working to get more open.

The agency supported child care centers over the summer with staff, subsidies and parent copay waivers. It has approved 66 emergency permits to allow family, friends, and neighbors to care for up to four children from low-income households after a background check.

Traditional child care centers are struggling to bring back workers while complying with social distancing guidelines that reduce capacity and revenue.

“There’s a lot of consternation around the unemployment because we know the child care staff are some of the lowest-paid staff in our state,” Early Childhood Education Secretary Elizabeth Groginsky said Tuesday following a call with child care providers.

Nonprofit child care centers such as the United Way and YMCA have also reduced capacity due to the pandemic.

“Before COVID we had room for a lot more,” says Katherine Freeman, president and CEO of United Way of Santa Fe County.

Due to an uptick in donations, the United Way retained staff by paying them time-and-a-half.

Strongheart, the single mom, found some support over the past few months but she’s living week-to-week and has no idea what will come next.

Her mother babysat for her until moving out of the family home in June. Day camps run by the United Way offered a temporary lifeline but now her son is too old for the program.

In two-parent homes where both adults are working, the challenges are similar.

A few weeks into online learning, first-grade teacher Julia Hoover of Albuquerque found her 7-year-old son Emry in tears in front of his computer.

“He was called on and he didn't hear the directions, and he just shut down,” said Hoover, 39. “He couldn't move past that point and so he started crying.”

She and her husband, Seth Hoover, are both teachers at Kit Carson Elementary.

Despite a life-long commitment to public education, they decided to put Emry in private school, where they know he can attend in person. Seth Hoover said they would have done it earlier had they not felt guilty.

Strongheart's son will remain in public school. She's optimistic that her circle of neighbors and fellow single moms will find a way to help one another.

For months, they've been supporting each other — one text message, one play date at a time.

“It’s almost like we all created this little lifeboat together," Strongheart said. "But all of that is spontaneous, all of that is week by week ... and that is its own sort of exhaustion.”