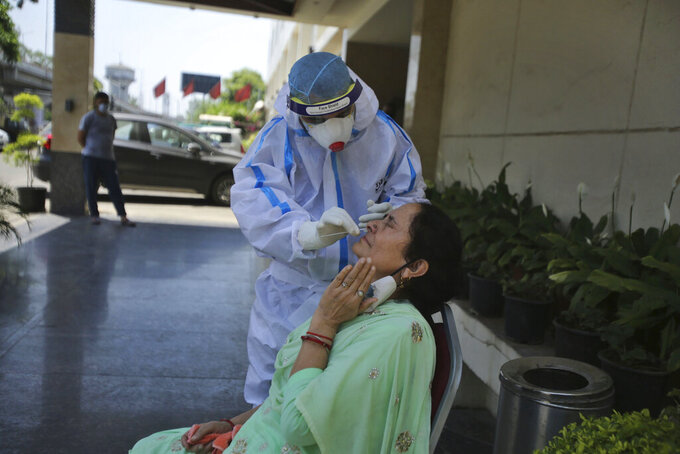 A woman gets nasal swab taken to test for the coronavirus in Jammu, India, Monday, June 15, 2020. India is the fourth hardest-hit country by the COVID-19 pandemic in the world after the U.S., Russia and Brazil. (AP Photo/ Channi Anand)

The outbreak of the coronavirus has dealt a shock to the global economy with unprecedented speed. Following are developments Monday related to the national and global response, the work place and the spread of the virus.

RATATOUILLE & RICE CONGEE: Bars and restaurants are moving beyond window service in Asia, Europe and North America. The viral outbreak has devastated the industry and the service sector.

— The fabled Parisian cafes and restaurants reopened Monday for the first time since the virus forced them to close their doors March 14. The surprise permission to reopen came from France’s president himself, in a televised address to the nation Sunday night. Restaurants outside the Paris region opened earlier this month, and Paris cafes were allowed to serve people outside, but not open their doors.

— Thailand further eased restrictions on restaurants Monday. Bangkok’s many eateries, which reopened in May after being shut down for more than a month, are now allowed to serve alcoholic drinks again, and there is no longer a curfew. The lack of alcoholic drinks squeezed margins even further in the besieged industry. Most restaurant owners are still unsure if their businesses can survive with the restrictions that still exists, and so many still sheltering at home.

BAD SHAPE: Gyms and other health-related businesses have been among the hardest hit during the pandemic. Gold’s Gym, founded in Venice, California, by a former bodybuilder Joe Gold, filed for Chapter 11 bankruptcy protection last month and others are teetering.

— 24 Hour Fitness filed for Chapter 11 bankruptcy protection. The company said Monday that it has secured about $250 million in debtor-in-possession financing. It anticipates the financing, along with cash from operations, will provide sufficient liquidity and allow it to continue operations without interruption as it restructures its finances.

— GNC Holdings reached a deal with lenders to extend the maturity dates for some loans. The health and wellness company said in a regulatory filing that due to COVID-19, it did not expect to be able to satisfy some conditions. The company said it continues to explore all strategic options available to refinance and restructure its debt.

TRAVEL: Airlines are still trying to get people on planes and navigate strict national travel policies. Travel is picking up.

— United Airlines is mortgaging its frequent-flyer program to raise cash, underscoring the financial crisis facing airlines. The airline said Monday that it raised $5 billion in the deal with Goldman Sachs, Barclays and Morgan Stanley. United executives said the airline won’t have to give up any equity or control over the MileagePlus program.

United also said it expects to have $17 billion in available cash at the end of September compared with normal liquidity of between $5 billion and $6 billion.

— The Transportation Security Administration screened 544,046 people on Sunday, the largest number passing through U.S. airport checkpoints since March 21. That is still down 79% from a year ago.

— U.S. airlines lost $5.2 billion in the first quarter — ending a string of 27 straight profitable quarters, according to the Transportation Department. Analysts expect the second quarter to be much worse. A year ago, the airlines reported a first-quarter profit of $2 billion.

— Ukraine has resumed international flights. The Borispil airport in Kyiv on Monday is set to operate 15 flights to countries including Belgium, the Netherlands, India, Israel and the UAE. Those arriving from countries with high infection numbers will still be required to spend two weeks in quarantine.

GOVERNMENTS & CENTRAL BANKS: Nation's are deploying all tools available to reignite economic activity. Spikes in infections, however, is making it difficult to create a model for recovery.

— The Spanish government is launching a 3.7-billion-euro ($4.1-billion) aid package to shore up its automobile manufacturing industry in the wake of a first wave of coronavirus.

The two-year package unveiled Monday includes subsidies for the purchase of cars, plans to spur investment in the industry, particularly for more electric vehicles, and workforce training.

— Greece is officially open to tourists Monday, with the first international flights expected into Athens and the northern city of Thessaloniki. Hotels and museums are also opening across the country, as are gyms. A ban on flights from Italy, Spain and the Netherlands has been lifted, although the one on flights from Britain remains in place.

MARKETS: Stocks are falling again Monday on fears that new waves of coronavirus infections could derail the swift economic recovery that Wall Street was sure was on the way.

CLEANING UP: Many sheltering at home have come to realize that when it comes to cleanliness, the robot is your friend. iRobot orders were much stronger than expected during the second quarter and the company upped its sales expectations. iRobot now anticipates second-quarter revenue of between $260 million and $270 million. It previously predicted revenue to be down from its first-quarter revenue of $193 million.