Patriots hang tough despite long odds in loss to Chiefs 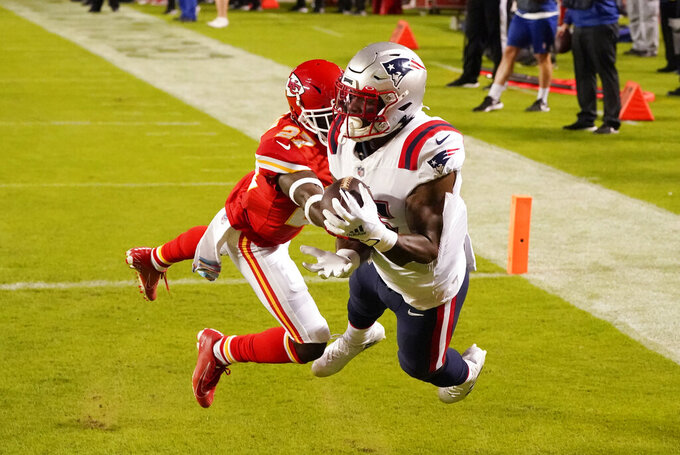 KANSAS CITY, Mo. (AP) — The New England Patriots weren’t about to make any excuses for their loss to the Kansas City Chiefs on Monday night.

Even if they had plenty from which to choose.

Running back Sony Michel went on injured reserve earlier Monday with a quad injury, and their ground game was further hamstrung by the loss of right guard Shaq Mason to a calf injury and right tackle Jermaine Eluemunor to migraines.

Then there was the constant COVID-19 testing the past three days, the mixed-up schedule, the late flight into Kansas City and the quick bus ride to Arrowhead Stadium for a primetime showdown with the defending Super Bowl champions.

“It’s just a situation we had to go through. A lot of testing. We had to adjust a lot,” Patriots cornerback Stephon Gilmore said after the Chiefs escaped with a 26-10 win. “Kansas City had to do the same thing. No excuses. At the end of the day we came out and fought as much as we can. We just came up a little short.”

The Patriots gave it everything they had. They trailed just 6-3 at halftime.

“Obviously a very unique situation starting from Saturday morning. We kind of had to maneuver some things and figure some things out,” said Stidham, who took over for the ineffective Hoyer in the second half. “We played really hard. Some things we can learn from and get better from and that’s what we’re going to continue to do.”

Michel was limited last week in practice after rushing for 117 yards against the Raiders, a performance that included the two longest runs of his career. He was questionable on the final injury report, then downgraded to out on Monday, shortly after the Patriots and Chiefs learned nobody else had tested positive for COVID-19 and that their game was on.

That left Hoyer and Stidham without one of the most dynamic pieces of the Patriots offense.

“I definitely think as a competitor you want to be suiting up on the field every single game,” said Stidham, adding he and Hoyer took all the scout-team reps in practice this week, forcing them to adjust to the game plan during virtual meetings the past few days. “Going further down the road, I’m just going to find a way to get better.”

The Chiefs were without Pro Bowl defensive tackle Chris Jones, who was hobbled against Baltimore by a groin injury and did not practice throughout the week. They also lost defensive end Mike Danna to a hamstring injury during the game.

That was nothing compared to the pieces the Patriots were missing, though.

Damien Harris came off injured reserve after having surgery on his finger, and he ran 17 times for 100 yards to provide a bright spot in Michel’s place. Rex Burkhead added 11 carries for 45 yards while James White, who missed two games due to the death of his father, added 21 yards rushing and seven catches for 38 yards in the passing game.

“I’m doing all right. Just trying to take it day by day,” said White, who teared up while talking about his dad. “Honestly, all that stuff still kind of seems surreal to me. My mom’s continuing to improve and progress, so that eases my mind a little bit. Being back on the football field kind of eased my mind, too. So I’m just trying to push through. That’s what my dad would want me to do. I’m just trying to find a way to just look at all the positives in my life.”

The Patriots have no way of knowing just how long Newton and Michel will be out, which means Hoyer and Stidham — and all those running backs — will have to be ready for the Denver Broncos on Sunday.