Pence comes to Georgia as calm before potential Trump storm 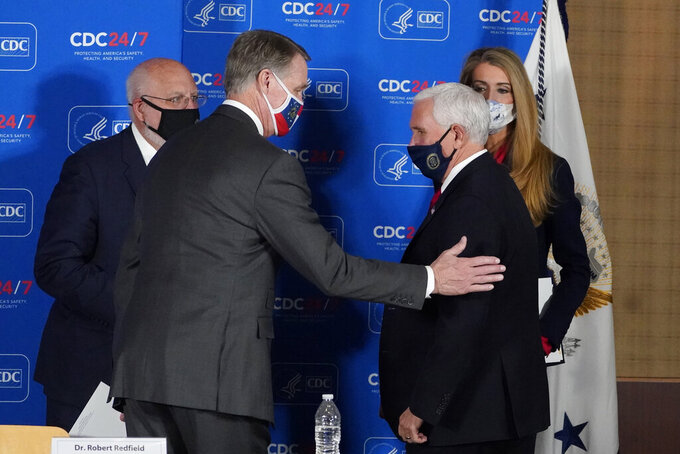 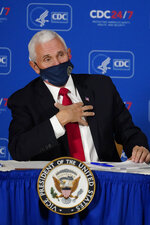 ATLANTA (AP) — Ahead of President Donald Trump wading into two high-profile Georgia Senate runoffs this weekend, Vice President Mike Pence on Friday urged Republicans to form a united front in the contests that will determine which party controls the Senate in January.

Pence campaigned Friday with Sens. David Perdue and Kelly Loeffler, with the GOP roiled by Trump’s continued denial of his own defeat and his baseless attacks that Republican officials in Georgia, including the governor and secretary of state, enabled widespread voter fraud on behalf of President-elect Joe Biden. There have even been suggestions from some Trump allies that conservative voters should sit out the Jan. 5 Senate runoffs in protest, a notion Pence took head on.

“I know we’ve all got our doubts about the last election, and I hear some of you saying, ‘Just don’t vote,’” Pence declared in Savannah. “My fellow Americans, if you don’t vote, they win.”

Democrats countered with their own show of unity, as former President Barack Obama appeared in a virtual rally with Democratic challengers Jon Ossoff and Raphael Warnock. Biden, meanwhile, confirmed to reporters in Wilmington, Delaware, where he has based his transition, that he will come to Georgia ahead of the runoffs, though he didn't say when.

The flurry of top-flight surrogates underscores the stakes and why some Republicans remain concerned that Trump's emphasis on his own political prospects threatens the GOP's Senate majority.

“We cannot just sit back and not vote,” Republican Rep. Buddy Carter told those gathered to hear Pence on Friday afternoon in Savannah. “We’ve got to get out.”

Bubba McDonald, a Republican who faces a Public Service Commission runoff election in January alongside the senators, was more direct, imploring Republicans angered over the presidential election to “please get over it” and return to the polls.

Talking to Democrats, Obama struck a different tone, celebrating Biden's Georgia win but warning it's not enough. “Georgia is going to determine ultimately the course of the Biden presidency,” Obama said, reminding Democrats how Sen. Mitch McConnell stymied his agenda as majority leader.

Republicans to need one more seat to allow McConnell to maintain his majority leader post and block Biden’s priorities. Democrats need to win both seats to force a 50-50 Senate and set up Vice President-elect Kamala Harris to tilt the chamber to Democrats as the tiebreaking vote.

The main runoff pitch for Republicans is that a GOP Senate is necessary to keep Democrats from absolute control. But that's a delicate argument since it tacitly admits Biden's victory even as Trump refuses to concede.

Pence, as he did two weeks ago when campaigning with the Georgia senators, tried to strike a balance. He told Republicans they could “stay in the fight for the integrity of our elections” while also fighting for Perdue and Loeffler.

But this time, Pence's message comes as Georgia completes yet another recount of presidential ballots and in the wake of Trump escalating his attacks on Georgia Republicans. The president recently called Gov. Brian Kemp “hapless” and dubbed Secretary of State Brad Raffensperger “an enemy of the people.”

Trump has tweeted in support of Perdue and Loeffler, but has spent more energy falsely suggesting that Kemp and Raffensperger have the legal authority to reverse Biden’s victory in Georgia. State law gives them no such option. Initial returns showed Biden with a lead of more than 14,000 votes out of about 5 million cast. An initial hand recount put Biden’s margin at about 12,500. As Pence arrived in the state, Georgia officials were in the final stages of a third count requested by Trump’s campaign.

That leaves Republicans in Washington and Georgia concerned that Trump will use a Saturday rally in Valdosta, Georgia, to air his own grievances and conspiracies rather than stoke GOP enthusiasm about the runoffs.

“They are hyper aware of Trump’s latest comments and latest tweets and the negative impact it could be having,” said Republican donor Dan Eberhart of the senators’ advisers. “And those folks go to bed every night hoping there’s no Trump tweet while they sleep.”

White House press secretary Kayleigh McEnany dismissed such concerns but embraced the idea that Trump can make or break the runoffs for Republicans.

“The president’s presence in Georgia will push Sens. Loeffler and Perdue over the finish line,” she said Friday, crediting the president with Republican turnout that narrowed House Democrats' majority and delivered victories for several vulnerable Senate Republicans.

A pall was cast over Pence’s visit after confirmation that a Loeffler campaign aide, Harrison Deal, was killed in an automobile accident. Loeffler and Perdue greeted Pence together late Friday morning at Dobbins Air Reserve Base north of Atlanta before the trio headed to the U.S. Centers for Disease Control and Prevention, where the vice president and the senators discussed the coronavirus pandemic and the development of vaccines. But Loeffler changed her plans and did not attend the Savannah rally after learning of Deal's death.

The accident also kept Kemp, who counted Deal as a family friend, from greeting Pence in Savannah.

Earlier, the governor had noted that Friday marked one year since he named Loeffler as his choice to fill the Senate vacancy created by Republican Sen. Johnny Isakson’s retirement.

“I’m proud of what Kelly has accomplished but there’s more work to be done,” Kemp said via his official Facebook page. “Let’s unite as Georgia conservatives and send Kelly Loeffler and David Perdue back to Washington.”