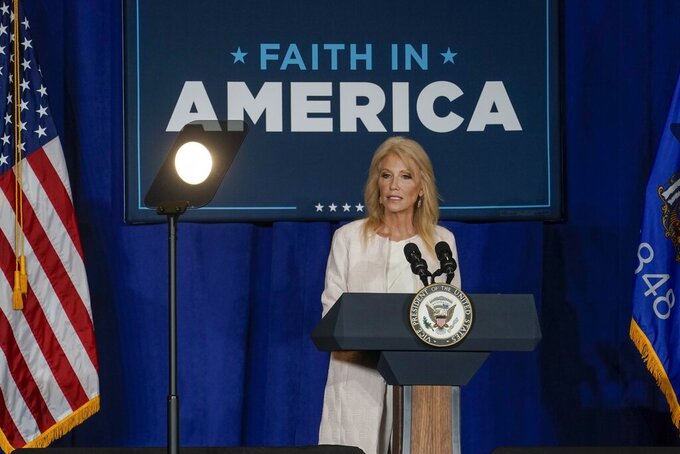 MADISON, Wis. (AP) — Vice President Mike Pence launched a faith-centered tour in a conservative Milwaukee suburb on Tuesday, touting what he called the “great American comeback” as a couple of hundred attendees, most not wearing masks, cheered and chanted “USA!” and “four more years!”

Pence's visit came two days before President Donald Trump was set to campaign in northeast Wisconsin. The dual visits in one week speak to Wisconsin's importance in the presidential race. Trump carried the state by fewer than 23,000 votes in 2016.

“Wisconsin, I need you to bring it,” Pence told the “Faith in America” crowd of about 200. “The silent majority can be silent no more.”

The crowd huddled close together after the event to get close to Pence, who posed for pictures and mingled with attendees for several minutes. The nation’s top health experts have urged people to wear masks and maintain a 6 foot distance from others to avoid spreading the virus, but there is no requirement to wear a mask in public in Wisconsin.

The event highlighted the central position that religious conservatives — particularly white evangelicals, but also right-leaning Catholics — continue to occupy in the president’s base. Trump was at a Phoenix megachurch on Tuesday.

Officials checked the temperatures of attendees before they entered and those who reserved tickets had to agree not to sue the Trump campaign if they become sick. The campaign required attendees to sign a similar waiver before its rally in Oklahoma on Saturday. In addition to 200 people in the main room, there were about 150 in an overflow room.

Pence, who led the president’s COVID-19 task force, did not wear a mask at the rally, even as he talked about combating the virus. He downplayed spikes in cases across the country, particularly in the southeastern U.S., and instead emphasized states that have been reopening.

“Under the president’s leadership we met this moment and we’re meeting this moment,” he said. “The great American comeback has begun and President Trump is leading the way.”

Pence said that Americans had “forfeited some of our personal freedom to put the health of our families and our neighbors first” and “we’re going to continue to use common sense as we go forward.”

His comments came shortly after Dr. Anthony Fauci, the government's top infectious disease expert, testified before a House committee that the next few weeks will be critical to tamping down coronavirus hot spots around the country. Fauci has recently warned that the U.S. is still in the first wave of the pandemic and has continued to urge the American public to practice social distancing.

Biden campaign spokeswoman Kate Bedingfield derided the Pence visit as an attempt to “clean up Trump’s mess.” She called the president’s handling of the pandemic “catastrophic,” referring to Trump’s recent comments about wanting to slow down testing.

Pence said Trump has fought to protect religious freedoms, and he credited the president with quelling violent protests after the killing of George Floyd.

Trump drew widespread criticism after federal law enforcement officers forcibly pushed back peaceful protesters across the street from the White House. After the protesters were removed, Trump walked to St. John's Church and awkwardly held up a Bible.

At Pence’s first Wisconsin event, inside the Waukesha STEM Academy, no one on a panel about school choice wore masks. Pence was joined on the panel by U.S. Education Secretary Betsy DeVos, Trump adviser Kellyanne Conway, and parents and local education leaders for the discussion.

Pence advocated for passing a $5 billion federal tax credit program that would pay for scholarships to private and religious schools.

School choice — which includes private school vouchers, charter schools and other nontraditional options — has long been an issue that divides Republicans and Democrats, particularly in Wisconsin. Conservatives have championed offering students an alternative to public schools, while Democrats argue it takes away needed resources from public schools with less accountability.

Both of Tuesday's events are in Waukesha County, a stronghold of Republican support in Wisconsin. Trump carried the county with 60% of the vote, under-performing Republican Mitt Romney's showing in 2012. Doing better in the Milwaukee suburbs is one part of Trump's strategy for winning Wisconsin.