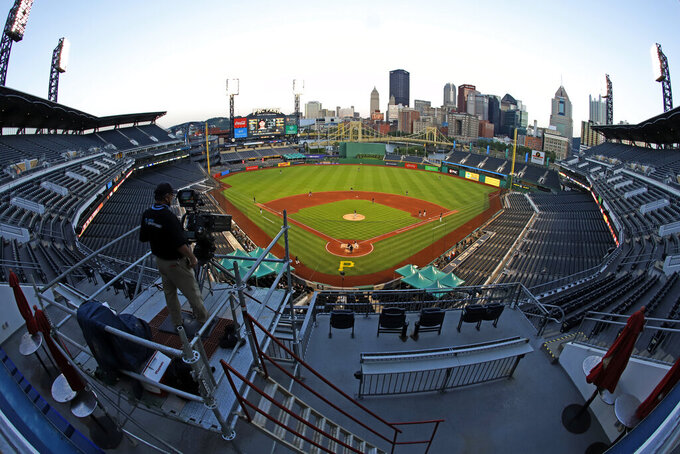 TORONTO (AP) — The state of Pennsylvania won't allow the Toronto Blue Jays to play at PNC Park in Pittsburgh amid the coronavirus pandemic, health officials announced Wednesday, becoming the second jurisdiction to say no to the team as the baseball season begins this week.

Canada already denied the Blue Jays’ request to play in Toronto because the regular-season schedule would require frequent travel back and forth from the United States, where COVID-19 cases are surging.

The Blue Jays and Pirates had been waiting to see if they got permission from Pennsylvania officials to proceed with the plan to have PNC Park fill in for the Rogers Centre as the Blue Jays' home stadium.

“In recent weeks, we have seen a significant increase in the number of COVID-19 cases in southwestern Pennsylvania,” Dr. Rachel Levine, the state's secretary of health, said in a statement. “To add travelers to this region for any reason, including for professional sports events, risks residents, visitors and members of both teams. We know that this virus does not discriminate, and can even make professional athletes very sick. We are committed to protecting the health and well-being of all Pennsylvanians.”

A source familiar with the matter told The Associated Press the Blue Jays are now engaged in talks with the Baltimore Orioles about playing “home games” at Oriole Park at Camden Yards. The official said the Orioles are trying to help Toronto however they can but says there are lots of logistics to be worked through yet in terms of feasibility. The official, who spoke on condition of anonymity because they were not authorized to speak publicly on the matter, said the Blue Jays are working on other contingencies, too.

Canada has flattened the epidemic curve. But the number of new confirmed cases of the coronavirus reported daily by Allegheny County — which includes Pittsburgh and 1.2 million residents — has increased tenfold in the last two weeks, compared with the two weeks in June before what officials there called an alarming spike in cases.

Health officials have blamed the spread primarily on bars and restaurants that were ignoring social-distancing orders, as well as residents returning from travel to virus hot spots. To clamp down on the spread, health officials have issued a cascade of orders shutting down bars and restaurants, curtailing dine-in service and recommending that people returning from certain states self-isolate at home for 14 days.

The agreement to share the stadium with the Pirates was pending state approval, according to two officials familiar with the matter who spoke to The Associated Press on condition of anonymity earlier Wednesday because they were not authorized to speak ahead of the government decision.

Pirates President Travis Williams said the organization worked closely with city officials to get a proposal ready for the state to review. The state ultimately decided to pass.

“This is an unprecedented situation and, therefore, we understand and support Gov. Tom Wolf’s decision,” Williams said in a statement. "We are in agreement that the safety and health of those in our region must remain paramount. We are confident that the great people within the Blue Jays organization, working with Major League Baseball, will secure another option very soon.”

Better hurry. Toronto opens the regular season on Friday at Tampa Bay. The home opener is scheduled for next Wednesday against the World Series champion Washington Nationals.

“Everybody would love to have a home game, but that might not be an option,” Blue Jays manager Charlie Montoyo said Wednesday evening. "Who knows? We could be playing games on the road the whole year. I’ve never gone through this, not with two days to go, not knowing where you’re going to play home games.”

Atkins said if the Blue Jays can’t find a major league park, their Triple-A affiliate in Buffalo, New York, would be their most likely site for home games. But based on what the players want and the collaboration they are getting from other teams and MLB, Atkins said the Blue Jays are focused on major league parks, as long as they can be safe. He said health and safety is the priority, so the ability to be socially distant without comprising other teams’ ability to maintain social distance is important.

If a major league stadium can't be found, the Blue Jays could be facing a 60-game road trip, playing opposing teams in their own ballparks instead of a home park.

“Of course it is difficult because there are still uncertainties. We just have to remember that we’re going to grind for two months instead of a regular, 162-game season. If we can rally together and work as a team, I think we should get by fine,” pitcher Hyun-Jin Ryu said through a translator.

“This is something that we’ve never had to deal with in the past. Honestly, this season is all about new experiences and overcoming them. It’s going to be difficult but I do trust my teammates. I think we’ll have to rally around, just because it’s an unprecedented season.”