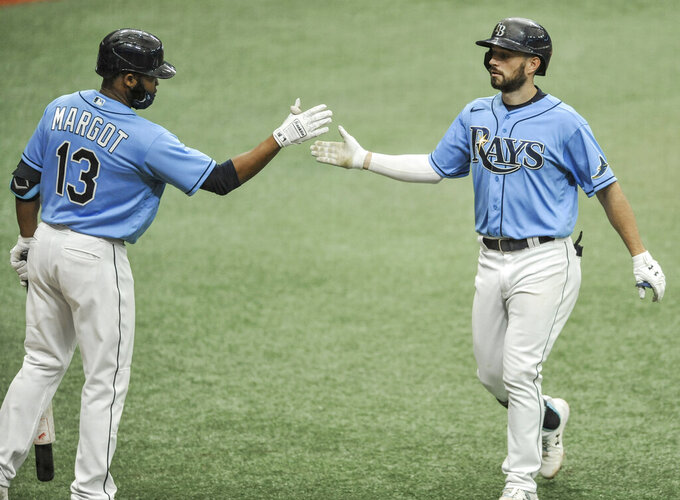 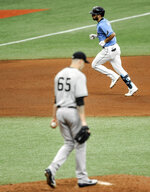 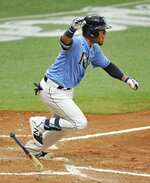 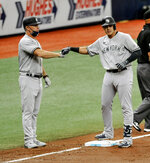 Mike Brosseau started the ninth with a double off Zack Britton (0-1) but was thrown out at third on Brandon Lowe's grounder. Lowe advanced to second on a wild pitch before Manuel Margot walked.

After both runners advanced on Willy Adames' grounder to first, Perez lined a single to right as the Rays took three of four from the AL East leaders.

“I was just trying to put the ball in,” Perez said through a translator.

Perez drove in the only run on a sacrifice fly in the Rays' 1-0 victory over New York on Friday night, which was his 28th birthday.

Brosseau and Lowe both homered in the seventh, when the Rays tied it at 3.

Rays starter Charlie Morton left with right shoulder inflammation after giving up a leadoff walk to Aaron Hicks in the third. The 36-year-old right-hander went 16-6 last year in his first season with Tampa Bay.

“I don't feel like it's a big deal,” said Morton, who first felt some tightness in the second inning.

Yankees starter James Paxton took a one-hitter into the seventh before allowing a leadoff double to José Martínez. With one out, Brosseau hit a two-run homer, and two pitches later, Lowe connected for a solo shot.

“Yeah, it definitely stings," New York manager Aaron Boone said. “We had a chance to really salvage the trip. They put some good at-bats together to get back into the game. We take away a lot of good from the way Pax threw the ball."

Tampa Bay loaded the bases with one out in the eighth and appeared to go up 4-3 when Hunter Renfroe was ruled safe at first on a potential double-play grounder. The Yankees challenged the call and it was overturned after a video review.

The Yankees took a 3-0 lead in the fifth when Margot misplayed Gio Urshela's fly ball on the warning track in center field for a three-base error with two outs that allowed two runs to score.

Margot was reinstated from the coronavirus-related injured list before the game. He was required to undergo intake screening after going to the Dominican Republic following the death of his father.

The Yankees loaded the bases with one out in the first but scored just one run when Mike Ford was hit by a Morton pitch.

Morton allowed one run and three hits in two-plus innings.

Both benches came alive when Paxton walked off the field after being replaced following Lowe's homer.

“They've been chirping the whole weekend.” Lowe said. “We chirped at them one once and they kind of get upset about it.”

Paxson called it “some jawing” between the teams.

The Rays designated Sean Gilmartin for assignment. He is married to White House press secretary Kayleigh McEnany. The lefty made one appearance this season, allowing three runs and five hits over 3 1/3 innings in Game 1 of Saturday’s doubleheader.

Yankees: OF Giancarlo Stanton was placed on the 10-day injured list with a left hamstring strain. He will have an MRI on Monday. ... Closer Aroldis Chapman (coronavirus) will throw to hitters on Tuesday.

Rays: LHP Ryan Yarbrough (0-2) is the scheduled starter against Boston on Monday night in the first of four games at Fenway Park.