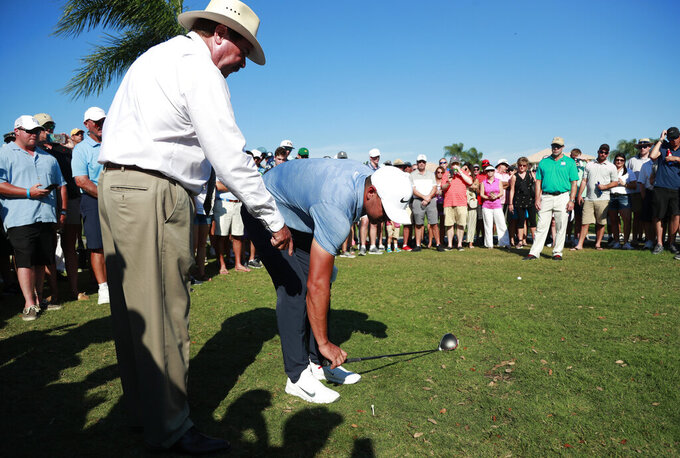 FILE - In this March 2, 2019, file photo, Brooks Koepka, center, takes a drop from out of bounds on the 12th hole as PGA rules official Slugger White, left, looks on during the third round of the Honda Classic golf tournament, Saturday, in Palm Beach Gardens, Fla. Russell is retiring after 40 years as a tour rules official. (AP Photo/Wilfredo Lee, File)

ORLANDO, Fla. (AP) — For Mark Russell and Slugger White, getting into the business as a PGA Tour rules official was a lot easier decision than getting out.

With some 80 years of experience between them — Sam Snead was still playing the occasional tournament when they started — Russell and White are moving toward retirement from their official titles of vice president of competitions.

Russell says he will stay on as a consultant during the transition. White plans to work about 10 or so events next year, making himself available if the need arises.

White played on the PGA Tour for parts of four years in the late 1970s, before the all-exempt tour began, only twice cracking the top 150 on the money list.

“I found out I wasn’t quite as good as I thought I was, I guess,” White said with a laugh.

For more details on his career record, look for “Carlton” White. His father was a boxer and kept in touch over the years with one opponent who signed his correspondence “Slugger.” That became White’s name from the time he was a day old.

White’s father was a stickler for the rules, and White thought he knew them well when he decided to join the PGA Tour.

The toughest ruling he had to enforce was against Kevin Stadler in Las Vegas, when it was discovered a club was slightly bent on the first hole. How it got damaged — remember, this was only the first hole — remains a mystery. But the penalty was disqualification (that was one of the rules changed in the recent overhaul; now it’s a two-shot penalty).

Russell was a teaching pro at Disney who later became the golf director of the three courses and served as chairman of the Walt Disney National Team Championship. Clyde Mangum, the deputy commissioner in charge of rules and operations, offered him a job and Russell didn’t look back.

His most memorable ruling was among the more famous on the PGA Tour. Russell got word on the radio of a television clip showing Craig Stadler on his knees to play a shot from under a tree at Torrey Pines in 1987. He placed a towel under his knees to keep his pants clean from the rain-softened turf. He was guilty of building a stance.

“I knew right then he was disqualified,” Russell said. “We were trying to figure out a way to get him out of it. But reading the rules, there was no way out. We told him in the scoring area.”

Russell also remembers the TV interview he gave. Rules officials are never on TV unless something has gone wrong.

The move toward retirement comes a few months after John Paramore and Andy McFee retired as chief referees on the European Tour. All four are close friends and have a combined total of roughly 160 years of experience.

“Forty years is hard to believe,” Russell said. “I don’t think it will ever happen again. It would take a young guy in the right place at the right time.”

The transition on the PGA Tour means Gary Young will oversee the rules and tournaments administration, effectively the role White and Russell shared. He has appointed four officials as senior tournament directors — Steve Rintoul, John Mutch, Stephen Cox and Ken Tackett. Also, Mike Peterson, Pete Lis and Jordan Harris are moving from the Korn Ferry Tour to the PGA Tour as rules officials.

The interest in Tiger Woods competing with 11-year-old son Charlie in the PNC Championship is best measured by clicks.

The PGA Tour said the video of Charlie hitting 3-wood to 4 feet for an eagle in the first round was its top-performing Instagram post of all time measured by engagements. By Tuesday afternoon, the numbers were still going. The previous post with the most engagements was the Tiger Woods 2010 Masters champion graphic.

The social media team also created a “copy cat” post that shows the mannerisms of Woods and his son side-by-side. The tour said that became the top-performing tweet for the PGA Tour, also surpassing the Masters graphic. And on TikTok, the “copy cat” post already has more than 12 million views, second all-time.

The PGA Tour shut down for three months because of the coronavirus pandemic. The LPGA Tour was out of business for more than five months. So it was natural to expect players would want to make up for lost time when golf returned.

Celine Boutier and Cheyenne Knight took that to heart.

They were the only players to compete in all 18 events on the LPGA Tour schedule this year, including the first four — two in Florida, two in Australia — before golf was halted.

Sungjae Im continues to be the ironman on the PGA Tour. From the time golf returned in June at Colonial, he played 20 out of the 25 weeks available. That’s just on the PGA Tour. Im then finished out his year by flying to Dubai for the DP World Tour Championship on the European Tour.

Jin Young Ko knows how to pick the right friends when it comes to putting.

A year ago, she spoke about studying YouTube video of Brad Faxon from ages 15 through 19, and what a thrill it was to meet him at the U.S. Women’s Open when Fox Sports was broadcasting it in 2018. “He’s good. Sexy,” she said, a reference to his silky putting stroke that came out the wrong way.

This year at the CME Group Tour Championship, she met Steve Stricker, who was helping with the broadcast, and told him she was a big fan.

A Lim Kim didn't waste any time joining the LPGA Tour. She notified officials a week after her U.S. Women's Open victory that she was taking up membership. ... The British Open has reserved spots for all players who would have been in the field had it not been canceled this year. Among the changes are to take the top 30 from the Race to Dubai and FedEx Cup from 2019, along with the top 10 from the points races this year. Harris English was No. 7 going into the Tour Championship and wound up 11th. ... Inbee Park ends the year up 12 spots to No. 3 in the women’s world ranking, giving South Korea the top three spots. Jin Young Ko and Sei Young Kim are Nos. 1-2.

With a tie for second in the U.S. Women's Open and a victory in the CME Group Tour Championship, Jin Young Ko $1,587,286 in the last two weeks, more than anyone else had made all year.

"I must admit it is nice to beat kids who weren’t born when I won my first tournament.” — Lee Westwood, 47, after becoming the European Tour's No. 1 player for the third time.