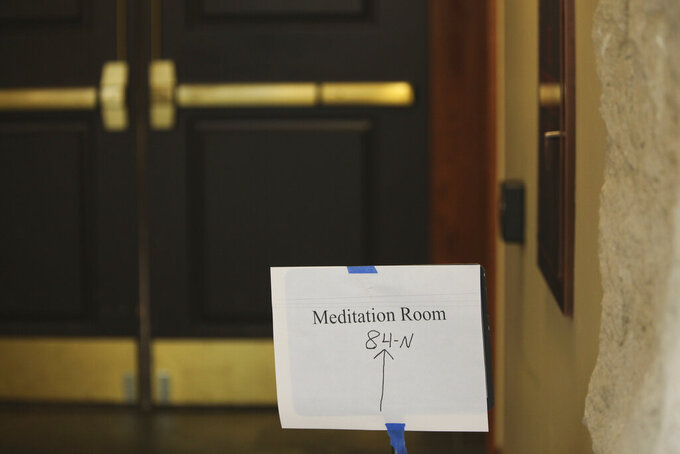 This Friday, May 28, 2021 photo shows a sign directing visitors to a meditation room through double doors to a hallway in the basement of the Kansas Statehouse in Topeka, Kan. The room once was located on the second floor, but Democratic Gov. Laura Kelly moved it to the basement to create more space for her staff, and the room's location has become a point of dispute between her and Republican lawmakers. (AP Photo/John Hanna)

TOPEKA, Kan. (AP) — Republican legislators have hatched a plan for returning the Kansas Statehouse's meditation room to its original spot after Democratic Gov. Laura Kelly moved it to create more space for her staff.

Senate President Ty Masterson, an Andover Republican, outlined the proposal this week during a meeting of top lawmakers. A decision is likely later this year.

The GOP-controlled Legislature wanted space for prayer in 2012 when then-Republican Gov. Sam Brownback created a meditation room on the Statehouse's second floor. That's where the governor and governor's staff have offices.

GOP legislators included provisions in annual state budgets to keep the room there. But they forgot last year, allowing Kelly to commandeer their prized space.

Kelly expanded her constituent services team to help during the coronavirus pandemic and said they needed to social distance.

The meditation room moved to an out-of-the-way spot in the basement occasionally used for shooting videos and television interviews. GOP lawmakers responded this year with a budget provision to reclaim the second-floor space, but Kelly vetoed it.

Masterson's plan would give the governor's staff a different second-floor suite now used by House members. That would prompt other space swaps involving them, senators, their clerks and State Library staffers.