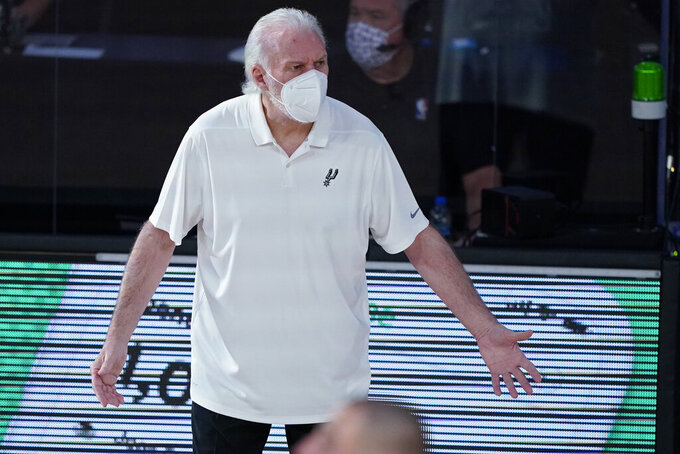 FILE - In this Aug. 2, 2020, file photo, San Antonio Spurs coach Gregg Popovich reacts during the first half of the team's NBA basketball game against the Memphis Grizzlies in Lake Buena Vista, Fla. For NBA coaches, masks are required this season. Jackets are not. Rules for coaching attire will be relaxed by the league this year, though not as much as was the case during play at the bubble at Walt Disney World this past summer. Suit jackets or sport coats will not be required — but coaches won’t be able to wear the short-sleeved shirts that most donned for games in the bubble, either. (AP Photo/Ashley Landis, Pool, File)

SAN ANTONIO (AP) — The NBA restart proved to be just that for the San Antonio Spurs.

Flush with athletic wings, San Antonio used its eight games in Florida to develop its young talent and experiment with a smaller lineup. The Spurs failed to qualify for the postseason, but found the new look was something they liked.

The Spurs are fully embracing the change, especially in a league filled with position-less lineups and high-scoring wings are prized. It is a much differnt look for coach Gregg Popovich, who used the height and might of David Robinson and Tim Duncan to win the team's first NBA title in 1999.

“The bottom line, in all frankness is, I don’t remember winning a championship last year,” Popovich said. “I don’t remember being in the playoffs. It’s time to make a change. Play a different way. Demand it and move forward.”

San Antonio, which finished 5-3 in Orlando, found the team excelled with Derrick White, Dejounte Murray, Lonnie Walker and Keldon Johnson playing alongside a big man such as Jakob Poeltl in combination with veteran guard DeMar DeRozan.

“We were just more comfortable and freer in a sense,” said DeRozan, who returned after picking up his player option. “Just being thrown out there, kind of figuring out on the go with the young guys. Everybody was hungry. Our preparation before we started those bubble games made it a lot more exciting, fun to just get out there and play freely and it showed.”

The Spurs missed the playoffs for the first time since 1997, the season before they drafted Duncan with the No. 1 overall selection. The streak of 22 postseason appearances matched the NBA record set by the Philadelphia 76ers franchise.

San Antonio cemented its new direction by drafting guards Devin Vassell and Tre Jones last month. The Spurs have nine wings on their roster, including veteran Patty Mills, the final player tied to their last championship in 2014.

“The strategy, the philosophy, the way we play is going to stay the same (as in Orlando). Everybody is going to have to adjust to that,” Popovich said. “The guys did a great job. They enjoyed it. We changed our approach as far as practice is concerned, how we wanted to teach.”

Fully implementing the change could be a slow process considering the Spurs will start the season without White and Johnson. White is battling a toe injury and Johnson is out with an injured left foot.

The Spurs will still rely on traditional big men such as LaMarcus Aldridge, Poeltl, Rudy Gay and Trey Lyles, but they are all expected to alter their games accordingly. For Aldridge, that means he will likely eclipse his career-high of 157 3-point attempts that he set last year.

“I think L.A. will have no problem adjusting to how we play because he wants to win,” Popovich said. “He took a big step last year and he’s taking an even bigger step this year. His workouts all summer long and into the fall have centered around that. He has bought into that. He knows how much that can help.

The Spurs will not allow fans to attend their two home games in December out of precaution due to the COVID-19 pandemic. The team is planning on welcoming fans back to the AT&T Center on Jan. 1 for its matchup against the defending champion Los Angeles Lakers.

Any possible attendance will be limited and dependent on public health data and guidelines from San Antonio, Bexar County and state officials.

REMEMBER WHO YOU ARE

The Spurs re-signed Poeltl to a three-year, $26 million contract in the offseason. The fifth-year center from Austria has provided the team with solid defense and rebounding and been effective at setting screens and rolling to the basket.

Popovich is expecting more from the 25-year-old this season because he knows Poeltl is capable of doing so given his success collegiately with the Utah Utes.

“He was the Pac-12 player of the year, he actually scored points,” Popovich said, chuckling. “Maybe he’s gotten the impression that I don’t want him to (score), so that’s my fault, like he’s got to get the ball to score once in a while. He’s got to change his mentality to a degree. He’s not going to be our leading scorer, but to be a threat.”