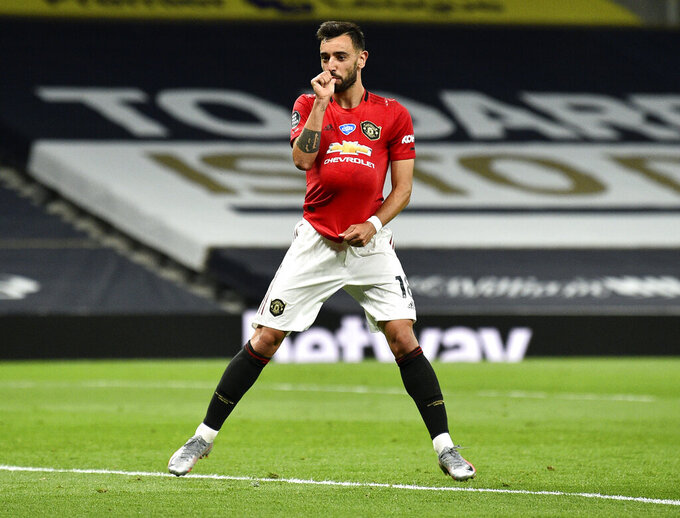 LONDON (AP) — Paul Pogba made an immediate impact on his return from surgery, earning a penalty converted by Bruno Fernandes that recovered for Manchester United a 1-1 draw at Tottenham in the English Premier League on Friday.

While the teams have endured three months without games in the pandemic, Pogba hasn't played since December. And he entered only in the 63rd minute at an empty Tottenham stadium with the hosts leading from Steven Bergwijn's 27th-minute strike through goalkeeper David de Gea's hands.

“David is disappointed with it but the ball was moving," United manager Ole Gunnar Solskjaer said.

Pogba, whose United future has been mired in uncertainty, helped to inject some attacking dynamism that United had been missing.

After Pogba was bundled off the ball by Eric Dier, Fernandes netted his third penalty since joining United in January.

“Paul showed some real quality out there,” Solskjaer said. "He contributed really, really much for us to get a point and maybe could have helped us to get the three points. He did everything a midfielder should do. He tackled, he won the ball. He played passes and he showed some skills, so fantastic to have him back.”

United was denied a second penalty when VAR overturned the decision to penalize Dier for another foul — this time on Fernandes.

United is three points behind fourth-placed Chelsea having played an extra game. But fifth place will clinch a Champions League spot if second-placed Manchester City's two-year ban from Europe is upheld next month for breaking financial rules. Tottenham remained four points behind United.

The start of the game saw players immediately take a knee as part of the Black Lives Matter protests.