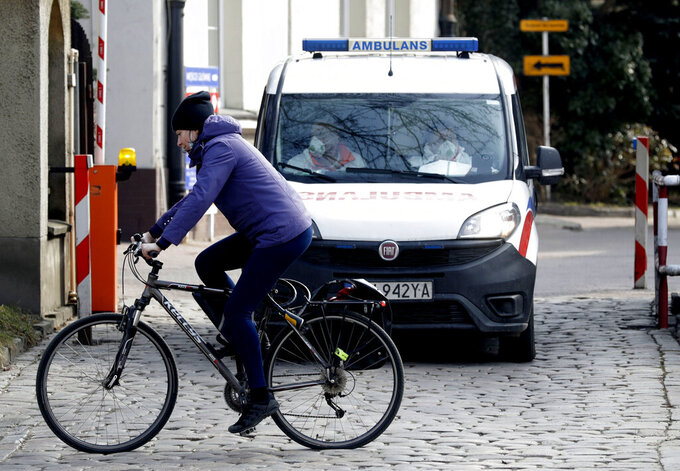 A cyclist passes in front of an ambulance by an infectious diseases hospital in Warsaw, Poland, on Thursday, March 25, 2021. Amid a sharp spike in new infections and hospitalizations that are bringing the health care to its limits, Poland has stepped up pandemic measures for two weeks starting Saturday, including fewer people to be allowed into churches at the holiday time. (AP Photo/Czarek Sokolowski)

Details of the new restrictions — which include the closure of nursery schools, furniture stores and beauty salons — come as Poland registered a record for daily coronavirus cases for a second consecutive day.

The new restrictions, which also include limits on the number of people in churches, take effect on Saturday and will remain in place until April 9. They come on top of other restrictions already in effect that have gradually been ramped up as infections, hospitalizations and deaths have mounted amid another surge of infections over the past several weeks.

Prime Minister Mateusz Morawiecki said he knew the more severe measures come during a period when families traditionally spend time together for Easter, and it would require a sacrifice from Poles. But he said the steps are needed to save lives, jobs and a health sector approaching the limits of its capabilities.

“We are one step away from crossing the border beyond which we will not be able to properly heal our citizens,” Morawiecki said. “We will do everything to avoid such a scenario.”

The Health Ministry said Thursday it recorded more than 34,000 new daily cases — thousands more than the 30,000 that set a bleak record on Wednesday. There were also 520 new deaths recorded Thursday.

“Poland is in the most difficult moment of the pandemic in 13 months,” Morawiecki said.

He hailed mass vaccination as the key to Poland eventually emerging from the pandemic, noting that medical workers, who have already been vaccinated in higher numbers, are already seeing a sharp drop in illness and death.

Elsewhere in the region, Hungary, with the world’s highest death rate per capita in recent days, set a record for daily deaths on Thursday with 252. That brings the death toll to nearly 19,000 in the country, whose population is less than 10 million.

In Poland, officials say this “third wave” of the pandemic is driven by the highly contagious virus variant first detected in Britain, which now makes up most of the new cases.

“The evolution of the virus and the British mutation is leading not only to more infections, but also causing more hospitalizations,” Health Minister Adam Niedzielski said.

Vaccine rollouts in Poland and much of the region are happening too slowly to hold back the new surge.

The higher numbers in Poland come amid more testing. The government has recently made it easier for people to get tested for COVID-19, dropping its earlier requirement for a doctor's referral and allowing people to request a test online.

In Hungary, additional lockdown measures introduced on March 8 haven't yet produced the desired results as the number of new infections and hospitalizations continue to dwarf previous peaks set in December, and hospitals have reported capacity problems as intensive care units fill up.