Poles protest abortion ban in churches and on streets 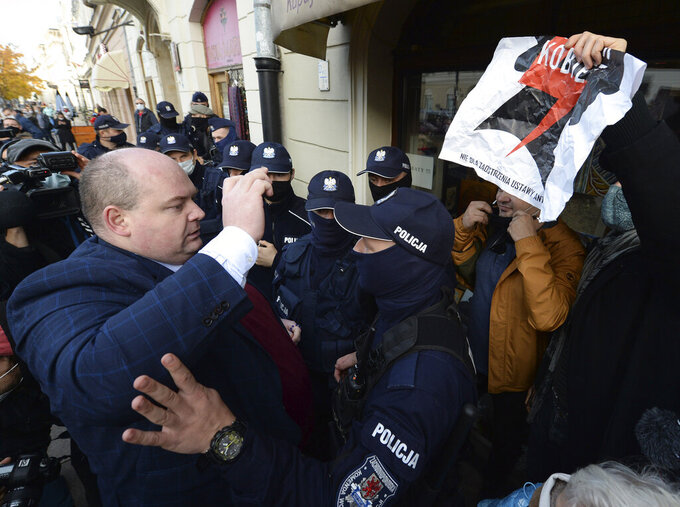 With the coronavirus surging in Poland, large protests also erupted for a fourth straight night in cities large and small across the nation, including in Warsaw, Gdansk and Poznan, where police on horseback guarded a church.

In the southern city of Katowice, tensions were high as a large presence of riot police separated protesters and about 30 people with the All-Polish Youth, a far-right ultranationalist group. Police used tear gas and scuffled with the women's rights protesters after they began to push the police toward the anti-abortion group, the RMF FM broadcaster reported.

At the Holy Cross Church in Warsaw, a group of far-right nationalists blocked stairs leading to the entrance. When one woman managed to push her way through, the nationalists grabbed her and forced her down the stairs.

A video posted from the northern Polish city of Szczecinek showed young women surrounding a priest and yelling at him to “Go back to the church” and to “F—- off.”

The actions on Sunday follow a ruling on Thursday by Poland’s constitutional court that declared that aborting fetuses with congenital defects is unconstitutional. Poland already had one of Europe’s most restrictive abortion laws, and the ruling will result in a near-complete ban on abortion.

TVN24, a private news station, broadcast images of farmers on tractors driving through the town of Nowy Dwor Gdanski in support of women's reproductive rights. A sign on one tractor said, “We want choice, not PiS terror.” PiS is the Polish acronym for the country’s conservative governing party, Law and Justice.

Scenes of angry young women entering churches and confronting priests with obscenities signals a dramatic historical change in Poland, where the Roman Catholic Church has been venerated for centuries as the highest authority and where such events would have been unthinkable not so long ago.

The Catholic Church earned respect during the communist era for supporting pro-democracy dissidents in their struggle for freedom, and the late Polish pope St. John Paul II is held up as a national hero.

But today, its authority is being challenged as it supports the country's right-wing government and struggles to manage a string of clerical abuse scandals.

Sunday's events marked a further escalation of a culture war in Poland as women's and LGBT rights activists have increasingly turned to more radical protest methods after feeling that years of lobbying for greater rights have not brought the desired results.

A young woman in one Warsaw church stood near the altar with a sign that said “Let's pray for the right to abortion.”

“The position of the Catholic Church on the right to life is unchanged; obscenities, violence and disrupting services as well as profanation are not the right method of action,” Gadecki said in a statement. “I ask everyone to express their views in a socially acceptable way.”

Women's Strike, the organizer of the protests, argues that forcing women to give birth to fetuses with severe defects will result in unnecessary physical and mental suffering.

The organization vowed more protests in the coming week, including blockades of cities on Monday, a nationwide strike by women on Wednesday and street protests on Friday.

The actions are planned at a time when the Polish government is struggling to contain escalating coronavirus cases and anger over restrictions causing economic pain.

Health Ministry figures show that 1,110 legal abortions were carried out in Poland in 2019, mostly because of fetal defects. The only other legal cases remaining for abortion are rape or incest or if the pregnancy threatens the woman's life or health.