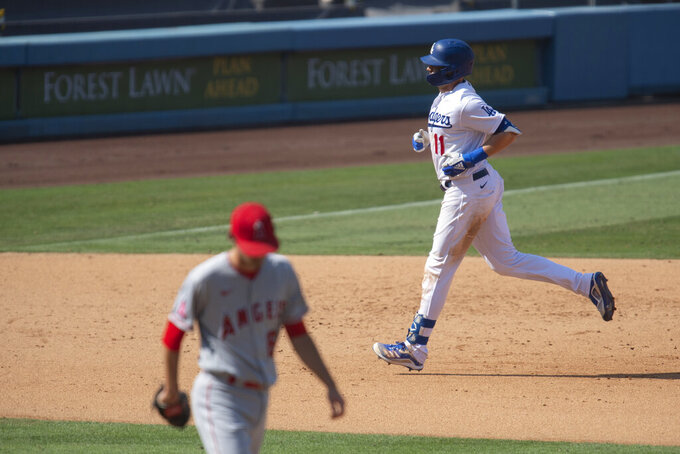 LOS ANGELES (AP) — AJ Pollock homered twice and the NL West champion Los Angeles Dodgers completed a three-game sweep of the Angels with a 5-0 victory on Sunday to end the pandemic-shortened regular season.

Pollock’s drive gave the Dodgers a major league-leading 118 homers. It was their fifth shutout victory; they went 15-1-4 in series this season.

The Dodgers won their eighth consecutive division title and finished 43-17 for the best record in the majors over the 60-game schedule. They were 106-56 last year playing a full 162 games. They’ll open the postseason on Wednesday against Milwaukee at home.

“It's been a fun season,” manager Dave Roberts said. “We can't wait until Wednesday. We feel we're the best team out there.”

The Angels stumbled to a 26-34 mark. They were 72-90 last year, finishing fourth in the AL West, the same result as this season. They were 0-6 against the Dodgers, losing every game for the first time since 1997.

“They beat us up in kind of a heavyweight manner and it definitely indicates to us exactly where we need to get some work done moving to next year,” said Joe Maddon, ending his first season in Anaheim as manager.

The Angels announced as the game ended that general manager Billy Eppler was fired after his fifth straight losing season.

Pollock started at leadoff in place of Mookie Betts, who is nursing a sore hip after getting plunked on Saturday. Pollock and Betts finished the season tied with a team-leading 16 homers.

“We have a lot of good power hitters on this team, not just Mookie,” Pollock said. “I’ve had stretches where I’ve felt like the power has always been there, it’s never really my goal. Just keep attacking the pitches I want to attack. If I do that, I know there's going to be some power numbers.”

Joc Pederson singled leading off the seventh and Pollock followed with a two-run shot over the wall in center.

The Dodgers added two more runs in the third to make it 3-0. Austin Barnes walked and scored on Corey Seager's RBI groundout to second as part of a double play. Justin Turner popped up to right fielder Jared Walsh, who lost the ball in the sun for an error, scoring Pederson, who walked. Turner was safe at first.

The Angels were limited to three hits without slugger Mike Trout in the lineup. He took the last two days off.

Victor González made his first career start for the Dodgers, tossing a scoreless inning with one strikeout before turning the ball over to Dustin May (3-1). The red-headed right-hander allowed two hits in four innings, struck out five and walked two.

Angels starter Patrick Sandoval (1-5) left the game with a strained left calf after giving up three straight walks that led to two runs with two outs in the third. The left-hander gave up three runs and one hit. He struck out three and walked three.

Maddon will soon head East in his RV, returning to his home state of Pennsylvania to help his granddaughter prepare to attend college. He plans on driving up to 7 1/2 hours a day during the 30-hour trip. “It's a great way to reflect, take your time and really there’s a lot of solitude involved,” Maddon said. “RVing has become more popular this year with the pandemic and I really look forward to it.”

Trout was voted by his teammates as the Angels' MVP for the ninth straight year, extending his franchise record. Trout hit .281, with 17 homers and 46 RBI in 53 games. Right-hander Dylan Bundy was voted the Nick Adenhart pitcher of the year. Bundy, scratched from his final start Saturday, finished 6-3 with a 3.29 ERA in 11 starts.

Dodgers pitcher Adam Kolarek took over right field in the eighth, but didn't have to make any plays.

The Dodgers posted a message on the video boards thanking all the cardboard cutouts for their support. The team sold the cutouts with photos of fans on them and donated the proceeds to the club's foundation. Each of the cutouts was authenticated with a tiny sticker on the back.

Angels: Visit the San Francisco Giants for their spring training opener on Feb. 27.