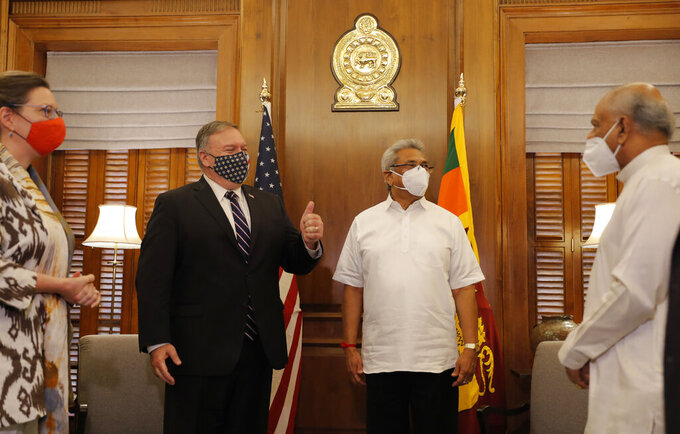 U.S. Secretary of State Mike Pompeo greets the gathering before his meeting with Sri Lankan President Gotabaya Rajapksa in Colombo, Sri Lanka, Wednesday, Oct. 28, 2020. Pompeo plans to press Sri Lanka to push back against Chinese assertiveness, which U.S. officials complain is highlighted by predatory lending and development projects that benefit China more than the presumed recipients. The Chinese Embassy in Sri Lanka denounced Pompeo’s visit to the island even before he arrived there, denouncing a senior U.S. official’s warning that the country should be wary of Chinese investment. (AP Photo/Eranga Jayawardena, Pool) 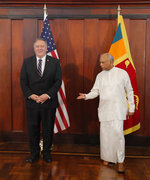 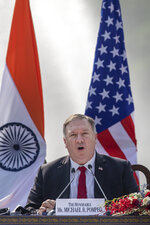 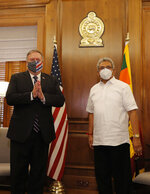 Pompeo is visiting Sri Lanka and the Maldives to press the two countries to be on guard against potential predatory lending and investment by China. He was making the case less than a week before the American election in which President Donald Trump is seeking to paint his rival, former Vice President Joe Biden, as weak on China and beholden to it.

Even before Pompeo arrived in Sri Lanka, China had fired back at the U.S. message, accusing Washington of bullying smaller nations. Pompeo, who will also visit the Maldives and Indonesia, will press each nation to push back against increasing Chinese assertiveness in the Indo-Pacific.

U.S. officials complain development and infrastructure projects benefit China more than the presumed recipients — a refrain Pompeo repeated with Sri Lankan Foreign Minister Dinesh Gunawardena. Pompeo said the country could be “a beacon” for freedom and democracy in the region as long as it retained its "full sovereignty.”

“That is quite a contrast to what China seeks," Pompeo said. "The Chinese Communist Party is a predator. The United States comes in a different way. We come as a friend and a partner.”

Gunawardena appeared unwilling to get involved in the spat with China, and said Sri Lanka is willing to cooperate with all friendly countries.

“Sri Lanka is a neutral, non-aligned country committed to peace,” he said. "We hope to continue in our relations with the United States and with other parties.”

Earlier this month, Beijing announced it would provide Sri Lanka with a $90-million grant to help rural development, after President Gotabhaya Rajapaksa sought help from a visiting Chinese delegation in disproving a perception that China-funded megaprojects are “debt traps.”

China considers Sri Lanka to be a critical link in its massive “Belt and Road” global infrastructure building initiative and has provided billions of dollars in loans for Sri Lankan projects over the past decade. The projects include a seaport, airport, port-city, highways and power stations.

Critics like the U.S. say that the Chinese-funded projects are not financially viable and that Sri Lanka will face difficulties in repaying the loans.

In 2017, Sri Lanka leased out a Chinese-built port located near busy shipping routes to a Chinese company for 99 years to recover from the heavy burden of repaying the Chinese loan the country received to build it.

Ahead of Pompeo's arrival in Colombo, the Chinese Embassy in Sri Lanka denounced his visit, accusing one of his top aides of making unacceptable threats against the country. In those comments, the top U.S. diplomat for South Asia, Dean Thompson, urged Sri Lanka "to make difficult but necessary decisions to secure its economic independence for long-term prosperity."

The Chinese Embassy said the comments were a “blatant violation” of diplomatic protocols and also chided the U.S. for organizing Pompeo’s 24-hour visit and imposing a major logistical burden on the country, which. like much of the rest of the world is in the midst of a spiraling surge in coronavirus cases.

“Does this approach truly prove your respect to the host country? Is it helpful to local epidemic prevention and control? Is it in the interests of the Sri Lankan people?” the embassy said in a statement.

The U.S.-China tug-of-war plays out against concerns that the Sri Lankan government is backsliding on democratic reforms. Last week, Parliament by a large majority approved a constitutional amendment concentrating powers under Rajapaksa and reversing efforts a previous government had made to curb authoritarianism.

With the change, Rajapaksa will be able to hold ministries, as well as appoint and sack ministers. He will also be the appointing authority of the elections, public service, police, human rights, bribery or corruption investigation commissions.

In his meeting with Rajapaska, Pompeo “stressed the importance of strengthening democratic governance, human rights protections, and of fundamental freedoms to ensure long-term stability and prosperity," the State Department said in a statement.

Sri Lanka has been ruled under a powerful executive presidential system since 1978, but a reformist government in 2015 clipped much of the president’s powers and gave them over to Parliament and independent commissions, saying successive presidents had been more authoritarian.

Pompeo arrived in Sri Lanka late Tuesday from India, where he and Defense Secretary Mark Esper had stepped up the Trump administration’s anti-China message by playing on Indian suspicions about the Chinese to shore up a regional front against Beijing in the Indo-Pacific.

Just hours before the meetings in New Delhi began, the Trump administration notified Congress of plans for a $2.37 billion sale of Harpoon missile systems to Taiwan — the second major arms sale in two weeks to the democratic island that Beijing regards as a renegade province. China angrily reacted to the first sale by announcing sanctions on U.S. defense contractors.