Pope voices 'affection' for Americans as he meets Blinken 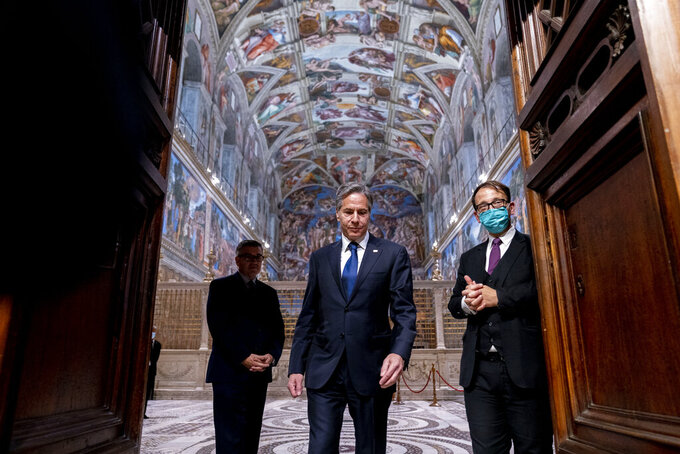 Secretary of State Antony Blinken, center, accompanied by tour guide Alessandro Conforti, right, and Chargé d'Affaires of the U.S. Embassy to the Holy See Patrick Connell, left, gets a tour of the Sistine Chapel at the Vatican in Rome, Monday, June 28, 2021. Blinken is on a week long trip in Europe traveling to Germany, France and Italy. (AP Photo/Andrew Harnik, Pool)

VATICAN CITY (AP) — Pope Francis on Monday voiced affection for the American people as he met at length with the U.S. secretary of state, the Vatican said, without indicating whether the two discussed the sharp divide among U.S. bishops over giving Holy Communion to politicians supporting abortion rights like President Joe Biden.

The pontiff accorded U.S. Secretary of State Antony Blinken a substantial chunk of time, especially in view of a government official who isn't a national leader.

The audience in the Apostolic Palace “played out in a cordial atmosphere,” a Vatican spokesman, Matteo Bruni, said. “It lasted about 40 minutes, and it was for the pope, the occasion to recall his 2015 visit and to express his affection and his attention to the people of the United States of America.”

Bruni was referring to the pontiff's U.S. pilgrimage, which included a meeting at the White House with then President Barack Obama. In recent years, the U.S. church hierarchy has been increasingly more polarized about U.S. politics and politicians.

Conservative U.S. bishops have been clamoring for clear directives against giving Holy Communion to U.S. political figures who are Roman Catholics and support women's right to abortion. Vatican teaching forbids abortion as a grave sin. This campaign has put the spotlight on Biden, a Catholic who has said that while he personally opposes abortion, he supports abortion rights.

Earlier this month, the U.S. churchmen decided to go ahead and craft a document laying out their line on the Communion-politician issue. Only a month earlier, Francis' top official on doctrinal orthodoxy had urged the bishops to think the matter through thoroughly and aim to keep divisions to the minimum.

Francis himself hasn't weighed in publicly on the latest developments within the heavily polarized U.S. Conference of Bishops, although in 2015 he issued a letter expressing compassion to women over the agonizing choice they face over abortion.

Blinken's staff didn't immediately give details on the papal audience.

Earlier at the Vatican, Blinken on Monday received VIP treatment, getting a private tour of the Sistine Chapel before he sat down for closed-door talks with Francis.

Blinken was the first high-level official of Biden's administration to have a private audience with the pontiff.

Last year, when Blinken's predecessor, Mike Pompeo, came to the Vatican, he wasn't granted private time with Francis. At the time, Vatican officials said that was because the Holy See didn't want to give any impression of favoritism only weeks before the U.S. presidential election that brought Biden to power.

But China was a thorny issue between both sides. Pompeo had blasted the Vatican for what he said was a lessening of its moral authority by signing an accord with Beijing over the nominations of Chinese bishops. Pompeo called on the Holy See to take a tougher stand against Chinese restrictions on religious freedom.

Biden, for his part, has criticized China for forced labor practices. Francis has championed human rights in many countries to draw attention to peoples' suffering.

On Monday, Blinken also met with the Holy See's No. 2, Cardinal Pietro Parolin, the Vatican's secretary of state, and with Archbishop Paul Gallagher, its foreign minister.

Blinken, Parolin and Gallagher in their session “discussed human rights and religious freedom in China,” Blinken spokesperson Ned Price said in a statement.

For his part, Blinken stressed U.S. support for a return to democracy in Venezuela “and our desire to help the Venezuelan people rebuild their country,” Price said. Global issues discussed also included migration and climate change — both matters close to the pope's heart. Also covered in the talks, Price said, were “efforts to expand distribution of vaccines against COVID-19.”

Many poorer countries are struggling to receive or buy enough supplies to make substantial progress in vaccination during the pandemic.

Blinken, in his talks with Parolin and Gallagher, “reaffirmed our shared efforts to promote religious freedom and combat human trafficking," both campaigns heavily promoted by the Vatican in recent years.

Visitors to the Sistine Chapel, with its ceiling frescoed by Michelangelo and a 30-by-60-foot wall painting, “Last Judgment,” by the Renaissance master almost always emerge wowed. Blinken appeared to be no exception after his short, guided tour.

Price tweeted that he and Blinken toured the “breathtaking Sistine Chapel.”

On more substantive matters, Price said in the tweet: “We are grateful to have the Vatican as a partner in promoting peace and human rights around the world.”

Blinken is visiting Rome before flying to southern Italy for Tuesday's Group of 20 meeting of foreign ministers, which is focused on improving collaboration among nations on climate change, health issues and development.