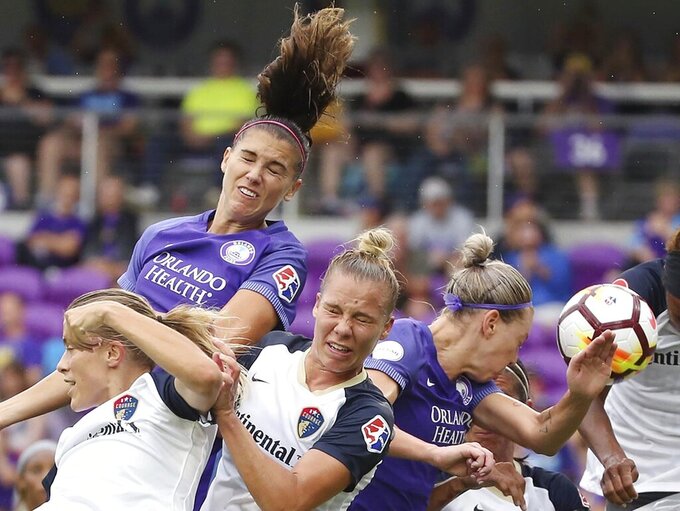 FILE - In this June 30, 2018, file photo, several players collide as Orlando Pride's Alex Morgan, top left, heads the ball toward the net during an NWSL soccer game against the North Carolina Courage at Orlando City Stadium in Orlando, Fla. The Pride have withdrawn from the upcoming National Women’s Soccer League tournament after six players and four staff members tested positive for COVID-19. The league says another round of testing will take place to confirm the results. (Stephen M. Dowell/Orlando Sentinel via AP, File)

The NWSL is the first U.S. professional team sport scheduled to return amid the coronavirus pandemic. The month-long Challenge Cup tournament is set to start Saturday in Utah.

Another round of testing will take place to confirm the results, the league said in announcing the positive tests Monday. Because of the number of positive results and the short time before the start of the tournament, the Pride withdrew.

The names of the players and staffers who tested positive were not released.

Among those on the Pride's roster are U.S. national team players Ali Krieger, Ashlyn Harris, and Emily Sonnett, as well as Brazilian star Marta.

The players who tested positive were asymptomatic. They will be isolated for 14 days and those they've come in contact with will be monitored.

A person with knowledge of the situation said Monday that a group of Orlando players had not maintained social distancing protocols and went to a bar or nightclub. It is not clear if that was tied to the positive tests. The person spoke to The Associated Press on the condition of anonymity because the information was not made public.

Orlando was supposed to play its first match Saturday night against the Chicago Red Stars.

“The health and safety of our players and staff is our number one priority and our thoughts are with those players and staff fighting this infection, as well as the entire club in Orlando that have been impacted as a result,” NWSL Commissioner Lisa Baird said in a statement. “We’re all obviously disappointed, but in the current environment, this is a situation that we have prepared for and we will now adjust our plans and schedules to reflect the circumstances.”

Orlando forward Sydney Leroux expressed her disappointment on Twitter. "I’m heartbroken. The majority of our team & staff worked our asses off to put us in the best position to play the game we love again. Not just for ourselves but for our families, friends, fans & our city. Good luck to the teams going to UT. Wish we were there with you. Stay safe,” she wrote.

The league said it would release a schedule for the eight remaining teams as soon as possible.

The NWSL had been scheduled to release the rosters for the participating teams Monday. Players are allowed to opt out of the tournament if they have health concerns, while still receiving their salaries for the season and insurance.

“This was obviously a difficult and disappointing outcome for our players, our staff and fans. However, this is a decision that was made in order to protect the health of all involved in the Challenge Cup,” said Amanda Duffy, the Orlando Pride's executive vice president. “While we were all excited to see the 2020 Pride on the field this weekend, our priority is now making sure our players and staff safely recover, and providing any support wherever and however possible.”

The Pride's players did not have contact with the club's affiliated Major League Soccer team, Orlando City SC. The Pride's training facilities are closed for cleaning and sterilization, the club said.